'Expect craziness' as China readies debut of Nasdaq-style board

By Samuel Shen and John Ruwitch SHANGHAI (Reuters) - In a packed Shanghai classroom on a hot afternoon, nearly a hundred "mom-and-pop" investors were honing their trading skills ahead of the first opening bell for China's Nasdaq-style tech board. They were learning survival techniques from veteran trader Shen Shikang, who predicted "a burst of stir-frying" -- quick buying and selling of stocks -- when trading starts on Monday. 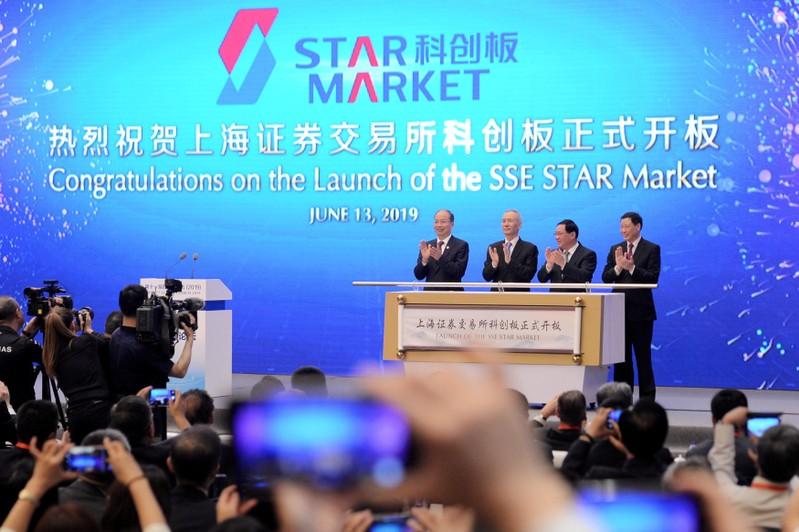 By Samuel Shen and John Ruwitch

SHANGHAI (Reuters) - In a packed Shanghai classroom on a hot afternoon, nearly a hundred "mom-and-pop" investors were honing their trading skills ahead of the first opening bell for China's Nasdaq-style tech board.

They were learning survival techniques from veteran trader Shen Shikang, who predicted "a burst of stir-frying" -- quick buying and selling of stocks -- when trading starts on Monday.

Markets are brutal, Shen warned, urging students to "be disciplined" and "cut their losses ruthlessly".

Eight months after President Xi Jinping unveiled plans for Shanghai's technology innovation board, the first batch of 25 companies - ranging from chip-makers to biotech firms - will debut on the STAR Market.

Modelled after Nasdaq, and complete with a U.S-style IPO system, STAR may be China's boldest attempt at capital market reforms yet. It is also seen driven by Beijing's ambition to become technologically self-reliant as a prolonged trade war with Washington catches Chinese tech firms in the cross-fire.

China's notoriously volatile stock markets are not for the faint-hearted. But with looser trading rules designed to give market forces a bigger role in setting prices on the new board, even seasoned investors are bracing for a wild ride.

"You will see kamikaze squads in this market, definitely," said investment banker Terence Lin, using a local term for groups of die-hard punters who drive share prices to the sky.

"Many Chinese retail investors buy stocks on recommendations from chat groups in social media such as QQ and Wechat, without even knowing what those companies are doing."

Regulators are calling for understanding.

"Initially, there could be trading imbalances between supply and demand, and the market should look at fluctuations in a reasonable way," Liu Ti, deputy general manager of the Shanghai Stock Exchange, told a recent forum.

The first batch of companies to list raised about 37 billion yuan ($5.38 billion), amid frenzied demand and some eye-popping valuations that in one case was 171 times earnings.

The IPOs were 1,695 times oversubscribed among retail investors, setting the stage for a scramble in the secondary market when trading begins.

Zhou Liang, founder of Shanghai Minority Investment Management, said he has a massive number of IPO shares which he plans to sell to hungry buyers.

There will be no daily price limits during the first five days of a company's listing, after which stocks will be allowed to rise or fall up to 20% in a day. Elsewhere in China, price gains are capped at 44% on debut, and limited to 10% swings in either direction thereafter.

And, for the first time, loss-making companies will be allowed to list in China, giving start-ups more access to funding. (For a FACTBOX with more details on the new market, see)

Reagan Li, fund manager at Shanghai V-Invest Co Ltd, expected "boisterous" trading initially. He said he would only buy shares of selected companies at reasonable prices, hoping "the market can give us such a chance."

China's previous attempts to create its own Nasdaq have largely floundered.

Shenzhen's tech-heavy ChiNext, designed to be a driver of innovation, was launched a decade ago, but became a hotbed of speculation and corporate cheating. Investor confidence has still not fully recovered after that bubble burst during the broader 2015 market crash.

An over-the-counter equity market, the New Third Board, saw a similar fate. After initial excitement, the board has been deserted by investors and issuers.

Having witnessed ChiNext's implosion, Luo Huasen said he has no plans to venture into STAR, at least initially.

"I suspect the craziness of this market will be beyond my understanding," said Luo, chairman of Shanghai Hengsui Asset Management. "I will stay on the sidelines."