Exoskeletons: Here is everything you need to know about these advanced mechanical 'exo-suits' and their uses

The main commercial prospects for exoskeletons are in areas such as construction, baggage handling and other heavy manual labour, researchers say. Exo-suits that raise productivity and reduce work-related injuries are less complex and face fewer regulatory hurdles than robotic suits designed for victims of spinal injury or stroke. 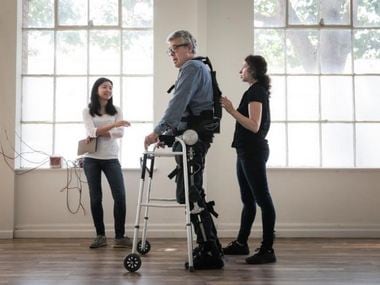 Advances in suits for industry “will speed the development of low cost, more functional rehabilitation/enable systems,” said Dan Kara, research director at technology market intelligence firm ABI Research. “It’s a virtuous circle.”ABI projects that robotic exoskeleton sales will jump from $97 million globally in 2016 to $1.9 billion by 2025. It predicts almost a quarter of the 100,000 suits sold in 2025 will be for people with disabilities.

Better and cheaper battery technologies and stronger, lightweight materials will help drive this growth, analysts say. Dozens of firms are developing medical exoskeletons, from start-ups to large companies like Korea’s Hyundai, which plans to launch a demo version of its H-Mex prototype in 2019. Soft exo-suits worn like garments are being tested in the university labs of ETH Zurich and Harvard.

Nasdaq-listed ReWalk Robotics is a market leader. Like most exoskeletons, ReWalk has a hard frame with motors at the hip and knee joints that enable users to get up and walk, mimicking a natural gait. A battery pack is worn on the back and crutches are used for balance. The U.S. Food and Drug Administration has approved the suit, with a list price of $77,000, for clinical and home use.

Competitors include Parker Hannifin with its $80,000 Indego, and similarly-priced Ekso by Ekso Bionics, a pioneer of exo-suit rehabilitation for stroke victims. The REX, made by New Zealand-based company REX Bionics, is self-balancing and requires no crutches. Its price starts at $99,000.

The Phoenix suit I tested uses two motors at the hips and mechanical hinges at the knee. SuitX, the company behind Phoenix, aims to sell the Phoenix at around $30,000 initially but wants to cut the price by about half over time, according to its chief executive, Homayoon Kazerooni, a professor at the University of California.

Kazerooni said that when the cost of an exoskeleton becomes comparable to the price of a powered wheelchair, health insurers could be persuaded to pay for exo-suits. “Technology has to reach people faster than the rate we see these days,” he said.