Engine giant Cummins has unveiled a Class 7 concept semi truck — dubbed AEOS — that runs completely on the power of an electric motor.

Engine giant Cummins has unveiled a Class 7 concept semi truck — dubbed AEOS — that runs completely on the power of an electric motor and a 140kWh battery pack, reports said on Wednesday. 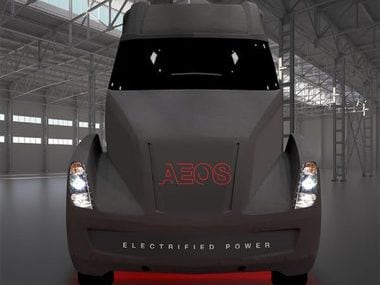 The unveiling of AEOS comes a few weeks ahead of Tesla's planned launch of an electric semi truck.

Cummins recruited engineering firm Roush to help design and build the concept semi truck. It would sell the semi truck to bus operators and commercial truck fleets starting in 2019.

"The Class 7 truck cab represents the 'stretch application' for a heavy-duty electric truck. An electric powertrain does not yet make sense for a Class 8 semi tractor-trailer, also known as an 18-wheeler, because of the larger loads they carry and the longer distances they travel," Thomas Linebarger, Chief Executive of Cummins, was quoted as saying by Forbes.

Tesla has been working on an electric semi truck since 2016 and had promised to unveil the big rig this September.

The company's chief Elon Musk had recently made some revelations about some of his newer projects that include its electric big rig.

Cummins has been working on fuel cells and electrified powertrains for about a decade.

Cummins said it is well-positioned to remain a leader despite competition from players like Tesla and Nikola Motor Company.