Musk just unveiled what is possibly the most powerful, highway-legal truck in the world and what could soon be the fastest production car in the world.

If you missed the launch of the electric Tesla Semi truck, you wouldn’t understand why we’re having to stop for a minute to let all the information digest.

Why? Because Elon Musk has just unveiled two of Tesla’s most awe-inspiring electric vehicles yet.

See, we’ve been expecting an electric truck from Tesla for a few months now and we expected it to be, well, a truck that runs on electricity. What we didn’t expect was what is possibly the most powerful, highway-legal truck in the world and what could soon be the fastest production car in the world. The truck is a wedge-shaped, streamlined powerhouse. Image: Tesla Inc.

First, let’s look at the stats of the Semi:

And all of this awesomeness is packed into a Class 8 semi-truck with a drag coefficient that’s lower than that of the $2 mn Bugatti Chiron with a 6.5-foot cab that you can stand in.

This is, frankly, incredible. It’s a vehicle that’s more exciting than any car we’ve ever seen. And it even comes with Autopilot.

The truck is, according to Elon Musk, a big contributor to pollution. They’re large, toxic machines that pollute the Earth. The Tesla Semi, as Musk puts it, runs on sunlight.

The six-wheeled semi is powered by four independent electric motors that draw power from a battery bank in the base of the vehicle. These are the same motors that power the Tesla Model 3, so we are, in effect, looking at a 1000 hp powertrain. As Wired notes in its preview of the vehicle, torque is more important for trucks, and that’s a figure that’s not been disclosed yet. 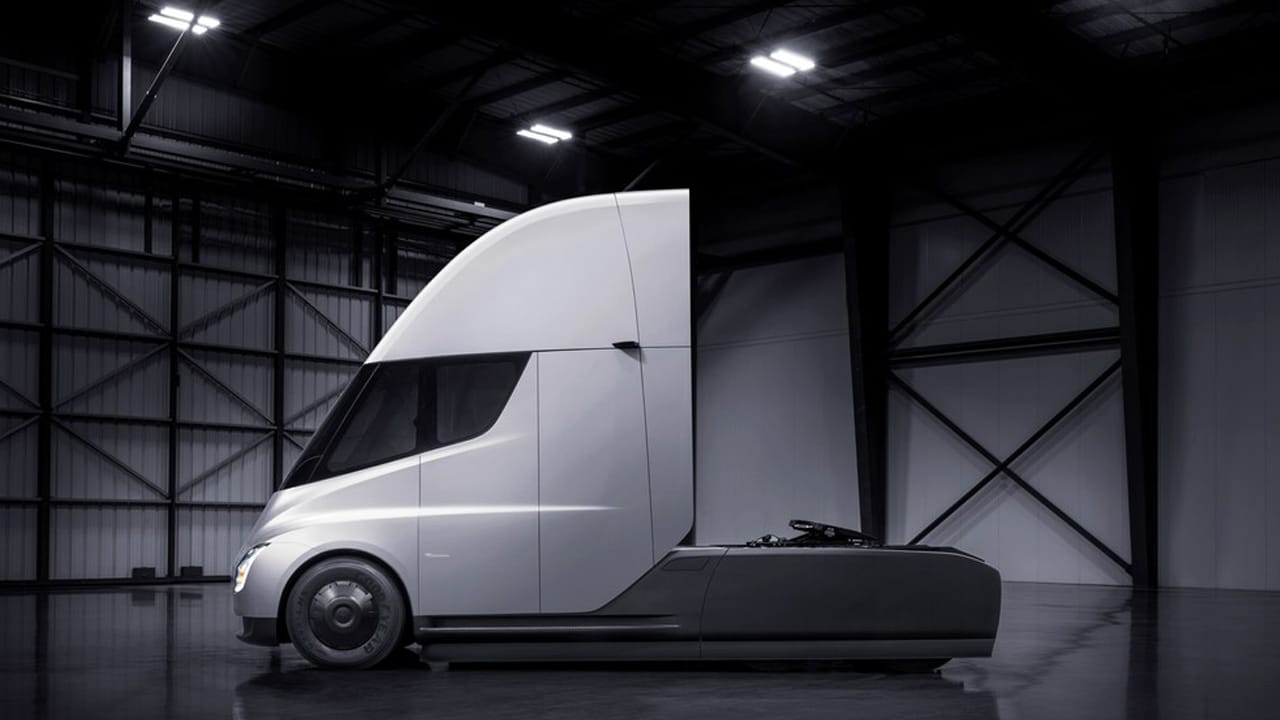 Regardless, the staggering acceleration and power figures for the vehicle, and the fact that it’s running on a massive, electric powertrain, mean that torque must be, for lack of a better word, chunkmungous.

Musk claims that the vehicle can hit 60 mph in 5 seconds when unladen, and that it will hit that same speed in 20 seconds even when fully laden (around 36 tonnes, according to various highway codes in America). The vehicle will also comfortably manage 65 mph (104 kph), where diesel trucks will only hit 45 mph (72 kph) on average.

The range of 500 miles (804 km) was also a surprise, as was the charging rate. Musk claims that the vehicle will give you 400 miles (643 km) of range after 30 minutes of charging via one of Tesla’s new Megachargers. And yes, these are more powerful than the Superchargers for the Tesla cars.

Thirty minutes might seem like a long time, but Musk shares a different perspective on the matter. He points out that topping up a diesel truck takes about 15 minutes anyway, and that drivers will usually need to stop for about 30 minutes when loading and unloading the vehicle. He also points out that 400 miles of range translates to about 6-7 hours of driving, after which a driver must anyway make a mandatory rest stop.

Another interesting observation was that 80 percent of the routes in America involve less than 250 miles (402 km) of travel. The driver can thus travel to the back of beyond and still make his way back. The cab is simultaneously futuristic and minimalistic. Image: Tesla Inc

From the outside, the front of the truck looks vaguely like an inverted boat hull: It’s shaped like a rounded wedge. The rear wheels are encased in a cowl of sorts and massive fins enclose the gap between the cab and the trailer, further improving aerodynamics.

On the safety front, the vehicle is sorted. All trucks will come with Autopilot, which will do things like automatic braking, lane assist and all the other Autopilot features.

Driver comfort is another factor that’s important and judging by the interior, there can’t possibly be much to complain about. The six-and-a-half-foot cab is tall enough for the average person to stand in and the interior layout seats the driver towards the front-centre of the vehicle. A jump-seat is present in the rear. Tesla claims that the design of the cab allows the vehicle to see the point where the truck front meets the road.

The control column is very similar to the Tesla Model 3. It’s a minimalistic design featuring a central driving wheel and two large, 15-inch touchscreens on either side. The touchscreens provide all the information a driver needs and even double as side-view mirrors. In fact, there are no mirrors on the outside of the vehicle. Obviously, the driver need not bother with gears or a clutch.

While it’s perfectly fine for geeks like us to drool over the vehicle, it’s the folk who operate trucks that are eventually going to buy the vehicle. To that end, Tesla claims that the cost of ownership of the truck will be at worst 20 percent less than that of a diesel truck. Better yet, the Semi can operate in convoy mode, trailing other Semis, resulting in a 50 percent saving as compared to a diesel.

The vehicle will enter production by 2019, says Musk.

The second most desirable vehicle?

Ah, yes. The truck revealed today is amazing and exciting and was, for all of 10 minutes, the most desirable vehicle on the planet. It had to relinquish that title, however, to the new Tesla Roadster that rolled out of the back of the truck at the end of the presentation. 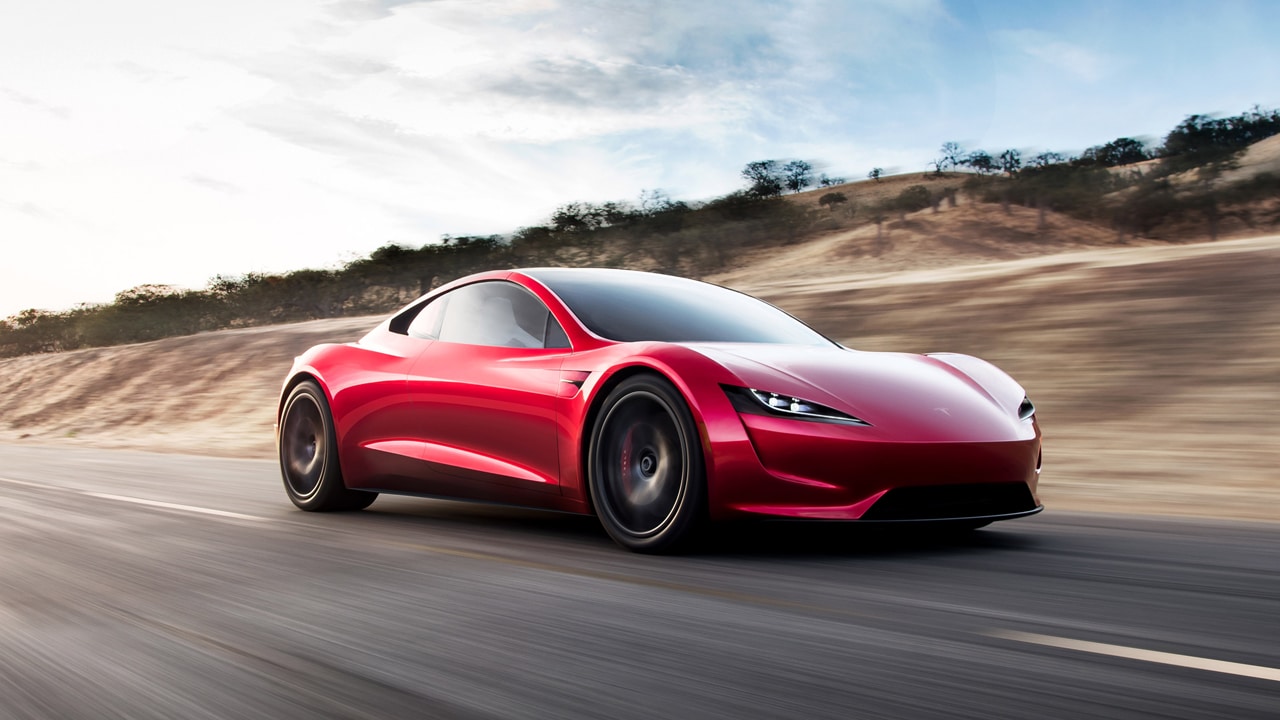 The announcement of the Roadster caught everyone by surprise

An announcement that took everyone by surprise. The Roadster is not ready for production yet but even at this stage, puts every other gasoline-powered car to shame.

It features a 200 kWh battery, a 650 mile range (1,046 km), seating for two adults and two small people (kids, dwarfs, midgets, take your pick). Better yet, the roof comes off and Musk also promises a “capacious” boot. That battery is twice the size of the one in the Model 3.

It’s almost seems like the perfect family car, and Telsa promises that it will be the most powerful production car ever made. And did we mention that it’s designed to hit a top speed of over 250 mph (400+ kph)?

And get this, this superfast Roadster is just the base model.

Lest we forget, Tesla also hinted at an upcoming Tesla Pickup truck, but teased no more than an image.

For more images on Tesla's big-rig Semi truck, head on here. You could also check out more images of the surprising fast Tesla Roadster here.