Elon Musk unveils new plans for BFR, the rocket that will eventually take us to the moon, to Mars and beyond

Elon Musk, at the IAC, delivered a speech in which he outlined in more detail his plan for getting humans to the moon and Mars

Elon Musk, at the International Astronomical Congress, delivered a speech in which he outlined in more detail his plan for getting humans to the moon, Mars and anywhere on Earth in less than 30 minutes. A file photo of Elon Musk

Crucial to this plan is SpaceX’ BFR — Big Falcon/F**king Rocket, depending on your inclination — which is now smaller and lighter than the one Musk described last year. The biggest problem with the BFR, which, while smaller than the original plan, is still more massive than the Saturn V, is that it’s expensive. Last year, Musk had no clear plan on how to fund the project and cracked jokes about Kickstarter campaigns and selling underwear. This year, Musk has a plan.

Musk now intend to replace the Falcon and Dragon programs with BFR, which will now be modular and adaptable to multiple roles. All the resources invested in rockets like the Falcon 9 Heavy and Dragon will be used for BFR, and Musk thinks that the money earned from satellite launch commissions and from servicing the ISS (International Space Station) will  be enough for the program.

In its heaviest configuration, BFR will be capable of carrying a payload of 150 tonnes to low Earth orbit (LEO). The upcoming Falcon Heavy will carry a relatively tiny 34 tonnes to orbit. The BFR will dwarf the Falcon 9 Heavy

BFR will apparently use a Raptor engine, which Musk claims has the highest thrust-to-weight ratio of any engine in the world. Thirty one of these engines will be strapped to the BFR, providing a mind-boggling 5,500 tonnes of thrust. The vehicle will weigh 4,400 tonnes.

So far, the Raptor engines have been test-fired for a total of 1,200 seconds. The maximum length of time for a single test fire has been 100 seconds, which Musk says is a limitation of the fuel tank and not the rocket motor. A 100 seconds might seem low, but as Musk points out, a Mars landing will only require 40 seconds on thrust. 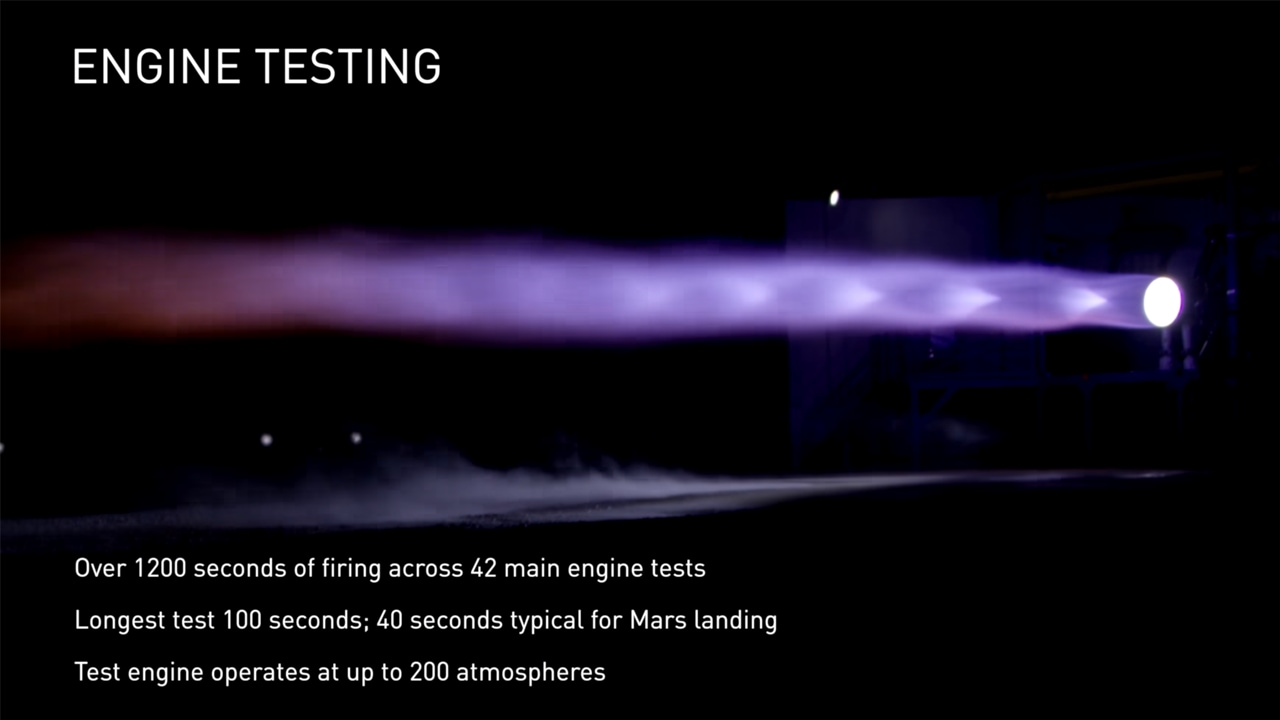 Speaking of engines, Musk points out that currently, SpaceX’ craft return and land with only one engine. There have been 16 successful, back-to-back landings so far. The BFR will be a multi-engine system with a landing reliability on par with that of commercial aircraft, promises Musk.

The new lander will apparently dock directly with the launch mounts, eliminating the need for legs. 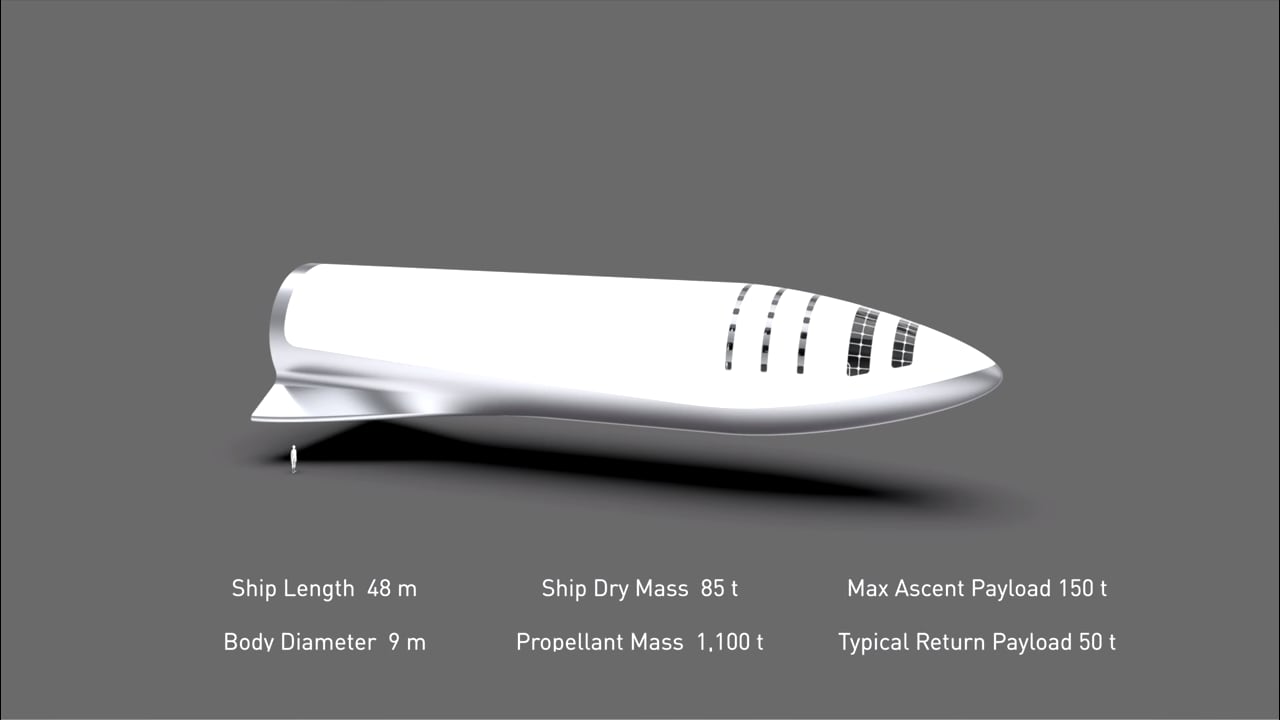 The spacecraft can also accommodate larger satellites, including, say, a telescope with a mirror ten times the diameter of that on the Hubble, says Musk.

The payload module will have a propulsive system of its own consisting of six engines, four of which will operate in vacuum. All the engines are gimballed and can be used to generate directional thrust. Only the two central engines are required for landing, says Musk, and of those two, only one is required to land safely.

One limitation of the BFR, and with heavy rockets in general, is that it can only get to LEO with its 150 tonne payload. To get to the moon or Mars and back will require more fuel.

Musk’s plan is to develop refuelling tankers in space. These tankers will carry the methane-oxygen combo that makes up the fuel of the spacecraft. Crucial to this refuelling process, says Musk, is an automated docking procedure. This process, he says, is already being perfected by Dragon.

The refuelling process is also interesting and Musk describes a process that simply uses inertia to transfer the fuel. The ships will dock, one will thrust in one direction and inertia will transfer the fuel in the opposite direction. To get to the moon and back, only one refuelling stop will be required. To get to Mars and back, however, Musk thinks that fuel must be produced there. Given the presence of water on Mars and the CO2-rich atmosphere, this, he believes, is possible. 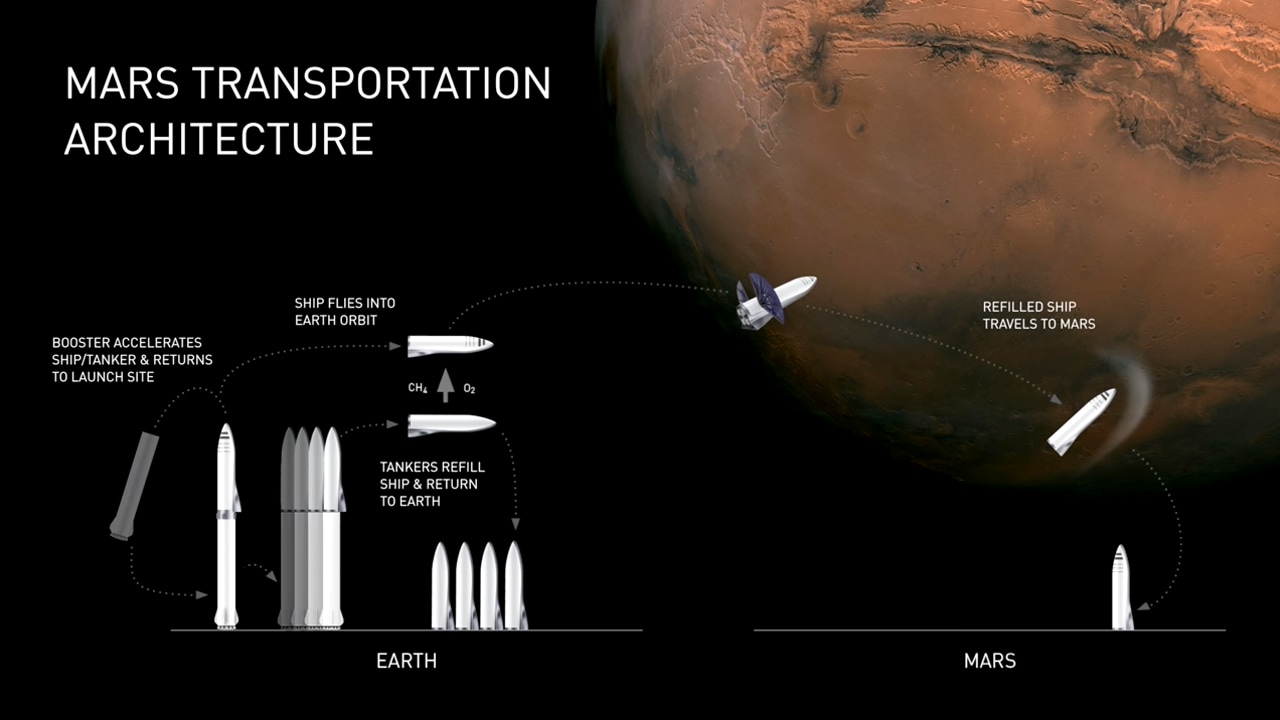 Given that thousands of ships will be required to colonise Mars, a reusable rocket with refuelling capabilities is essential for cutting costs. A lot of fuel will also be required, though Musk thinks that this can be sustainably produced on Earth with solar power. He thinks that solar power can be used to extract CO2 from the atmosphere and to combine it with water to produce the necessary fuel.

Musk hopes to send two missions to Mars by 2022. The first mission, in 2022, will involve two BFRs, which will hunt for raw materials for fuel production. The following mission will occur in 2024, where four BFRs will head to Mars. Two of these will carry crew and the other two will carry resources for setting up a fuel production facility on the red planet.

Surprisingly, Musk says that this humungous BFR will be cheaper to operate than a much smaller spacecraft. Given the massive payload, Musk says the math works out just as it does for larger commercial airliners. A smaller aircraft is more expensive per person than a larger one.

“If the ship can get to Mars, why can’t we use the same on Earth?” asks Musk. The same rocket, he thinks, can be used to connect the globe. He concluded his speech with a video where he shows the rocket — without a massive booster stage — could be used to ferry people to any place on the Earth in less than an hour. The rocket could leave the Earth’s atmosphere, hitting speeds in excess of 27,000 kph (most commercial airlines fly at around 800-900 kph) before re-entry and landing.

With this approach, Musk thinks a Delhi to San Francisco trip would be accomplished in just 40 minutes.

So there you have it, Musk’s updated plan to make humans an interplanetary species and to get anyone to anywhere else on Earth in less than an hour.

You can watch the entire, 43-minute presentation right here, and it's definitely worth a watch.