Tesla Inc upstaged its own debut of an electric heavy duty truck on Thursday when a red Roadster pulled out of the big rig’s trailer and Chief Executive Elon Musk said the new $200,000 sports car would be the fastest production car ever.

The showmanship wowed the crowd although some analysts’ heads started throbbing at the variety of new projects launched as the company is struggling to produce the more affordable sedan upon which its future depends.

As the presentation appeared to end, the Tesla Semi opened its trailer, and the Roadster drove out. The sports car with a removable glass roof is an updated version of Tesla’s first production vehicle. It can seat four and travel 620 miles (1,000 km) on a single charge, a new record for an electric vehicle, Musk said. It can go from 0 to 60 miles per hour (100 km per hour) in 1.9 seconds with a maximum speed over 250 mph, which would make it the fastest car in general production.

”You’ll be able to travel from LA to San Francisco, and back, at highway speed without recharging. The point of doing this is to just give a hardcore smackdown to gasoline cars. Driving a gasoline sports car is going to feel like a steam engine with a side of quiche,” Musk boasted. Musk did not give a price for the Semi, or say how or where either product would be built, but he said the truck would begin production in 2019 and that the Roadster would be available a year later.

Musk has described electric trucks as Tesla’s next effort to move the economy away from fossil fuels through projects including electric cars, solar roofs and power storage.

Some analysts fear the truck will be an expensive distraction for Tesla, which is burning cash, has never posted an annual profit, and is in self-described “manufacturing hell” starting up production of the $35,000 Model 3 sedan.

”The specs on the new semi truck and sports car would put both vehicles at the top of their segments...assuming they can be produced and sold as part of a sustainable business plan. So far that final element has eluded Tesla Motors, which makes it difficult to see these vehicles as more than ‘what if’ concept cars,” he added.

Tesla also has to convince the trucking community that it can build an affordable electric big rig with the range and cargo capacity to compete with relatively low-cost, time-tested diesel trucks. The heavy batteries eat into the weight of cargo an electric truck can haul.

The truck can go up to 500 miles (800 km) at maximum weight at highway speed, Musk said, without giving the size of the payload. Musk said the Class 8 vehicle, the heaviest weight classification for trucks, in 30 minutes can recharge the battery enough to go 400 miles, and that Tesla would build a global, solar-powered network of “megachargers.”

Diesel trucks are capable of traveling up to 1,000 miles (1,600 km) on a single tank of fuel. Musk said diesel trucks were 20 percent more expensive per mile to operate than his electric truck. 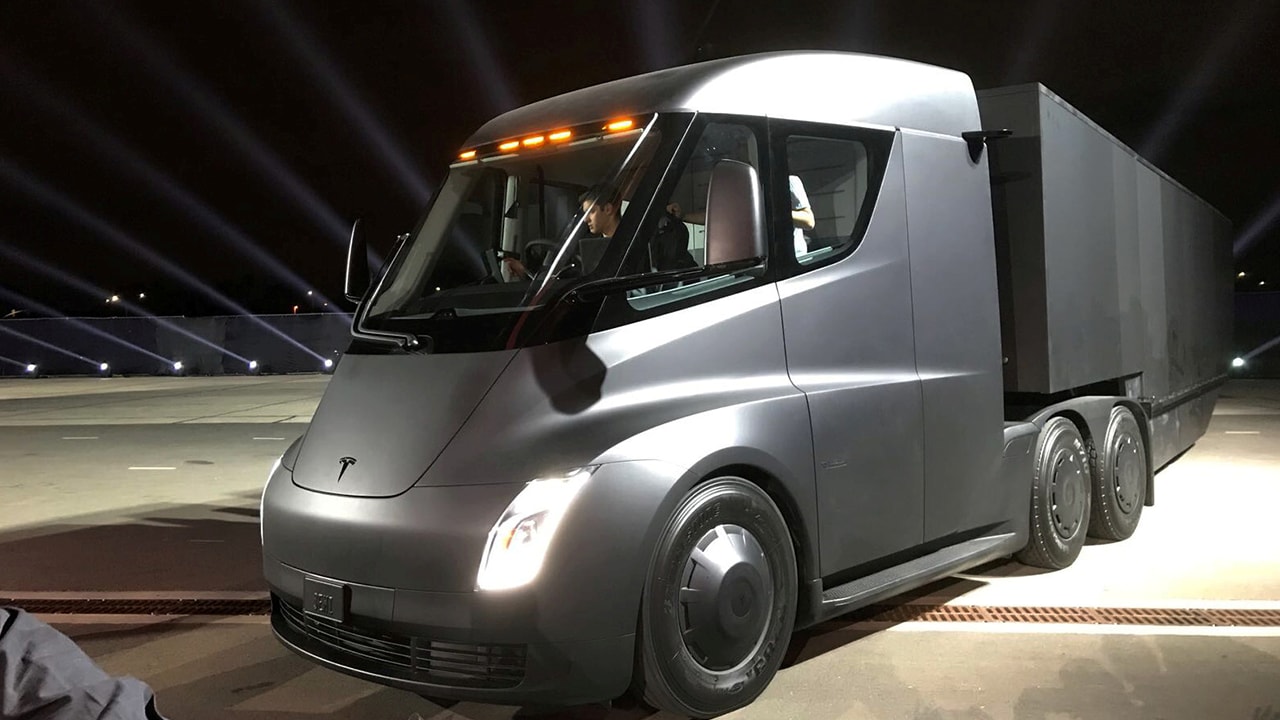 Self-driving technology would allow the trucks to travel in convoys, where only the front truck would need a driver, making trucks cheaper than rail, Musk added.

That vision, however, faces an uncertain regulatory future, since Congress is considering exempting heavy duty trucks from looser self-driving rules in the works, after truckers lobbied that safety and millions of jobs could be at risk.

The day cab - which is not a sleeper - has a less prominent nose than on a classic truck, and the battery is built into the chassis. Tesla designed the cab for good visibility, with a center seat flanked by two touch screens.

Tesla showed off the semi on a webcast which offered reservations for the truck at $5,000 each, but Musk did not discuss reservation volume.

Old Dominion Freight Line Inc, the fourth-largest U.S. less-than-truckload carrier, which consolidates smaller freight loads onto a single truck, said it was not signing on.

“We met with Tesla and at this time we do not see a fit with their product and our fleet,” Dave Bates, senior vice president of operations, said in an email, without elaborating.

Tesla faces a much more crowded field for electric trucks than it did when it introduced its electric cars.

Manufacturers such as Daimler AG, Navistar International Corp and Volkswagen AG are joining a host of start-ups racing to overcome the challenges of substituting batteries for diesel engines as regulators crack down on carbon dioxide and soot pollution.

Still, manufacturers are mostly focused on medium-duty trucks, not the heavy big rig market Tesla is after.

Tesla would need to invest substantially to create a factory for those trucks. The company is currently spending about $1 billion per quarter, largely to set up the Model 3 factory, and is contemplating a factory in China to build cars.

Charging and maintaining electric trucks that crisscross the country could be expensive and complex.

Shares of Tesla have risen 46 percent this year to make the company the No. 2 U.S. automaker by market value.