Matthew MacDougall, a neurosurgeon that works with Neuralink, they were considering implanting the chip in a paralyzed person so that they could type on a computer or form words.

"I think this is going to blow your mind!" says Elon Musk in an hour-long webcast where the billionaire entrepreneur showcased three pig with brain chips in them. The event was supposed to be a product demonstration however, one won't be able to buy any of the products as yet since human trials still need to be conducted.

Last year, in a live-streamed event, Musk had a brown and white rat that had a wire attached to its head and transmitted its thoughts to a computer where one could see and hear the crackle of its neurons. The chip was also tested on a monkey that could control a computer with its brain. Founded in 2016 by Elon Musk along with a team of eight other people the company is based out of San Francisco. The start-up wants to make devices that will be implanted into a person's brain and will be able to treat serious brain diseases like Alzheimer’s, dementia and help paraplegic people. They are also looking into human enhancement where human brains will be able to communicate with computers and fuse humankind with artificial intelligence

During the Livestream, Musk showcased the implant and described it as "a Fitbit in your skull with tiny wires". The chip is 23 millimetres in diameter and according to a report by BBC, Musk said that the original Neuralink device, had been simplified and made smaller.

The Neuralink implants place wires or what they call ‘threads’ into the brain. These threads are extremely flexible and are four to six μm in width which is thinner than a human hair.

According to a report by MIT, the device - which is called a link- is about as thick as the human skull and would 'plop neatly onto the surface of the brain through a drill hole that could then be sealed with superglue.

"It actually fits quite nicely in your skull. It could be under your hair and you wouldn't know," he said.

He hinted that he could have a chip inserted in his head. "I could have a Neuralink right now and you wouldn’t know... Maybe I do."

Neuralink is also developing a machine that will automatically embed these threads into the human brain. These threads will be able to transfer high volumes of data as many as “3,072 electrodes per array distributed across 96 threads,” states a paper credited to Musk and Neuralink.

Musk had a sense of humour on stage when he called on the pigs for a  “three little pigs demo.” From the three pigs, Gertrude is the only pig that currently has an implant. Dorothy had an implant but it was removed and Joyce does not have an implant at all. He said that they were “healthy, happy and indistinguishable from a normal pig.” Gertrude has had her implant for two months and according to a report by Reuters, is in the part of its brain that controls the snout. She needed some coaxing to appear on camera but soon began eating off of a stool and sniffing straw. This triggered spikes on a graph that tracked the animal’s neural activity. 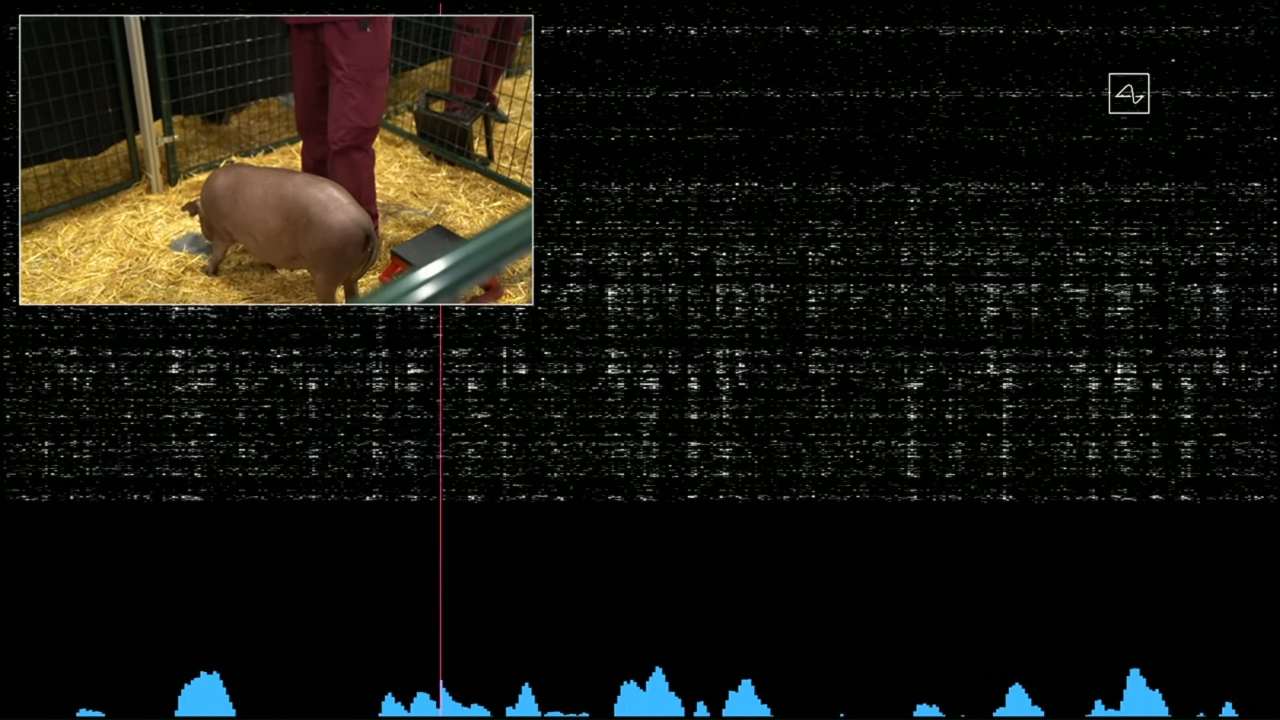 Gertrude the pig and her brain activity. image credit: Neuralink/Youtube

Dorathy the pig is supposed to show reversibility which Musk explained that if someone wanted to remove the link, they should be able to live a healthy, normal life after that as well.

On previous occasion Musk said that human trials would begin by the end of this year however, Musk avoided giving any actual dates or timelines which he could be held to.

Matthew MacDougall, a neurosurgeon that works with the company, was cautious when he said that Neuralink was considering implanting the chip in a paralyzed person so that they could type on a computer or form words. Musk was a lot more optimistic and went a step further when he said, “I think long-term you can restore someone full-body motion (with the chip)."