Tesla Model 3 has quicker and better handling than BMW M3. Elon Musk also mentioned that the new car will beat anything in its call on the track.

US-based electric vehicle company Tesla's CEO Elon Musk has announced the specifications of an upcoming variant of its electric car, the Model 3. The electric car was unveiled by the CEO in April 2016. The company ramped up the production of the new car by producing 6,000 cars per week by the end of the June 2018. Tesla is also expected to be profitable in third and fourth quarters of 2018. 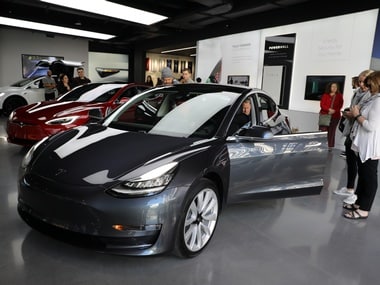 Elon Musk tweeted the specification of the all-wheel drive (AWD) Model 3 which will comes with two motors, all-wheel drive and a top speed of 155 mph. The electric car can go from 0-60 mph in 3.5 seconds and comes with a range of 310 miles. Musk also announced the performance package of the Model 3 that will be priced at $78,000, which includes cost of all options, wheel, paints etc. The cost of Autopilot has has not been included in this package.

The Model 3 is priced same as the BMW M3 but will come with quicker and better handling said Musk in his tweets. Elon Musk also mentioned that the new car will beat anything in its class on the track.

Cost of all options, wheels, paint, etc is included (apart from Autopilot). Cost is $78k. About same as BMW M3, but 15% quicker & with better handling. Will beat anything in its class on the track.

It AWD variant comes with two motors, so even if one of the motors break down, the car can run with the help of the other motor. Two of the motors have been placed on the front and rear side of the car. According to Musk, one of the motors has been optimised for power and the other one for range. The previous version of the Model 3 had no AWD option.

Tesla dual motor means there is a motor in front & a motor in rear. One is optimized for power & one for range. Car drives fine even if a motor breaks down. Helps ensure you make it to your destination & don’t get stuck on side of road in potentially unsafe conditions. — Elon Musk (@elonmusk) May 20, 2018

The cost upgrading single rear motor to a dual-motor AWD is $5,000 as per the tweet. Musk said that the standard model (or with the upgrade) can reach 60 mph in 4.5 seconds and comes with a top speed of 140 mph. Tesla fans must be waiting for the new Tesla Model 3, so let's see how it impacts the choice of customers. The CEO, earlier also tweeted saying that the "Driving Feels Amazing" explaining the performance of the new package.