The Telecom Commission in its recent meeting has approved a comprehensive strategy to implement BharatNet in the northeast region, said Manoj Sinha.

The government on Tuesday said it will invest Rs 10,743 crore for improving the telecommunication network in the northeastern states and along the National Highways in the region. 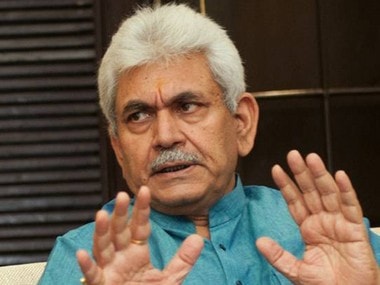 Union Minister of State for Telecommunications Manoj Sinha announced this while he was in Guwahati to review the implementation of BharatNet and other major telecom projects in the northeastern region.

"An amount of Rs 10,743 crore will be spent on different projects in the northeastern states to spread mobile network connectivity to different uncovered villages in the region. I hope that most of these projects will be completed by December 2018," said Sinha.

He further said that under comprehensive telecom development project for NER, 6,673 towers are to be set up to provide connectivity to 8,621 villages and along the National Highways at a cost of Rs 5,336 crore.

"An MoU was signed between the BSNL and USO fund to set up 2,817 mobile towers by BSNL in Arunachal Pradesh and two districts of Assam -- Karbi Anglong and Dima Hasao -- while the work of setting up of 2,004 towers in six other states has been initiated by Bharti Airtel in December 2017, which is to be completed in 18 months time," he said.

Sinha further said that the department of telecommunications also plans to establish a robust telecom network in bordering areas of the state.

"However, first there has to be mobile network and we are working on to make the mobile network available. I hope completion of these projects would lead to improved connectivity in the region," he said.

The minister also dedicated the Asthamangal project implemented by the BSNL to the nation and especially to the citizens of the northeast region.

Under the project, alternate bandwidth of 810 Gbps at a cost of about Rs 35 crore has been provided by the BSNL using reliable connectivity through optical power ground fibre (OPGW) of Power Grid Corporation of India (PGCIL) for all state headquarters and important locations in the northeast region.