Donald Trump to use Twitter in China despite the Great Firewall

Trump could also use an alternative temporary phone as another way to avoid the risk of compromising his smartphone in a country which is often accused of hacking.

US President Donald Trump has tweeted energetically throughout his Asian tour so far, but in China he will likely be one of a select few to skirt the country's ban on his cherished website. 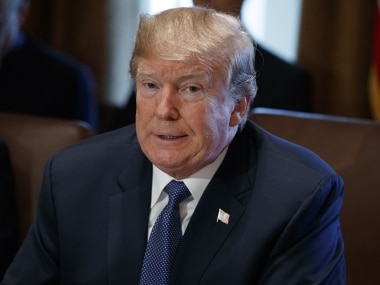 The Twitter-happy president has fired off a slew of posts, on both domestic and international issues, since he started his trip in Japan and moved on to South Korea on Tuesday.

But when he lands in China on 9 November, Trump will enter the so-called "Great Firewall" of online censorship that monitors people's internet habits and blocks websites such as Twitter, Facebook and Google.

Asked whether Trump, who will get red-carpet treatment during his state visit, would be able to tweet, Chinese vice foreign minister Zheng Zeguang told reporters: "How President Trump communicates with the outside is not something you need to worry about."

Trump, who has used an iPhone for Twitter posts, could use some options available to people in China to evade the Great Firewall, though US presidents in any case travel with their own sophisticated communications systems.

Web users can circumvent the firewall if they download a virtual private network (VPN) software that allows people to surf the internet as if they were using a server in another country.

But Beijing mandated in January that all developers must obtain government licences to offer VPN software, raising concern it might ban them outright.

Foreign visitors can also access banned websites with their phones if they are in roaming mode but only because the authorities currently allow it, according to experts.

Trump should be able to use roaming "but it depends on the policy of the (Chinese) government. If they chose not to allow you to (use roaming) then they can do it," James Gong, a Chinese cyber law expert at Herbert Smith Freehills law firm, told AFP.

"But if you're the president you should be able to do it. Donald Trump cannot live without Twitter," Gong said.

Mobile devices on roaming in China still use the local telecom service infrastructure, which raises privacy and security questions.

Charlie Smith, co-founder of the anti-censorship group Greatfire.org, said phones using data or virtual private networks (VPNs) are "generally" safe from hacking but it depends on the phone, user settings and other factors.

"As you know, every day in China, almost all mobile phone use is monitored and tens of thousands of people are under close watch," he told AFP.

"US officials should be well trained and prepared for travelling overseas and for maintaining secure communications, as the Chinese leadership are when they travel overseas."

Trump could also use an alternative temporary phone as another way to avoid the risk of compromising his smartphone in a country which is often accused of hacking.

While Trump will likely find ways around the firewall, Chinese people face increasingly stringent controls over what they can do, say and see on the internet.

Chinese internet users face three years in prison for writing defamatory messages that are re-posted 500 times under a law passed in 2013. Web users can be jailed if offending posts are viewed more than 5,000 times.

New rules policing content were imposed this year and several of the country's biggest tech firms were fined for failing to remove illegal online content such as pornography and violence.

China has its own version of Twitter, Weibo, which boasts more than 300 million monthly active users.

But people must be wary of what they write.

Last year, a man who wrote a Weibo post critical of China's decades-old land reform policies on a local traffic police account was sentenced to a year in prison, reports said.

Another man, Qiao Mu, a former professor of international political communications in Beijing, recently moved to the United States after being targeted for his social media commentary.

He said authorities closed over 100 of his Weibo accounts and 17 of his accounts on the WeChat messaging service.

"There is no place for me to publish inside China's firewall," Qiao told AFP, explaining that he had tried to start new accounts after each was shut down.

Coronavirus Outbreak: Donald Trump says his administration will look into freezing US funding for 'China-centric' WHO