Whether you want a cheap communication device or a standby phone, here are the best options to pick from this festival season.

Apart from the affordability, there are still a number of reasons to use a feature phone. The long battery life, usability for the elderly and visually challenged, small form factor, light weight and a digital detox are some of the advantages offered by feature phones. Feature phones do not need regular software updates, and do not get outdated within one, two or three years of release, these basic phones can be used for years. In the list, you will find a fidget spinner, a phone with a 5,000 mAh battery, and a device that has a front facing camera with a flash. None of these support WhatsApp though. Whether you want a cheap communication device or a standby phone, here are the best options to pick from this Diwali.

The I Kall K88 is among the cheapest feature phones available in the market right now, and at the same time it does not disappoint in the looks department. The phone has a 0.3 MP rear camera which can record videos, a 1.8-inch TFT display as well as a torch. This is a dual SIM device. In terms of storage, the phone has 32 MB of RAM, and 64 MB of on board storage. Up to 8 GB of expandable storage is supported. There is an FM chip on the device, and it supports Bluetooth connectivity, along with a 1,000 mAh battery. One disadvantage is that the phone does not vibrate, so you will have to rely on the caller tune. The I Kall K88 is available in blue and red colours, and is available for Rs 489. 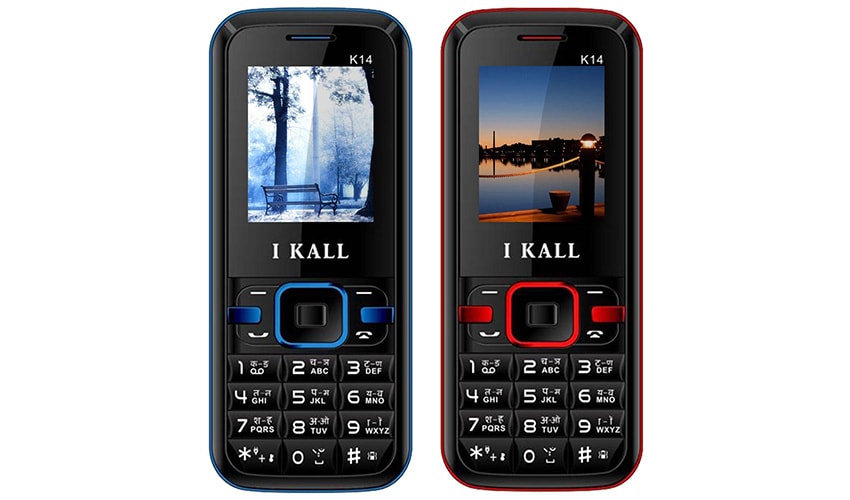 The Chilli K188 is a very basic phone, but the best thing about it is that it also a fidget spinner. This is the world's first fidget spinner phone, made by the Hong Kong based company, Chilli International Holding. The phone has a rather small 1-inch TFT display, and has no camera or 3.5 mm jack. The phone has 32 MB RAM and 32 MB ROM with expandable storage up to 8 MB supported through a microSD card slot. The phone offers Bluetooth and a 5 pin USB slot for connectivity purposes. The phone supports only a 2G micro SIM and has a rather limited 280 mAh battery. The phone is available in a number of colours including blue, red, gold, black and rose gold. The Chili K188 is priced at Rs 1,099, and is currently sold out on Amazon. Among the many, many Nokia 3310 clones in the market, the Micromax X1i-Power is reminiscent of the original device, and the black and gold version looks stylish as well. The best thing about the device is the dedicated torch button, along with a front-facing torch, a feature missing in the actual Nokia 3310 2017 edition. The phone supports 21 regional Indian languages. This is a dual SIM phone, with 32 MB of on board storage expandable up to 8 GB, a 2.4-inch TFT screen, and powered by a 1,300 mAh battery. The phone has a 0.3 MP main camera, and sports a front camera as well. The Micromax website does not list the specification of the front camera, or actually any specifications at all. The Micromax X1i-Power is available in black, blue, grey and red, and is priced at Rs 1,049. Samsung Guru Music 2 is one of the best devices in the Guru lineup of feature phones. It features a 2-inch display, dual SIM card slots, an 800 mAh battery and an FM radio chip. As the name indicates, this is a music oriented phone with a dedicated play/pause button on the direction pad. The vibrant screen has a colour depth of 65K. The storage can be expanded up to 16 GB. The Samsung Guru Music 2 is available in black, white and blue and is priced at Rs 1,899. 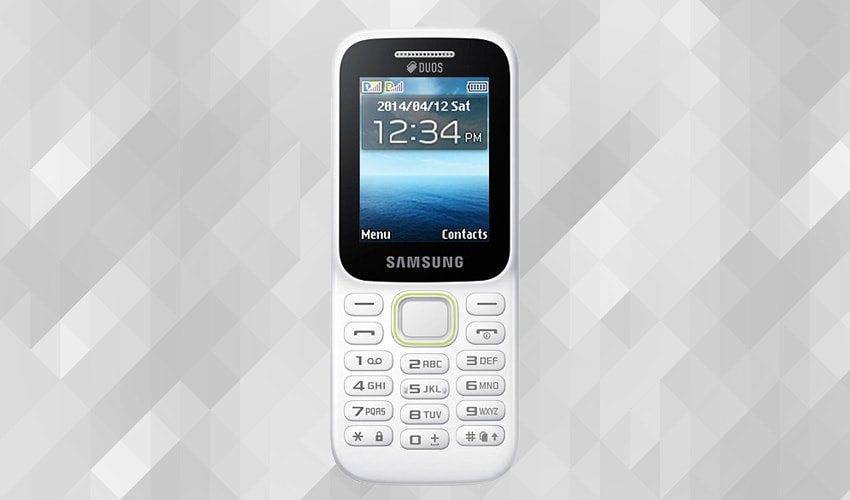 This is probably the most coveted feature phone in the market right now, with cloned designs available from a number of manufacturers including major players such as Micromax and Intex. This phone is pure nostalgia, and the build quality is pretty good as well. In terms of specifications, there is a large-ish 2.4-inch TFT display, is powered by a 1,200 mAh battery and comes with a radio. Snake on the 3310 is perhaps the most original game from Gameloft ever. 16 MB of internal memory that can be expanded up to 32 GB, The Nokia 3310 currently in the market does not support 3G, but there is a 3G version of the 3310 coming soon. The Nokia 3310 is available in orange, yellow, grey and blue and priced at Rs 3,599, if you can find it. 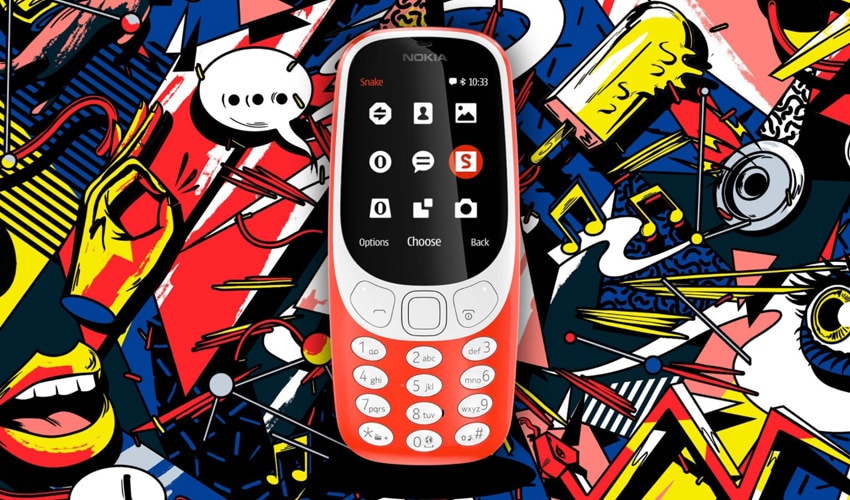 The main benefit of the Samsung Metro XL is the large (for a feature phone) TFT screen measuring 2.8 inches. This is a multimedia oriented feature phone with 64 MB of RAM, with expandable storage up to 16 GB supported. There is a 3.1 MP main camera and a 2.0 MP front camera. The front camera takes up to 9 shots in continuous mode, which is similar to a burst mode. This means that users can pick and choose the best selfie. There is an FM chip on board, and a browser for surfing the web. The battery capacity of the device is 1,200 mAh. The Samsung Metro XL is available in black and white, and is priced at Rs 3,190. The Nokia 150 is a dual sim feature phone with a polycarbonate shell that retains its colour even when scratched. It features a 2.4-inch TFT display with along with a 1,020 mAh battery that offers 25 days of standby time. It also features FM radio, an MP3 Player along with Snake Xenzia and Nitro racing. Connectivity options include Bluetooth and USB. The feature phone also packs in a VGA camera and an LED flash. This is a fresh new design by Nokia, and a feature phone made for current times. The Nokia 150 is available in black and white, and is priced at RS 2,059. 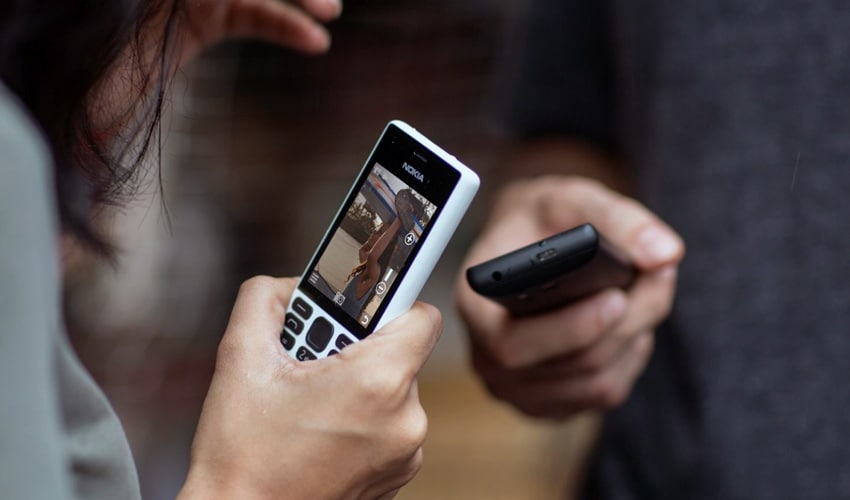 The Karbonn Mahaabali is the perfect trekking and travel companion. It has a rugged design that can take a bit of abuse, four LED torches on the front, and a massive 5,000 mAh battery, which is its best feature. The back of the device is secured by two massive rivets, which adds to the rugged look and feel. The device has a 1.8-inch TFT display, has dual SIM support and the memory can be expanded to 32 GB. There is also a 1.3 MP camera on board. In all, the specifications are on the higher side considering the price point. Connectivity options include USB and Bluetooth. The Mahaabali is available in black, grey and olive colours, and is priced at Rs 1,415. If you are attracted to the device because it brings to mind a certain epic movie, Karbonn actually has a device named Baahubali, but with a 4,000 mAh battery. The Nokia 105 is a real looker, has a tough polycarbonate shell, with a raised and spaced keypad for easy texting. The screen is a 1.8 inch QQVGA display. The device is available in single SIM and dual SIM variants. The OS on the device is the Nokia Series 30+ and it comes pre-loaded with a Snake variant known as Snake Xenzia. This is a no-frills device, with no Bluetooth or Wifi, and 4GB of ROM, along with 4GB of RAM. The battery capacity is rather modest at 800 mAh. According to us this is the best feature phone in the market right now, as it is durable, has a torch on the top, has the brand name going for it, and is affordably priced as well. The Nokia 105 is available in white, black and blue, and is priced at Rs 1,149. The JioPhone is a hefty device with features found only in smartphones. There is a digital voice assistant that is currently available in Hindi and English, and you can just ask the phone to send a message, place a call, play a song, or listen to a particular track. The screen is a 2.4 inch TFT display, with 512 MB of on board RAM, as well as 4 GB of physical memory. The microSD slot supports expandable storage up to 128 GB. 22 Indian languages are supported in the interface of the phone. The phone ships with the entire Jio suite of applications, including JioTV which allows users to watch a number of TV channels through the phone itself. The JioPhone is available for a deposit of Rs 1,500 which can be refunded after three years of use, on returning the device. 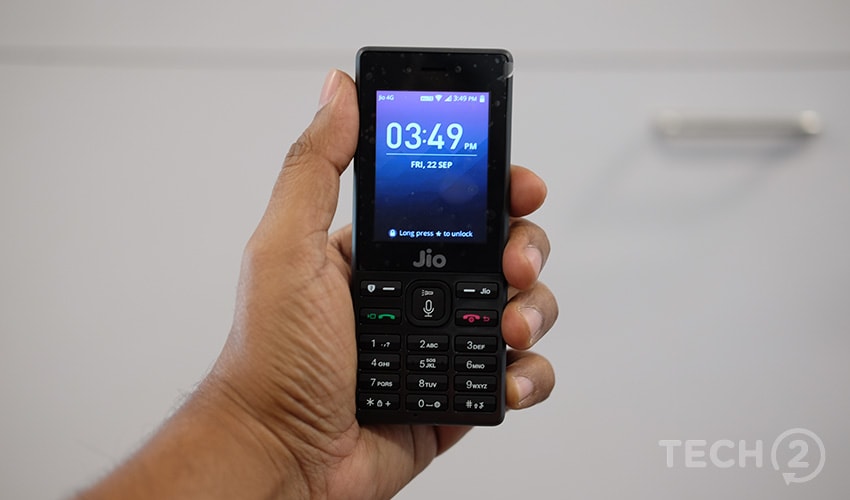