The Indian media are at a tipping point, hobbled by suspect financing, a history of servility, and a massive loss of public trust. The internet is no silver bullet, but it most certainly represents a lifeline.

"In 1791, American legislators had written, in their historic first amendment, 'Congress shall make no law ... abridging the freedom of speech, or of the press.' Our first amendment said exactly the opposite: nothing in the future shall 'prevent the State from making any law' that takes away the freedom of press," Caravan Executive Editor Vinod Jose in a brilliant, must-read essay mapping the 'habits of mind' that have crippled the Indian media. [You can read it in its entirety on the Caravan website]

Stepping away from the shallow allegations of 'paid media', and above the usual hand-wringing rhetoric peddled by the likes of Vinod Mehta, Jose takes a bird's eye view of the evolution of the Indian press to answer the thorny questions that preoccupy us all: "Why is our journalism so pliable? What gives external forces the temerity to shape the media to their own ends? What is it in our democratic culture that makes the media subordinate itself to the legislature, executive, judiciary and corporations-making it susceptible to inappropriate influence?"

A brief history of servility

For Jose, the smoking gun is the the First Amendment Act (1951) which was passed 15 months after the constitution was adopted, pushed through by our founding fathers, Jawaharlal Nehru, BR Ambedkar and Sardar Patel. The last infamously telling Free Press Journal's founding editor, S Sadanand, "We are interested in newspapers which will support us wholeheartedly. To say you will support us when we are right is meaningless. For why should anyone oppose us then?" (Full disclosure: Sadanand was my grandfather).

The first impulse to an independent and free press -- with a naturally adversarial relationship with the state -- was initially squelched in the name of nation-building, and later by flat diktat in the Indira Gandhi era. If the socialist era fostered an institutional mindset of fear', teaching journalists the skills of self-censorship and subservience, 20 years of liberalisation have done little to reverse the damage. 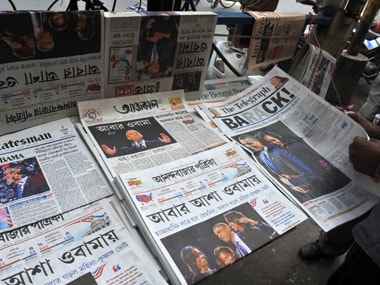 "From nation building, we went to work again as masons on India Inc building," writes Jose. While politicians have become easy targets to interrogate and pillory on nighttime shows, big companies and their leaders have emerged as the new 'untouchables' who could hit publications where it hurt most: their bottom-line. Media outlets often become weapons in the arsenal of a business house, serving primarily to wield political pressure to serve other interests. In this 'free market' model, content is driven solely by profit, though for the owners, and not necessarily for the outlet itself.

In this 60-year vacillation between a 'totalitarian' and 'libertarian' media, we have lost any semblance of the notion of journalism as a public good. Jose ends with a call for the creation of a social responsibility model, which would first aim to change portions of the infamous First Amendment; and build public dialogue and pressure around media conduct and ethics -- creating structural changes which "may begin to show only 15, 20, 30 or more years from now."

The medium is the antidote

There is little to disagree with here, either in terms of Jose's diagnosis or prescription. But Jose omits one other possible antidote to our disease, i.e. the advent of digital journalism. The medium reshapes not just the message but also the messenger. The very nature of the internet makes difficult, if not impossible, the chronic bad habits of the Indian media. It may not cure us entirely, but it deters our worst impulses of servility and self-censorship, and here is why: In the online world, traffic is God.

The clout of a print publication in India is determined by distribution. Whether you buy the Hindustan Times or the Times of India, for example, depends on availability in your local market. Better the distribution, bigger the numbers, and hence greater the advertising revenue, political clout etc. And once a reader buys a newspaper or magazine, what he/she actually reads in it becomes irrelevant.

Online distribution, however, is viral, driven entirely by reader interest. Every media outlet -- big or small, national or local -- is equally available online. There is no way to restrict competition, and therefore no artificially engineered mano-a-mano face-off, as in Chennai, between the Hindu and TOI. Online influence is determined by the ability to churn out relevant, timely and engaging 24X7 content, day after day after day.

When traffic is god, certain standard Indian media practices become unviable.Taking a specific editorial, political, or party line to the exclusion of others is a luxury available only for smaller niche sites a la Niti Central or Kafila. Any national news site aiming for big numbers must necessarily cast a wide net, and reflect a diversity of opinion, or risk hemorrhaging traffic. Nothing kills the general reader's interest faster than predictability.

The internet also rewards unfettered, bold opinion (for better and worse). Self-censorship of a major news story -- be it a Snoopgate or Radiagate -- will render an online news outlet quickly irrelevant. And I can think of at least a half-dozen big-name newspaper columnists who would hardly be read if they existed solely online -- and didn't come bundled into the morning newspaper. Their brand of predictable, risk-averse writing would find no takers in an audience that often doesn't have the patience to read beyond the headline. More importantly, their lack of popularity would be writ large in their individual column numbers -- and therefore difficult for even the friendliest editor to ignore.

The bottom-line is that it is a lot harder for any owner use an online media outlet to push a specific party line, if only because such a move would inevitably inhibit the reach and popularity of the site and its brand. In the online world of news, an influential site can be niche in focus -- say fashion or media criticism or business -- but it cannot afford to be niche in its worldview.

Democracy of the digital newsroom

In his conclusion, Jose also expresses the hope that a new media culture built around social responsibility "would empower young people getting inducted into the system-hopefully from increasingly diverse backgrounds-to question their higher-ups." Now, the digital newsroom may not entirely dismantle old hierarchies within organisations, but it does significantly weaken them.

Again, the primary reason is the very medium itself. Online media's greatest weakness is the need for immediacy which often results in the publication of unverified information. But it is also a strength when we see its impact on old school newsroom hierarchies. There is no time or space to accommodate the traditional, all-powerful editor who exercises iron-clad control over every published word. The sheer pace of the online news cycle requires reposing greater freedom and trust in editors, reporters, and desk producers who produce content. Yes, more mistakes are made, but they can -- and are -- quickly corrected, for unlike print media, online news culture encourages the speedy correction of errors.

And while editorial judgement is always important, it is not all-powerful in an online news site. Any editor must necessarily accommodate the opinions of the resident guru of traffic, i.e. the executive news producer. Content in an online news site is driven as much by the vagaries of google search algorithms and twitter trends as the preferences of the man or woman at the top.

One of the great weapons of tyranny in a print outlet is the byline. The opportunity to write is a boon bestowed on minions by powerful editors, who also determine its placement in the great order of things, be it page 3 or page 17. In an online news site, however, writing is a requirement not a perk. Everyone has to do it, to some extent or the other. And a smart, timely piece written by a desk rookie -- with the potential to go viral -- will get more play than a not-so-exciting op-ed of a senior editor.

Many an editorial ego has been squelched underfoot by the beast of internet traffic. The interactivity of comment boards and social media are just the most visible effect of a new regime that places the reader at the head of the digital newsroom.

Digital is better, but not best

None of this is to say that digital journalism will miraculously inculcate a sorely absent sense of social responsibility in the Indian media. Or that the philosophical intervention that Jose advocates is not necessary. Online news brings with it a separate set of issues about editorial responsibility and due diligence. The impetus to get it up can often overtake the need to get it right.

The online news culture, however, represents a significant improvement on the current faux-libertarian model. And while regional media may remain immune for some time yet, English-language outlets will soon face a time of reckoning. As their audience turns increasingly to digital news -- and new standalone online news sites emerge as competition -- print publications will find it increasingly difficult to do journalism as usual. And so will news channels if people increasingly prefer to check their mobiles than turn on the TV. To rely on brand recognition to peddle more of the same, except in an online avatar, will no longer be an option.

But for digital journalism to be truly revolutionary, it must also usher in a new model of financing so news outlets are no longer reliant on deep pockets of corporate houses. The money is out there -- in the hands of individuals, subscribers, advertisers and venture capitalists -- but only few are willing to put it on the table as yet.

The Indian media are at a tipping point, caught between changing technologies, a crumbling financial model and a massive loss of public trust. The internet is no silver bullet, but it most certainly represents a lifeline.

PS: Yes, I am one of the founding senior editors of Firstpost, and am hugely invested in its success, and that of digital journalism. But just because I am biased, it doesn't mean I am wrong.