Dennis Ritchie's demise last week was overshadowed by the death of Steve Jobs, who, as The Economist had it, was a 'magician'. In more ways than one, though, their careers were intertwined, and were mirror images of each other. For, just as Jobs created the most amazing computer hardware, Ritchie and his colleague, Ken Thompson at Bell Labs, created arguably the most amazing software ever made.

In fact, Jobs depended greatly on the software, Unix, that is Thompson and Ritchie's lasting legacy.

There is a striking similarity in the principles that both Jobs and Thompson/Ritchie espoused: and that is, simplicity and design elegance. Even though Apple has created the most elegant hardware ever imagined by anybody, it would be nothing were it not for the software that powers it - and Jobs would be the first person to admit it: he was jealously possessive of Apple's crown jewel, its operating system, which he refused to license to anybody else. 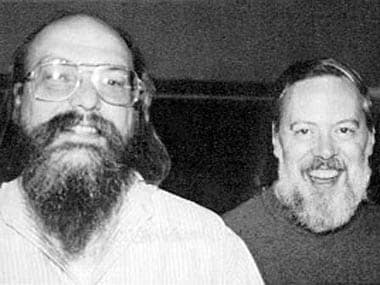 Unix creators Ken Thompson (left) and Dennis Ritchie (right) from the latest edition of the Jargon File. Via Wikimedia Commons

What Thompson and Ritchie built was nothing less than the equivalent of the printing press. Just as Gutenberg brought books down from a pedestal where only the rich and the learned could possess them, Thompson and Ritchie made software accessible to mere mortals. Before them, system software was written by large groups numbering thousands of experts cloistered in a large corporation, toiling away for years to build, for instance, the software that ran IBM's mainframes.

With the invention of Unix software (and the language C that it was written in), Thompson and Ritchie completely overturned that paradigm. Unix was written by just the two of them - two admittedly really smart people - who had access to a small minicomputer that was available in their lab. It was not a giant mainframe that lived in its own building, that was approached with hushed reverence. No more were your punched cards taken away by acolytes, who would later return with the printout, given to you with proper oracular gravity.

Instead, these two bearded guys produced an operating system of such elegance and beauty that its descendants are on the verge of taking over the entire computing world. For example, the software that powers the world of smartphones and tablets (Apple's iOS and Google's Android) - and makes a strong stab at the world of business computing via Linux -is all derived from Unix.

The remarkable principle that Unix follows is the very essence of simplicity: it is made up of a modular set of building blocks (think Lego) that can be combined in arbitrarily complex ways. Each module provides a simple service (for example, sorting a list of numbers), and that is a robust, guaranteed service.

The beauty of this concept is that the modules can be independently developed and maintained - thus leading to the possibility of widespread collaboration. Much later, this led to the concept of the open software movement, and to Eric Raymond's epic essay, wherein he predicted that the 'bazaar' - a loose collection of software people around the world - would overcome the 'cathedral' - the traditional experts inside a company who heretofore had monopolised software development.

Unix was an immediate hit. The issue of the Bell System Technical Journal that describes Unix is still considered a collectible classic: as a Bell Labs employee later, I am fortunate enough to possess a copy.

Unix was first introduced to universities in the 1970s and was an immediate success. Because it was transparent and easy to understand, and the code was provided, generously, by Bell Labs - unlike the tendency in most commercial entities to jealously guard the code as the crown jewels of the organisation.

The Unix code was immediately accessible to readers both because it was written in modular, bite-size pieces, and because the language C that Ritchie invented was easy for humans to comprehend. The combination was a striking success. Generations of college students have grown up on the simple but powerful elegance of Unix.

But Bell Labs was never able to monetise this remarkable invention. Its parent AT&T made some attempts to do so by collaborating with Sun Microsystems and others, but it simply did not have the commercial wherewithal to make a business out of it.

Just as Bell Labs did not make money off its other remarkable inventions, such as the transistor, the laser, and the charge-coupled device, the profits from Unix were also non-existent.

That is where Ritchie and Thompson differed from Jobs: they weren't able to appropriate the tremendous value of their invention, unlike Jobs who parlayed his minimalist hardware design into giant profits and one of the planet's best brands. 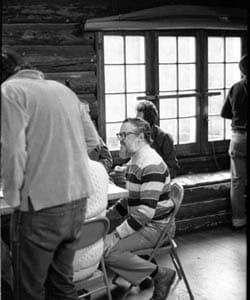 But then, it is likely that Ritchie and Thompson did not care - for they were the very picture of the scientist/technologist. I remember watching them, awestruck, in the Bell Labs cafetaria in Murray Hill, New Jersey - I felt privileged to be in the same room as these geniuses.

Later Unix spawned Linux + GNU, which is a rewrite with no code that is proprietary to any company; and this created the open source movement. And, eventually Apple iOS and Android. Apple's current software comes from NeXT, Jobs' company, which was attempting to create an advanced rewrite of Unix. Thus Jobs, in a very real sense, stood on the shoulders of giants like Thompson and Ritchie.

There was an era when Bell Labs was practically a national resource: such was its impact on the computing and telecommunications world. But just like Xerox's famed Palo Alto Research Center, which invented pretty much all of the user interface of the PC, and laser printing, and local area networking, Bell Labs too never made any money off its inventions.

Now that Ritchie has gone to that Great White Operating System in the Sky, his code and his principles will remain. An entire generation of computer scientists has grown up on a diet that included his signature C language greeting: "Hello, World". We now have to say, reluctantly, "Goodbye, Dennis". And godspeed. You were a mensch.

Rajeev Srinivasan is a management consultant and columnist, but still remains true to his roots in computer science.