#DeleteFacebook: How to go about deleting or deactivating your Facebook profile

Facebook allows you to download and backup your data in case you want to leave the social network and sever all ties.

Unless you have been living under a rock you would know by now that Facebook is under severe scrutiny because of the way a data firm called Cambridge Analytica has been misusing user data from the social network.

Over the past two days, sting operations by news channels and various reports online have pointed out how data from Facebook user profiles (around 50 million) had conveniently been used during Trumps’ 2016 campaign for the US presidency and even in part for the Brexit Leave campaign among many others.

While the investigations have begun over whether the data really influenced the above campaigns, reports by news publications, like The Guardian and in an interview with former Cambridge Analytica research lead Christopher Wylie have revealed a scary picture about how your Facebook data has and can be used against you.

Facebook user profile data refers to anything that you have uploaded, posted or even been tagged in so far. All of these actions on Facebook, do give the social network an idea of who you are, where you are located, and other details which are then fed to advertisers to show you targetted ads. While this sounds fair (because Facebook is letting you use a free social network in return), sharing and storing such data isn’t because it can be then sold to a third-party buyer who can use this massive data-set (we are talking millions of profiles here) to profile users under demographic indicators to be used as targets for darker campaigns, such as the ones revealed by the above news outlets in the case of Cambridge Analytica. Think of it as political advertising which does not have any sort of disclaimers or which does not state that it is a political ad.

And the news just keeps pouring in. From ex-Facebook insiders hinting that the data harvesting practices were routine, to WhatsApp co-founder Brian Acton jumping on to the #deleteFacebook hashtag there are plenty of indicators hinting that Facebook isn’t doing the right thing by neglecting what third-party players do with user data.

More importantly, as per the Channel 4 News, Wylie pointed out how none of Facebook’s users even had the closest hint about how their user data was being misused.

So if you are worried about sharing your Facebook data to both Facebook and third parties, there are right about three ways to go about from stopping Facebook from using your data for whatever purposes. 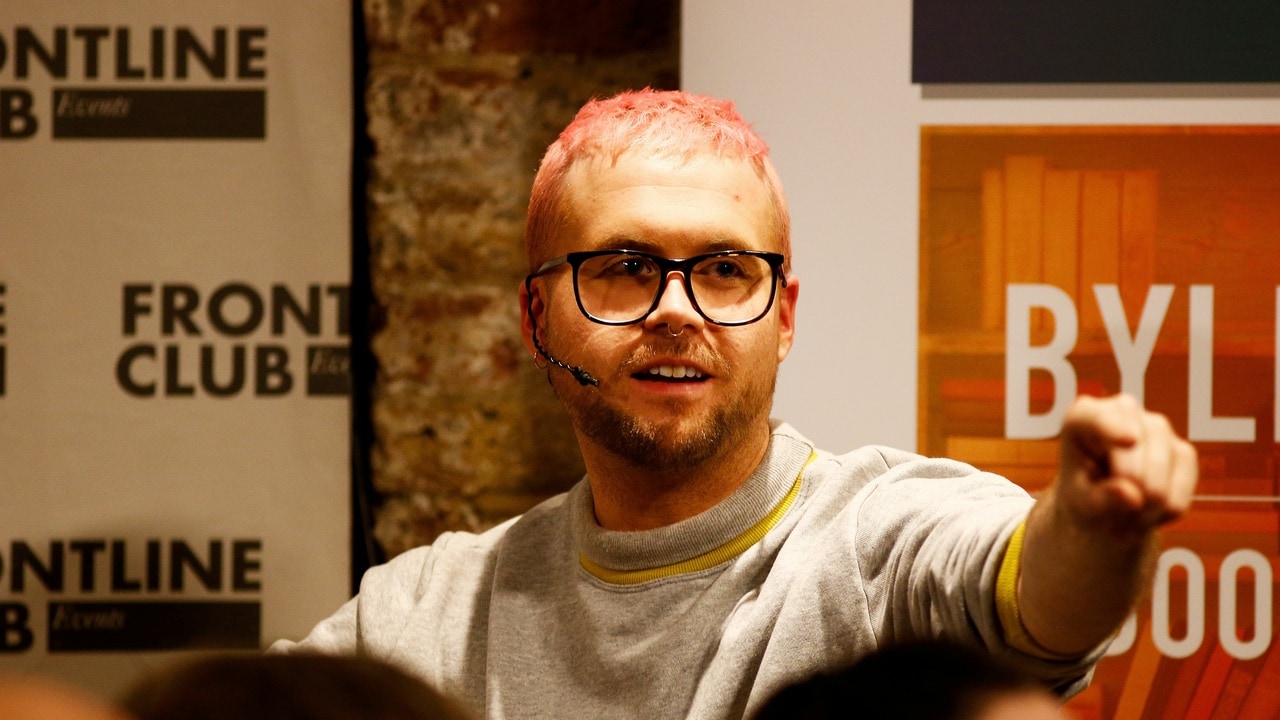 One, you take the whole Cambridge Analytica incident lightly and simply modify your privacy settings on the social network because you just can’t let go of Facebook. Two, you delete your profile entirely, wiping yourself from Facebook’s servers. Or three, deactivate your profile and go on a Facebook sabbatical, in the hopes that the social network will find a way out and you are ready to forgive it for all of its mistakes.

“This may sound weird, but is there any way to back up my Facebook data?”

Yes, there is. Turns out, Facebook does have a backup button that will let you download almost everything you have been sharing on the social network and “some more”.

Simply hit the down arrow button at the top of your profile page, hit Setting > General Account Settings > Download a copy of your Facebook data > Start my archive. A lot! You will have to be on a PC or laptop when you do the same.

This would include your Timeline information, shared posts, photos, video and more. As an added bonus Facebook will also throw in the kitchen sink by giving you data about the ads you have clicked on, the IP addresses you have logged on from and plenty more stuff that you would normally not be able to access using your standard Facebook login and password. The data also includes those searches you made on Facebook so yes, Facebook does track and save everything about you once you log in.

Now that you know how much Facebook loves you, here’s how to go about deleting your Facebook profile

Once you have downloaded and backed up your Facebook data locally (on a PC), you will now be one step closer to ending your relationship with Facebook.

“So where’s my delete button?”

There is one, but it isn’t easily accessible. The closest you can get through once logged in is through Settings > General Account Settings > Manage Account. However, from here you will only be able to give someone else (a legacy contact) the power to delete your account once you have passed away. 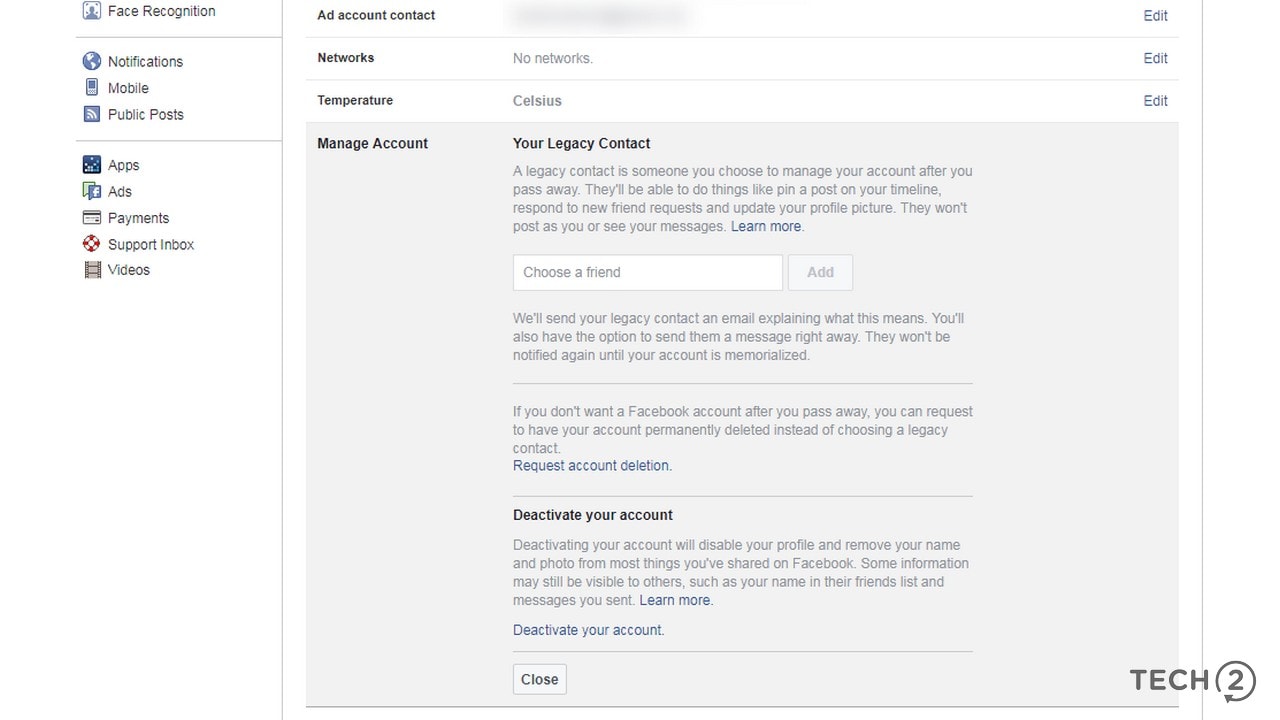 The delete button is accessible through the help pages. Click on the question mark icon and simply search Delete My Account or head to this shortcut after logging in. It’s here that you will get the Delete My Account with the pop-up making you aware of what you as a user are about to do.

Delete My Account does nothing instantly, in the sense that it does not wipe you (and your data) off Facebook’s like-happy social network. The button simply acts as a deletion request. The Delete My Account button is only accessible through the help menu.

Your friends will no longer be able to see you on Facebook, but your data will remain on Facebook for up to 90 days. After 90 days your ghost on Facebook remains, showing up in the form of messages you may have put on friends posts.

Just in case you change your mind, you can also cancel your deletion as Facebook will not submit your request for a few days after submission.

Yes. You can do that too. It’s called deactivation.

Deactivation is different from deleting your Facebook account entirely. It lets you take a break from the social network and is a good option for those who are angry about the whole data sharing issue but are not losing their faith in Facebook. Deactivation also will let you go off radar for a while, making you invisible on Facebook. You can then at a later point activate your stagnant profile (and data) and begin posting again. In the period of deactivation, your friends will not be able to find you on the network. They will not even be able to look at your timeline. They will, however, be able to see your older messages in posts. In short, it basically freezes your profile data.

So now that you have left Facebook, what happens to your Instagram and WhatsApp accounts? They are all connected you know…