Daiwa D50F58S is a step in the right direction for the company but may struggle to stand out in this highly competitive segment.

With official Android TVs selling at extremely affordable rates, there is no real reason to bother with AOSP (Android Open Source Project) based Smart TVs. It is typically the mobile version of Android OS repurposed for TV that provides bits and pieces of everything, but seldom the proper high-res TV experience. So why review this TV, you ask? There were a couple of things about this Daiwa D50F58S smart TV that triggered my curiosity. Firstly, the mention of Quantum Luminit display, and secondly, AOSP based on Android 8.0 - something I hadn’t come across before. So let’s see how this TV performs and where it stands with respect to the competition. 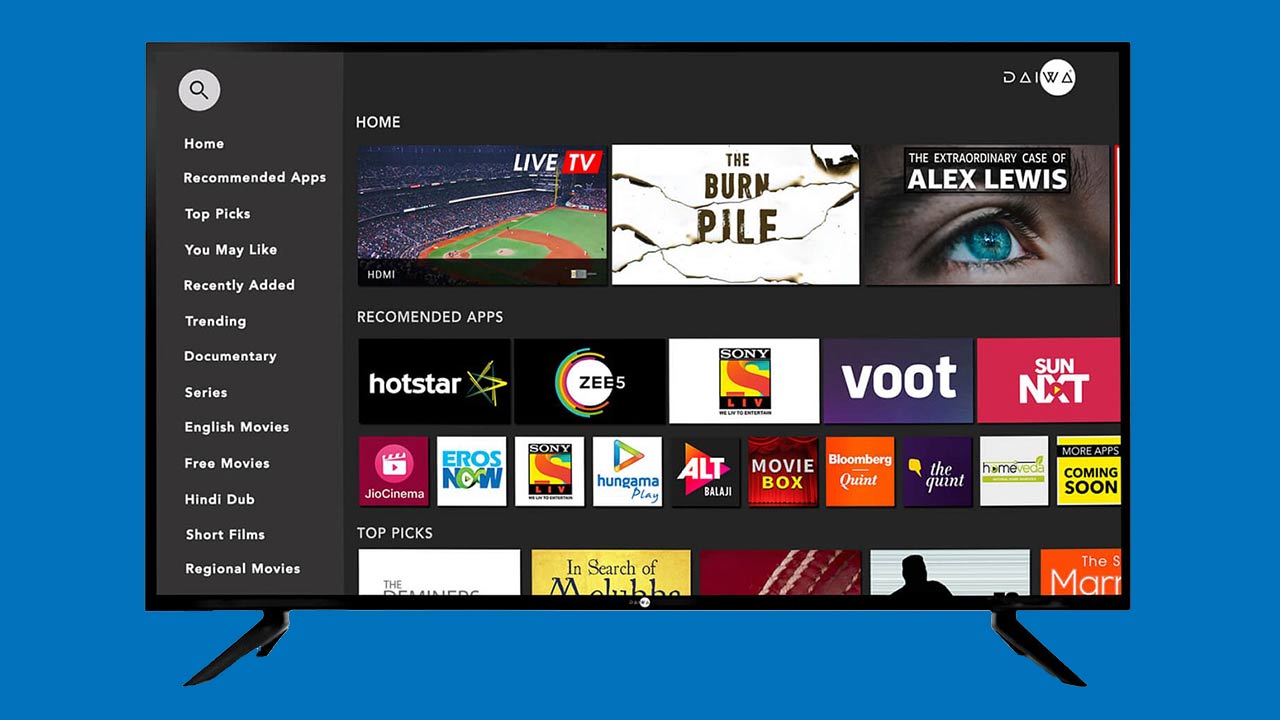 The Daiwa D50F58S sports a fairly standard design with narrow bezels along the edges of the 49-inch screen. Nothing about the design stands out, nor is there anything glaringly bad about it. Like most TVs, it can be wall-mounted or placed on a desk using the bundled stands. A pair of plastic stands with rubber feet hold the TV firmly in place. Initially, I got two stands for the same side with my review unit, but the company promptly replaced them after being informed about it. Hopefully, there won’t be such a goof-up in the retail units.

Two USB ports, coaxial AV input, optical audio out and a 3.5mm headphone jack can be found on the side of the TV, while a pair of HDMI ports, one RJ45 connector and another A/V input are located along its lower edge. The ports aren’t hard to reach if you place the TV on stands but I would have preferred to see the HDMI ports on the side panel. That way they would be a lot more accessible if you choose to wall-mount the TV. Also, I would have liked to see a third HDMI port given the number of devices that can be plugged into TVs these days. Like all smart TVs, this Daiwa TV has built-in WiFi that supports B/G/N standards and connects at 2.4GHz. The Daiwa D50F58S has a Full HD 49-inch screen with a resolution of 1920 x 1080 pixels and direct LED backlighting. The company claims to have used an A+ grade panel with 60 Hz refresh rate, but there is no information about the panel type or maximum brightness levels. It seems to be a VA Panel. Two words ‘Quantum Luminit’ can be found in the features list but there is no mention of the same in the product description or spec sheet. Mind you, it is not to be confused with Quantum Dots on a QLED panel. Probably that’s what got me intrigued in the first place.

Moving on, a pair of bottom-firing stereo speakers rated at 20 Watts RMS deliver the audio output. As I mentioned earlier, this isn’t an official Android TV, and its UI is built on top of Android 8.0. I will talk about the UI in a bit more detail later. It is powered by a quad-core processor with 1GB RAM and 8GB of internal storage (shared with OS and preinstalled apps) which is standard for most budget TVs. Since this isn’t a certified Android TV, you miss out on certain perks like stock UI and built-in Chromecast. 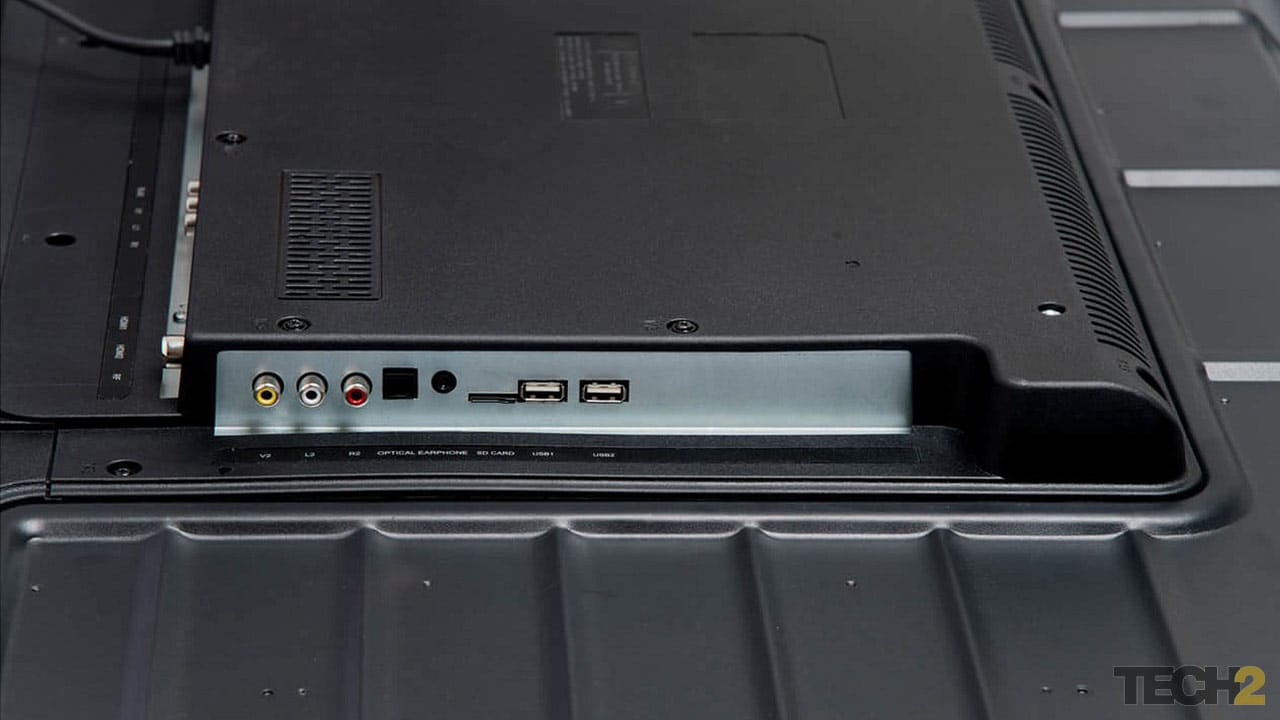 You do get apps for all major streaming services like Youtube, Hotstar, Amazon Prime Video, Netflix etc. either pre-installed or on its app store. The bundled IR remote has the necessary keys but is nowhere near as fluid as the Bluetooth remotes you get these days. There are no motion sensors or voice input options here either. You do get a Mouse mode on the remote that can test your patience.

The picture quality on the Daiwa D50F58S is a mixed bag. The panel is bright, viewing angles are good and the colours are quite vibrant. However, they feel slightly over-saturated at times. The contrast is not that great though, but just about acceptable for a budget TV. Dark areas look a bit too dark and flat, and a lot of detail is lost. For example, dark hair looks like one black blob with very little resolved detail. That was the case even when viewing high-quality Full HD content.

You do get a few picture presets and adjustments, but the TV doesn’t give you options to finetune aspects of the picture like brightness, contrast, colour, sharpness etc. Full HD and 4K videos (scaled to 1080p) look good on this screen except for the aforementioned contrast issue in dark areas. 720p content looks fine too, but anything lower looks soft and washed out. It would be a bit too much to expect a great upscaling engine in a budget TV. Having said that, the overall picture quality was a marked improvement over certain Daiwa models I had tested a year and a half ago. So the company is heading in the right direction; they just need to move a bit quicker.

The TV has a pair of stereo speakers that claim to deliver a total output of 20 Watts RMS. The audio output is quite loud and I did not have to raise the volume level beyond 60% during the course of my testing. However, the overall sound quality is poor as it almost completely lacks bass and sounds tinny. It starts to sound shrill as you increase the volume beyond 40%.

For normal TV watching or sports, one can live with it, but it’s not good enough for watching movies or listening to music. It would be a good idea to plug in a soundbar or some other external speaker system if you prefer good-quality sound. The optical audio out or the headphone jack can come in handy for that.

This TV takes about 40 seconds to boot which is par for most smart TVs. It doesn’t have the quick resume from standby feature found on a bunch of smart TV models these days, wherein the TV starts in under 5 seconds from standby mode. Video file format support through USB is very good. It played almost every file with various popular codecs I threw at it smoothly. And if the default player cannot play something, you have the option of installing VLC player too.

The biggest issue with the Daiwa D50F58S is its user interface that the company calls The Big Wall. There are far too many bricks in this wall, or should I say tiles? It feels cluttered and there is just too much content that’s thrown in your face. A lot of TV brands are trying to aggregate content from various providers and present it to the user. Case in point, Patchwall UI from Xiaomi. Daiwa has opted for something similar but overcooked it even more. Not that I am a fan of Patchwall either, but The Big Wall is a bit too chaotic for my taste. Users will take a fair amount of time finding options they actually need.

The problem compounds further within apps, where you have to use a combination of direction keys and the mouse feature on the remote to navigate through content and select something specific. The mouse isn’t an air mouse with motion-sensing but just a cursor that’s again controlled using the same direction keys on the remote. Navigation within apps can really test your patience. The ideal option is to simply buy and plug in an Amazon Fire TV Stick and consume content on it. Its user interface feels blissful after having used the one on this TV.

The Daiwa D50F58S comes with a third-party app store that provides you with a wide variety of apps, including those for all major streaming services like Netflix, Hotstar, Amazon Prime Video, Sony LIV, Voot etc. YouTube app was preinstalled on the TV along with a couple of others. While most services work fine, the video quality isn’t great. The resolution seemed to be capped at 480p for most and 720p at best for some. The AOSP shortcomings continue on Android 8.0 too. Most of the apps were mobile versions loosely adapted for TV. Again, better to invest in a Fire TV Stick to bring the best out of this 1080p screen, unless of course, you plan to primarily watch HD channels on DTH.

The Daiwa D50F58S can be purchased for Rs 25,990 with a one year warranty on Daiwa’s website or certain offline vendors. The pricing is decent for a 49-inch TV but the competition is too stiff in this segment. For a similar price or even a few thousand less, you can get similar-sized Full HD and 4K smart TVs from brands like Vu and Blaupunkt with better picture, sound and simpler user interface. For just a couple of thousand Rupees more (or for the same price in online sales), you can get 50-inch 4K models of official Android TVs from Thomson and iFFALCON (TCL), that come packed with perks like clean UI, voice commands, more recent version of Android for TV and Chromecast built-in. Not just that, the picture and sound quality are significantly better too. So while this Daiwa TV offers a marked improvement over its predecessor, there is no compelling reason to buy one unless you find it close to 20-21K mark. If you have a budget of over Rs 25,000, there are better options available. Here’s our list of best smart TVs under Rs 30,000 to help you choose the right one.