Curiosity rover all set to trek across Mars again

The six-wheel rover has been parked for more than a month at a sand dune where it has been busy scooping up soil.

Los Angeles: After playing in the sand, the Curiosity rover is poised to trek across the Martian landscape in search of a rock to drill into, scientists reported.

The six-wheel rover has been parked for more than a month at a sand dune where it has been busy scooping up soil, sniffing the atmosphere and measuring radiation levels on the surface. Its next task is to zero in on a rock and that requires driving to a new location. 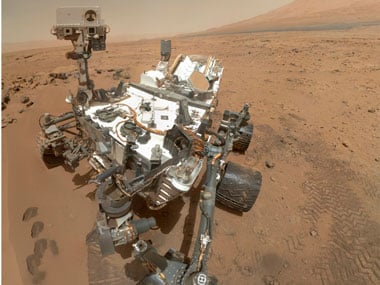 Mission deputy scientist Ashwin Vasavada expected Curiosity to be on the move in the "next few days."

"It's the bedrock which really gives you the story of ancient Mars," said Vasavada of the NASA Jet Propulsion Laboratory, which manages the USD 2.5 billion mission. "The soil is a little harder to interpret because we don't know how old it is or where it came from."

The car-size rover touched down in Gale Crater, an ancient depression near the Martian equator, in August on a two-year mission to probe whether the landing site once had conditions capable of supporting microbial life. Armed with a high-tech suite of instruments, it's the most sophisticated spacecraft to ever land on the red planet.

During the first three months, a weather station aboard Curiosity detected brief drops in air pressure, a sign of whirlwinds in the region.

"These events are starting to occur more and more often," said Manuel de la Torre Juarez of NASA JPL. "We expect to see more in the future."

Previous rovers have spotted and even recorded dust devils dancing across the Martian terrain, but scientists said Curiosity has not yet seen evidence that the swirling winds have lifted dust.

Curiosity's ultimate destination is a 3-mile-high (5-kilometer-high) mountain rising from the center of the crater floor that's rich in mineral deposits. Scientists had hoped to drive to the base before the end of the year, but that doesn't look likely after the extended stay at its current spot.