Could a small video-game's grand success be an economics lesson?

In January 2011, the founder and 'grand poobah' of a small indie game studio called Carpe Fulgur LLC announced on his blog that they'd sold 100,000 copies of their first title, making it a rather unusual hit in the video-game business.

Singapore: In January 2011, the founder and 'grand poobah' of a small indie game studio called Carpe Fulgur LLC announced on his blog that they'd sold 100,000 copies of their first title, making it a rather unusual hit in the video-game business. The post was fascinating for a number of reasons, specially for it's curious insights into the economics of modern web-centric indie video games.

But let's talk briefly about the game itself first, which funnily enough, is also about economics. Called 'Recettear: An Item Shop's Tale' (pronounced 'Racketeer'), Carpe Fulgur's debut was a quirky, almost joyous English translation of an obscure Japanese videogame. In it, somnolent protagonist Recette finds that her dad, who has mysteriously disappeared, has left her saddled with a mountain of debt. Constantly bothered by a persistent and....interesting collection agent, Recette decides that ruthless capitalism is the only way out of this financial hole, and opens an 'Item Shop' - a common sight in most role-playing videogames, where would-be world saviours purchase potions, gear and weapons. 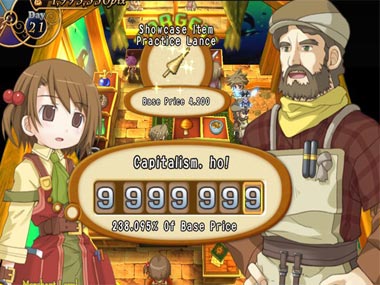 The gameplay, which involves running about maze-like dungeons finding precious items to sell to your customers at a profit, wasn't just a wonderfully meta video-game experience, but a prescient indicator of 2011's most interesting video-game trend: the wonder of digital distribution via 'bundles'.

Here's how you do it. Find precious games from the recesses of the maze-like Internet, put them together in an easy-to-install package, set up a shop website with a smooth checkout, and let people decide how much to pay for it.

We know from the explosion of app stores that this kind of digital distribution works, but the 'bundle' phenomenon did it in a gloriously guerrilla fashion.

The first Humble Indie Bundle, which appeared in mid 2010, included 5 top-notch indie games and the ability to pay-what-you-want with a portion of the proceeds going to charities like Child's Play or advocacy groups like Electronic Frontier Foundation. The bundle raked in an unbelievable 1.066 million dollars, with an estimated 31% of proceeds going to the charities. Together with the second Indie Bundle, which appeared soon after in December 2010, a total of 3 million dollars were generated, with little-to-no formal advertising and next-to-zero maintenance costs. Profits went directly to the small studios.

Deconstructing the bundles threw up some interesting observations: the games were offered free of any Digital Rights Management, leading some to argue that the patronage was, in part, a political act that showed gamers' opposition to these practices. The games were offered on multiple platforms, leading to generous contributions from (presumably grateful) Mac and Linux users. The bundles also sparkled with a playful personality: they'd throw in surprises like an extra game, or a game's soundtrack. , and the tone of their communication remained modest and honoured throughout.

The krakens were then unleased.

Indie devs Frozenbyte released the first developer-specific bundle, which made a neat $500,000 in 48 hours. The third Humble Bundle sailed over another million dollars, adding games till it included a faintly ridiculous 11.

Bundle #4 tweaked in a clever conceit: beat the current average price and you get bonus goodies: a whole extra game in Bundle #4, or the prototype of an unfinished game in #5. Some bundles stopped the 'DRM-free' tag, opting instead to give people access to the games on mainstream stores like Steam.

In late 2011 came Indie Royale, with another innovative pricing scheme: the price ratchets upwards from an initial amount as more people buy it, giving the early an incentive to get in there before prices rise. But if you choose to pay more than the current minimum, then you reduce the price for everyone else and get a special mention on the Indie Royale page. The last promotion on the site one sold about 31,500 bundles at an average final price of $5.

Recettear hit the 100,000 mark thanks to a 'Bundle' too. It was included in a sale bundle on the aforementioned Steam store, where it retailed for $5 (down from the usual price of $19.99). Even at this drastically reduced price, even with the bulk of the already-slim margins going to the store and the game's Japanese developers, and EVEN with the inevitable slow sales post the end of the promotion, the game made enough for Carpe Fulgur to settle in, and start work on future projects.

Could a small video-game's grand success be an economics lesson?