How many times do you drop your phone? According to Corning, that number stands at 7 per year.

How many times do you drop your phone? According to Corning, that number stands at 7 per year. While Gorilla Glass 5 was designed to withstand 7 drops on average, that number doesn’t seem to have been satisfactory to Corning. The recently announced Gorilla Glass 6 update from the company can apparently withstand an average of 15 drops.

Gorilla Glass is a name that has, over the years, and deservedly so, become synonymous with smartphone glass. This is understandable given that there are literally billions of devices currently circulating that use Gorilla Glass in some form or the other.

Why does glass matter?

As John Bayne, VP and General Manager at Corning put it, “glass conveys a certain quality and precision, which is why it’s so well adopted.” Plastic, which would seem like a shatterproof alternative to glass, doesn’t feel as nice as glass, and more importantly, is nowhere near as durable. Plastic will degrade in a fraction of the time that traditional glass will degrade in, and is also susceptible to distortion at higher temperatures.

Given that glass is so integral to a smartphone, one can appreciate how smartphone design is tied to the quality of the glass. The oh-so-common 2.5D glass and 3D formed glass that we’re seeing on devices in even the budget and mid-range segments of the market wouldn’t exist if it were not for the development of stronger, more durable glass. And it’s safe to say that Corning plays a rather significant part in this process.

Why does glass break?

The glass on smartphones is incredibly thin and getting thinner. At the same time, it has to be designed to be ever tougher. Over years of testing, Corning’s engineers have pinned the reasons for glass failure to two aspects. The first is a flaw in the glass itself, which will propagate, causing further damage, and contact with an external, sharp surface. 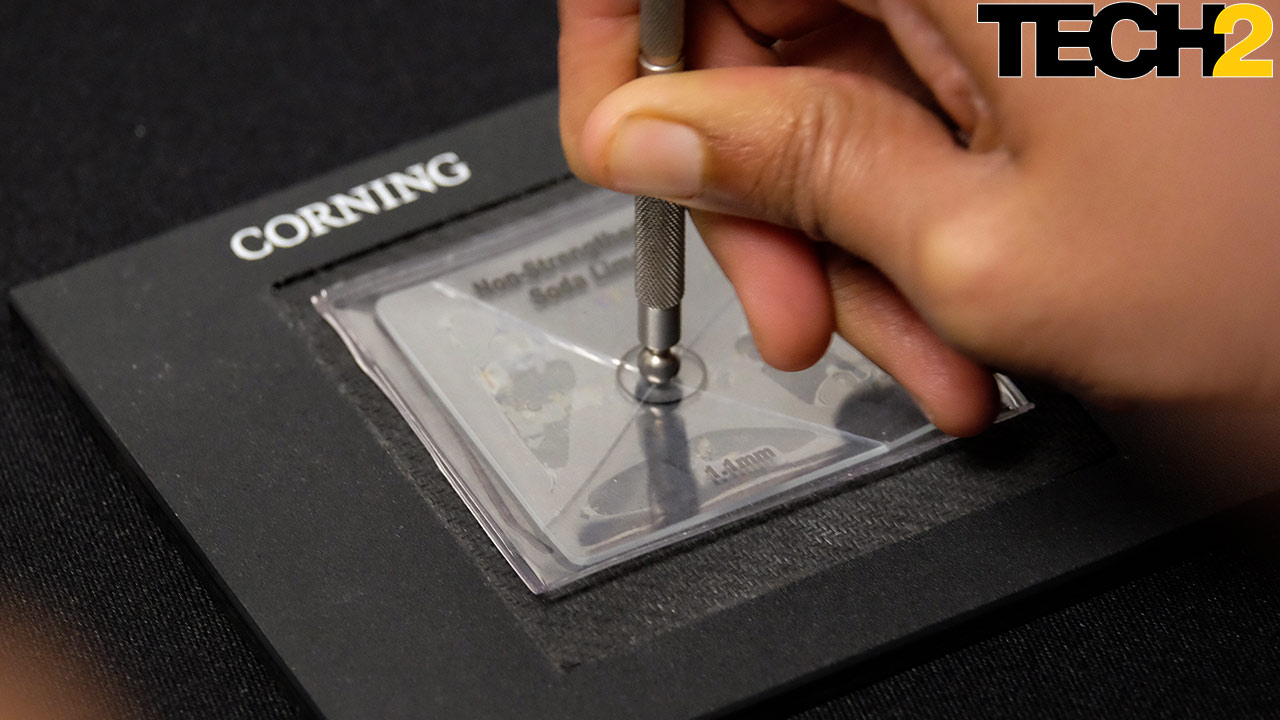 These two factors are responsible for 80 percent of failures that glass experiences.

According to Corning, Gorilla Glass 6 has been designed from the ground up to be stronger and more durable than Gorilla Glass 5. They claim that it’s an entirely new composition.

Corning runs its Gorilla Glass formulations through a gamut of tests. The most commonly used surface for these tests, be they drop tests or abrasion tests, are conducted on 180 grit sandpaper. Apparently, the sandpaper is a very good analogue to real-world surfaces like asphalt and concrete, and is also a more consistent test platform given that the other surfaces will wear out. Each glass formulation runs through a gamut of stress testing. Image: Anirudh Regidi/Tech2

The tests are conducted with various shapes of glass and from various orientations. This ensures that as many possible factors as can be considered are taken into account. Gorilla Glass 6 was, in fact, tested on 120 grit sand paper as well to ensure its durability.

Other tests include a 45-minute tumble in a cylinder filled with keys, coins, and other odds and ends one can expect to find in pockets and handbags. Gorilla Glass 6 is as scratch resistant as its predecessor, but it's much tougher. Image: Anirudh Regidi/Tech2

It must be noted, however, that Gorilla Glass 6 has the same scratch resistance as its predecessor.

When asked if the glass structure weakens with each successive drop, Corning was quick to point out that this is not the case. They state that every time a drop event happens – Corning-speak for when a phone falls down – there is a probability of failure. Their work with Gorilla Glass 6 revolves around reducing that probability.

An interesting point that was brought up at the event was that of the cost of implementing Gorilla Glass in entry-level phones of the type that are everywhere in India.

Corning’s take was that the cost of the cover glass is a mere fraction of the overall cost of the phone, possibly hitting 2 percent in the case of budget devices. The problem with using cheaper glass is that it’ll break easily.

For someone buying a phone in India, that purchase is a significant one – it could represent 2-3 months salary in many cases – and to have that purchase be rendered useless by one small accident will be heart-breaking. That slight increase in cost will be offset by the enhanced durability of using a stronger glass.

When will we see the new glass?

While nobody was willing to commit to a time-frame, Corning was quite confident that we’ll see  phones with Gorilla Glass 6 by the end of the year. Phone makers already have access to the technology and have been involved to some degree in the design process. It’s up to them when they want to deploy it.

Wearables like smartwatches propose a different set of challenges to engineers. Unlike smartphone glass, it’s more important that the devices be scratch-resistant than drop resistant. Your watch, for example, isn’t as likely to fall off your hands as it is to get scratched when the face brushes against a corner or a wall. 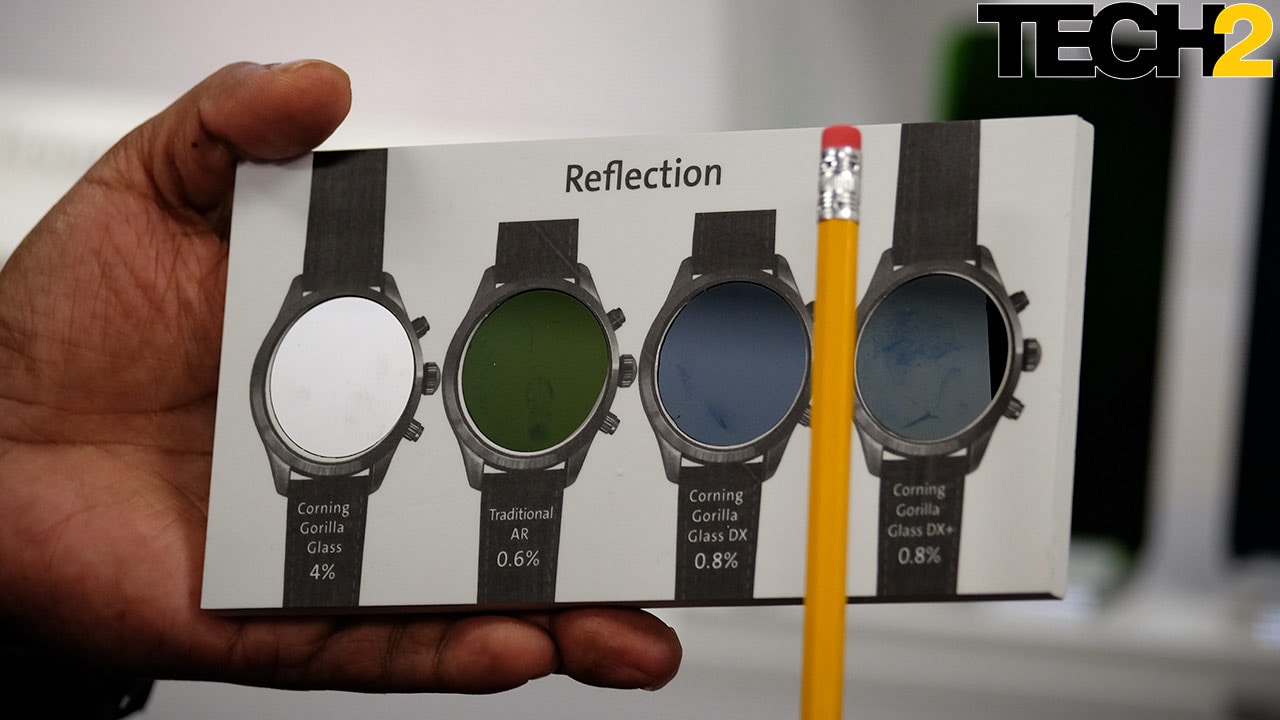 To that end, Corning has announced Gorilla Glass DX and DX+.

These new formulations are designed with better anti-reflective properties, optical clarity and scratch resistance. DX and DX+ apparently approach sapphire glass for scratch resistance and traditional Gorilla Glass for durability. Sapphire glass is very hard and the gold standard for scratch-resistant glass. It’s found on some of the most expensive watches and on the camera lenses of high-end phones like the iPhone.

The difference between DX and DX+ is that the DX is as scratch-resistant as Gorilla Glass. DX+ is stronger.

One of the most interesting demos we saw at the event involved something called Vibrant Gorilla Glass. This is basically glass that can be colored and textured using Corning’s proprietary inkjet printing technique. The demos we saw showed off glass that was made to look and feel like different materials, including snake skin, leather, wood, and various other materials.

Corning does this by painting the under side of the glass and then embossing a matching texture on the other side.

Disclaimer: This correspondent was invited by Corning to explore its headquarters in Silicon Valley. Corning was responsible for the flights, accommodation and other related expenditure for the duration of the visit.

Asus Zenbook Infinity Ultrabook to be unveiled at Computex next month