Few cabinets offer this much flexibility, and fewer still offer it at this price.

At 7k, it’s not too expensive, and it’s one of the few cabinets in this price range that includes multiple addressable RGB fans (ARGB, get it?).

The 511 is a mid-tower chassis with support for everything up to E-ATX motherboards (limited support). You get a mesh front panel, behind which the three included ARGB fans are housed, a top vent with a magnetically attached dust filter, a rear exhaust vent with no mesh (this can be a problem, as I’ll explain later), and a PSU and HDD shroud at the bottom that doesn’t extend all the way to the front of the cabinet. The bottom-mounted air intake for the PSU includes a dust filter. The MasterBox 511 ARGB cabinet is a simple, yet very functional design. What sets it apart is the added bling of the ARGB fans and spacious interior. Image: Anirudh Regidi

The design is simple, mostly tool-less, and very functional.

The tempered glass side panel (Yay!) is mounted with floating thumb screws, as is the motherboard panel.

You’ll need a screwdriver for mounting the PSU, motherboard, and GPU, but the SSDs and HDDs can be attached with minimal effort and no tools. 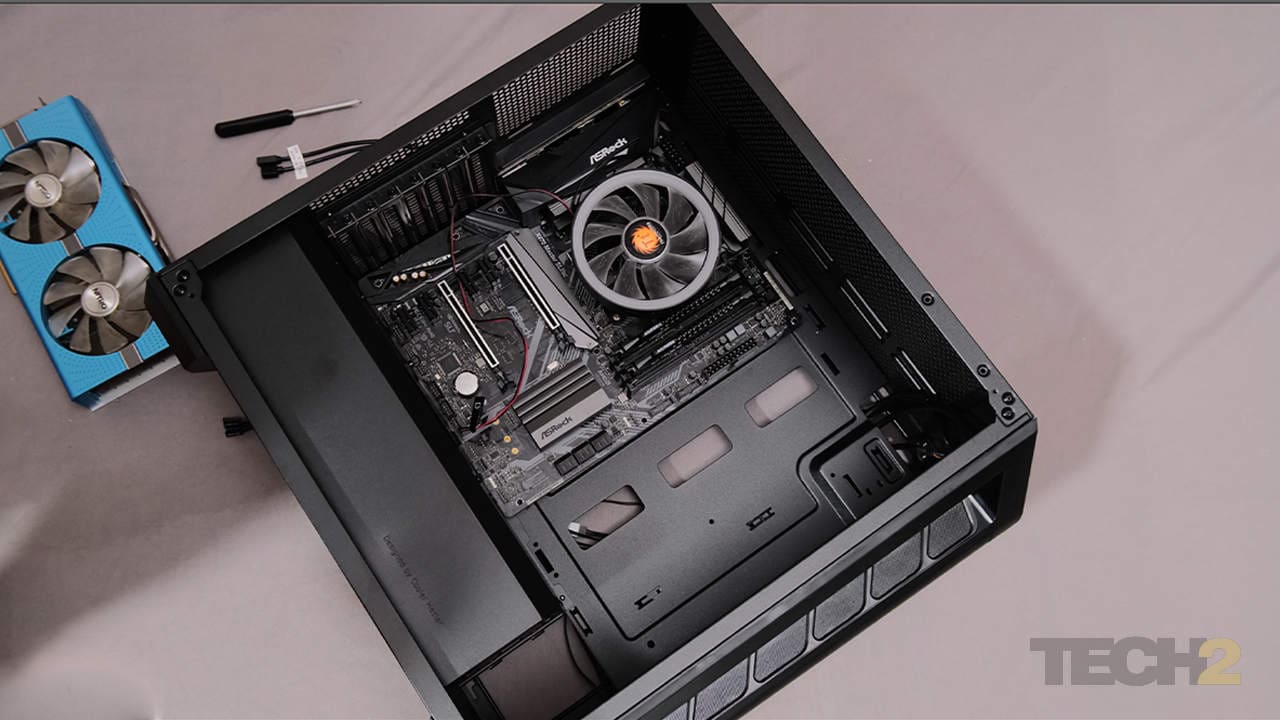 ATX boards vanish within the cavernous interiors of this cabinet. Image: Anirudh Regidi

Speaking of, the chassis can hold 3x SSDs and 2x HDDs by default (or up to 5x SSDs and no HDDs, depending on your config), and you can mount an additional SSD if you purchase a mounting bracket separately.

Cable-management cut-outs are present all over the motherboard at appropriate points, and there are attachment points at the back for cable-ties. With a bit of effort, you can end up with a very clean build. 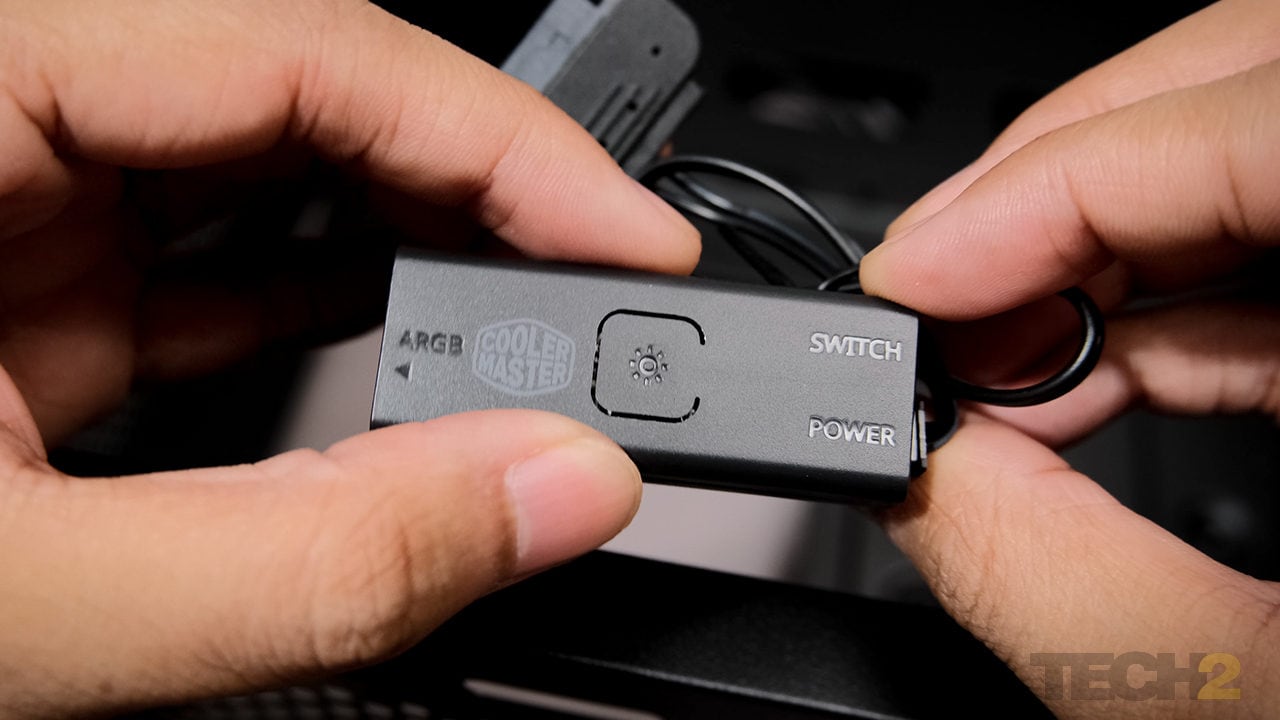 An ARGB controller is included in the cabinet, but this control can also be routed to the reset switch on the front panel, which is, I think, more useful. Image: Anirudh Regidi

The ARGB fans can be controlled via an included controller, the front panel reset button, or via a supported motherboard’s ARGB header. The fans themselves can cycle between a score of presets at the press of a button. The ARGB fans are front-mounted by default, not very loud, and reasonably effective. Image: Anirudh Regidi

For cooling, you only have the three front-panel fans, which means that by default, you have to go with a positive pressure design, especially with an open rear vent.

My one issue with the design is radiator clearance and placement.

While the radiators can be mounted at the top or at the front, the clearance at the top for motherboard components is only 44 mm. 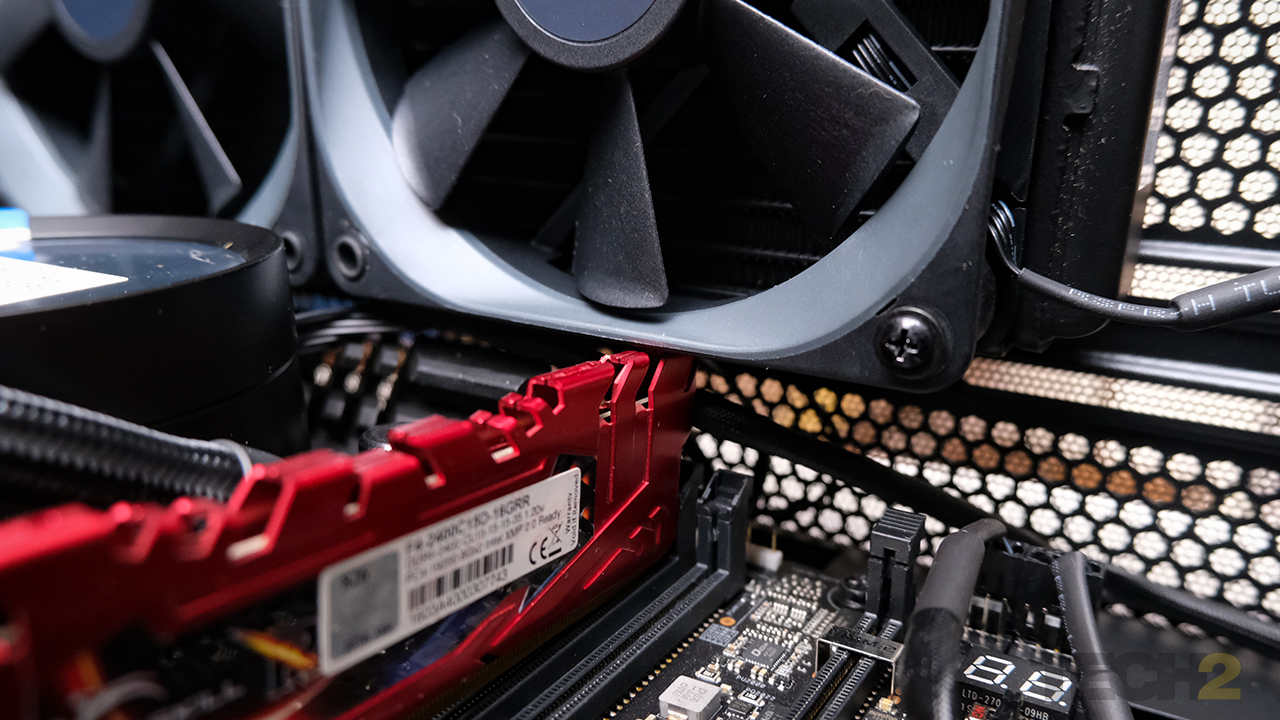 If you can’t mount the radiator up top, then you need to mount it on the front panel. The three 120 mm front panel fans will then have to be shifted up top, which brings with it yet another issue. The screws for the fans stick out slightly when they’re mounted in the top panel, which means that the magnetic mesh doesn’t sit flush with the top of the case in such a configuration. 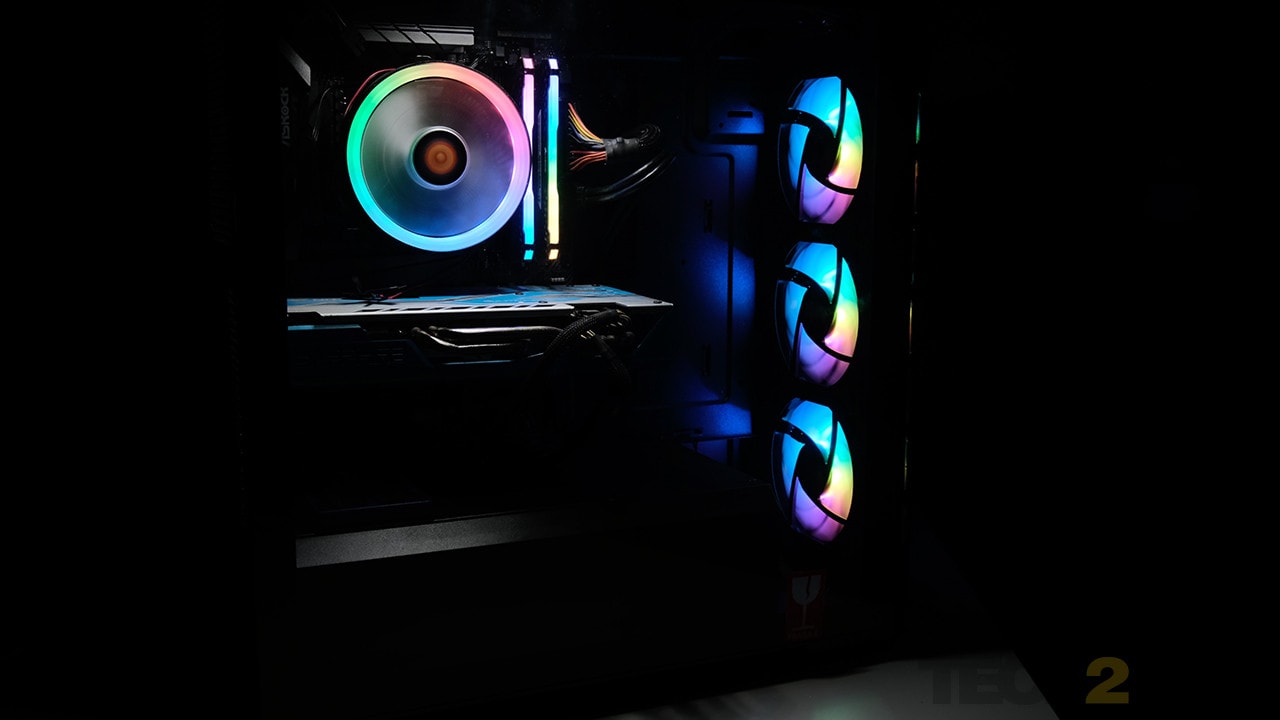 I must say, fully kitted out, this cabinet can look very nice. Image: Anirudh Regidi

There’s also the issue of airflow: Even with a front-mounted radiator, there’s more than enough clearance for monster GPUs like the RTX 3080. Image: Anirudh Regidi

This was a real issue when I installed an Intel 10900K and RTX 3080 in the system. These components run HOT. Overclocked, the Intel CPU would hit 94°C in seconds, and the GPU routinely ran at over 86°C. With a front-mounted 240 mm radiator – my only option given that my high-performance RGB RAM had a massive heatsink – the CPU and GPU would both hit thermal limits fairly quickly. If you have a relatively large PSU and you use the 3.5” drive bays, you’re going to struggle a bit with stashing away excess cable. Image: Anirudh Regidi

With the side panel removed, temperatures immediately dropped by several degrees and neither hit its thermal limits. 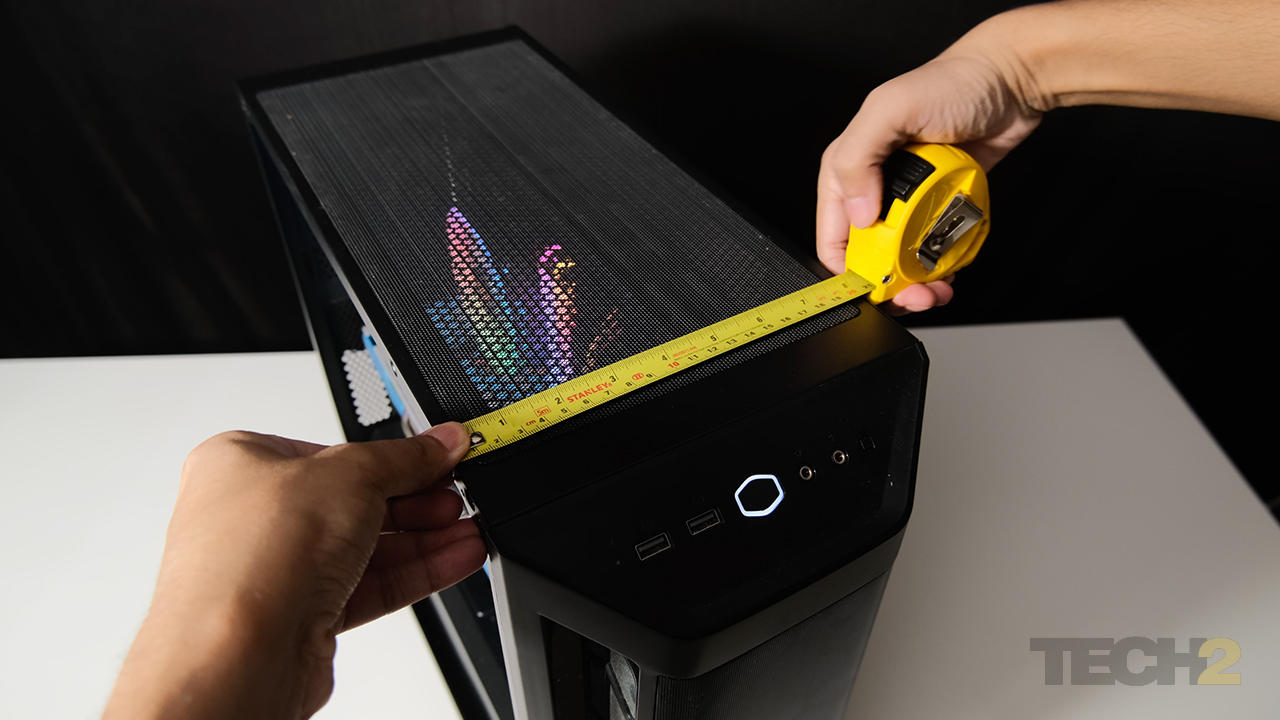 The large vent at the top is a nice touch, and I really like the magnetically mounted mesh. You might want more fans up top, however, for better ventilation. Image: Anirudh Regidi

Airflow and temperatures aren’t a problem for more mid-range components, however. I tried various configurations involving an Intel 10600K, Intel 6700K, and AMD 1600x paired with a much cooler RTX 2070 Super GPU, and I had no issues with heat management.

These components did get hot under heavy loads, about 70–80°C in most cases, but they never hit their thermal limits, even with a 20% overclock applied.

If you’re going for a high-end build, you’ll need to consider your components carefully, taking into account your intended cooling config and clearance for RAM. You might also want to consider investing in additional, high-airflow fans.

The actual build process was a breeze. The cabinet is fairly large and roomy, and manoeuvring tiny cables through various vents and gaps wasn’t a challenge. Everything was easy to mount, and the front panel also comes off to make it easier to mount/unmount fans and radiators.

Do bear in mind that the clearance between the PSU and the HDD tray is a bit of a problem if you have a large PSU. The Corsair AX850 PSU and its cables just barely fit behind the trays. Excess cabling also has nowhere to go. Smaller PSUs slot in just fine.

If you’re not using the 3.5” HDD brackets, you can remove them and take advantage of the additional clearance for cable management.

I really liked working with the MB511 A-RGB. It’s a spacious cabinet that is, for the most part, well-designed. The tempered glass side panel is nice to have, and the A-RGB fans do add some flair to the design.

While its default config isn’t ideal for really high-end PC builds, and there’s nothing you can do about the clearance issues, you do get support for 7 fans, and/or dual 360 mm radiators. Few cabinets offer this much flexibility, and fewer still offer it at this price.