As per a Times of India report, the app seemed to have disappeared from the Google Play Store after the French hacker on Sunday warned that he would look into the Indian National Congress's (INC) app and would put out a report shortly.

The Bharatiya Janata Party (BJP) on Monday accused the Congress of sharing users' data with a Singapore-based firm soon after a French vigilante hacker claimed that its server was located in the island city-state instead of India. 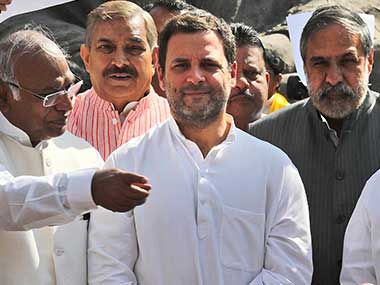 The accusation comes a day after Congress President Rahul Gandhi referred to a media report in which the French hacker Elliot Alderson, in a series of tweets alleged that the personal data including email IDs, photos, gender and names of the users of Prime Minister Narendra Modi's mobile app were being sent to a third party domain without their consent.

"Hi! My name is Rahul Gandhi. I am the President of India's oldest political party. When you sign up for our official Application, I give all your data to my friends in Singapore," BJP leader Amit Malviya said in a series of tweets attaching screenshots of the Congress' website privacy policy listings.

Malviya is in-charge of the BJP's national information and technology wing and he shared the information on the social networking site soon after Alderson in a series of tweets claimed that the Congress was also storing the data in Singapore.

"When you apply for membership in the official Congress android app, your personal data are send encoded through a HTTP (Hypertext Transfer Protocol) request to http://membership.inc.in," the French hacker said.

I found something interesting on the With INC #android app, details will be published tomorrow 😘

As per a Times of India report, the app seemed to have disappeared from the Google Play Store after the French hacker on Sunday hinted that he would look into the Indian National Congress's (INC) app and would put out a report shortly.

A day later, on Monday, Alderson alleged that the app was indeed sending across the data of registered users to a server in Singapore.

To this, the INC's social media head Divya Spandana tweeted out an explanation, stating the Congress app was "defunct for while" and that that the party registers members through its INC website.

The URL for membership on the INC app has been defunct for a while now. Our membership is through the INC website. How difficult is that to understand- https://t.co/UbS5vrTcNL

Alderson, on the other hand, told the Times of India, that "they (Congress) got scared after my first tweet, saying that I will look into their app." Today's developments come after Alderson first tweeted out details of the Narendra Modi's NaMo app on Saturday.