Taiwanese electronics giant Asus has today announced new editions to its ZenBook lineup of laptops with the New ZenBook 13/14/15 and also the Exclusive ZenBook Edition 30 at Computex 2019. The ZenBook Edition 30 is symbolic to Asus' 30th anniversary and among other special things, it also features hand-crafted genuine Italian leather lid cover.

Asus says that the new ZenBook's feature the smallest footprints in their class which has been made possible with the frameless NanoEdge displays. As the model numbers indicate, the new ZenBooks come in screen sizes of 13-inch, 14-inch and 15-inch. Asus claims that the ZenBooks have a 95 percent screen-to-body ratio which could certainly make for an immersive viewing experience. All the ZenBooks have FHD resolution displays. The ZenBooks also retains the ScreenPad 2.0, which is a display in place of a trackpad, and it now has a larger 5.65-inch touchscreen that offers many new features and benefits, as per Asus.

Remember that laptop with a screen in lieu of a touchpad? Well, @asus has just given it an upgrade. #ScreenPad2 now adds support for sheets, slides and documents. It’s available on the entire #ZenBook line as well as on the #Vivobook S14/15 pic.twitter.com/PUFmamXIHD

The ZenBook has an aluminium chassis Zen-inspired spun-metal finish on the lid. The laptops weigh from 1.22 kg to 1.65 kg depending on what configuration and model you take. The company says that the ASUS ErgoLift hinge design gives the user ease in typing and also helps in cooling of the device. From a processing standpoint, the new ZenBooks feature the latest 8th Generation Intel Core i7 processors along with NVIDIA GeForce MX250 discrete graphics. The ZenBook 15 has a NVIDIA GeForce GTX 1650 GPU.  Memory options include up to 16 GB of RAM and up to 1 TB of  PCIe SSDs. 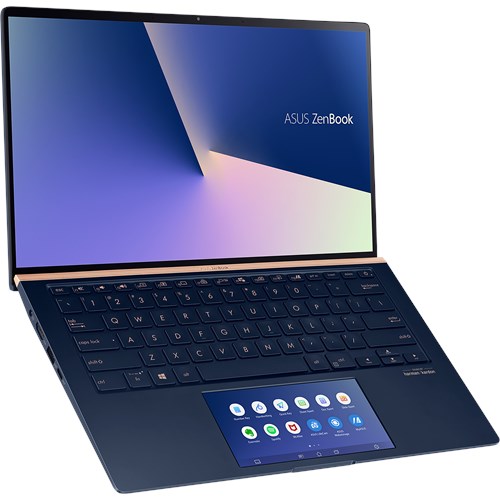 The ZenBook 30 is a limited edition device which celebrates the 30 year anniversary of Asus. The internals of the device are the same as the new ZenBooks. However, on the outside we see lid encased in luxurious Pearl White genuine Italian leather.

Next up, we have #ZenScreenTouch. A portable display from @asus that connects to your phone, tablet or PC via micro-HDMI or USB-C. It even has built-in speakers. pic.twitter.com/cpSor9bZ0J The logo on the lid is 18-karat rose-gold-plated. Apart from that, you will also get a leather-look box and mouse pad, and a genuine-leather sleeve. It also comes with a touch-screen display instead of a normal trackpad. Asus will announce the pricing and availability of the new laptops shortly. They should be making their way to the Indian markets as well.

Disclaimer: One of our correspondents was invited by ASUS India for Computex 2019 at Taipei, Taiwan. All travel and accommodation expenses were taken care of by ASUS.

Asus ZenBook Pro 15 with a touchscreen display instead of a trackpad launched at COMPUTEX 2018 at a starting price $2,299