The team looked to the 2013 Chelyabinsk event when a meteoroid exploded over Chelyabinsk, Russia, to explain the phenomenon.

When a meteor comes hurtling toward Earth, the high-pressure air in front of it seeps into its pores and cracks, pushing its body apart and causing it to explode, say scientists. Researchers knew that meteoroids often blew up before they reach the Earth's surface, but they did not know why. The new research, published in the journal Meteoritics and Planetary Science, suggests that Earth's atmosphere is a better shield from meteoroids than previously thought. 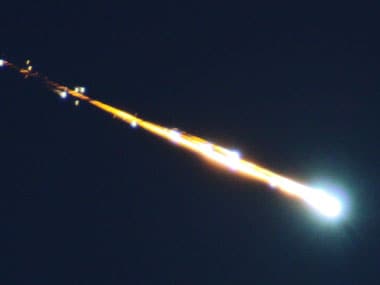 "There's a big gradient between high-pressure air in front of the meteor and the vacuum of air behind it," said Jay Melosh, Professor of Earth, Atmospheric and Planetary Sciences at Purdue University in the US and co-author of the paper. "If the air can move through the passages in the meteorite, it can easily get inside and blow off pieces," Melosh said. Melosh's team looked to the 2013 Chelyabinsk event when a meteoroid exploded over Chelyabinsk, Russia, to explain the phenomenon.

The explosion came as a surprise and brought in energy comparable to a small nuclear weapon. When it entered Earth's atmosphere, it created a bright fire ball. Minutes later, a shock wave blasted out nearby windows, injuring hundreds of people. The meteoroid weighed around 10,000 tonnes, but only about 2,000 tonnes of debris were recovered, which meant something happened in the upper atmosphere that caused it to disintegrate.

To solve the puzzle, the researchers used a computer code that allows both solid material from the meteor body and air to exist in any part of the calculation. This new code allowed the researchers to push air into the meteoroid and let it percolate, which lowered the strength of the meteoroid significantly, even if it had been moderately strong to begin with. While this mechanism may protect Earth's inhabitants from small meteoroids, large ones likely won't be bothered by it, Melosh said.