Chinese scientists said on Thursday they have developed a super steel that has a high level of both strength and ductility.

Chinese scientists said on Thursday they have developed a super steel that has a high level of both strength and ductility, a breakthrough that may have a wide variety of industrial applications. 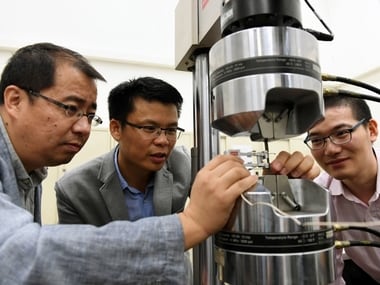 The research team uses a tensile machine to test the yield strength and elongation of steel. The University of Hong Kong.

Furthermore, its material cost is just one-fifth of that of the steel used in the current aerospace and defense applications, they reported in the US journal Science, Xinhua news agency reported.

Strength and ductility are desirable properties of metallic materials for wide-ranging applications, but increasing strength often leads to the decrease in ductility, which is known as the strength-ductility trade-off.

A Hong Kong-Beijing-Taiwan mechanical engineering team led by Huang Mingxin from the University of Hong Kong adopted a new manufacturing technique called deformed and partitioned (D&P) to address the problem.

"Therefore developing a strong and ductile breakthrough steel has been a long quest since the beginning of Iron Age in mankind history."

According to the team, the "breakthrough steel" belongs to the system of so-called medium manganese steel that contains 10 percent manganese, 0.47 percent carbon, 2.0 percent aluminum and 0.7 percent vanadium.