China’s content regulator on 30 October said it was unlikely to grant licences for the world’s hottest video game, PlayerUnknown’s Battlegrounds, as being too bloody and violent, thus effectively denying firms the opportunity to cash in. 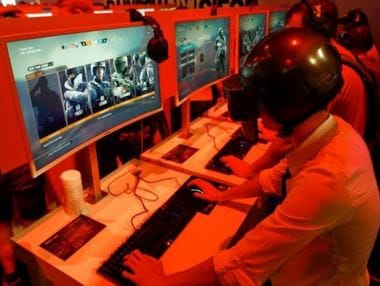 A cosplayer wears a self-made helmet of a character from the computer game PlayerUnknown's Battlegrounds. Reuters

The ban on the South Korea-made multiplayer game, whose players kill to be the last survivor, is the latest bid to cleanse internet content after President Xi Jinping painted a vision of China as a culturally confident rejuvenated great power in a speech this month to the Communist Party Congress.

The game’s gladiator-like battle “severely deviates from the socialist core value and the Chinese traditional culture and moral rule,” the China Audio-Video and Digital Publishing Association said in a statement on its website.

Its ethos also goes against the psychological and physical health of juvenile consumers, it added. The association, grouped under the umbrella of China’s top content regulator, the State Administration of Press, Publication, Radio, Film and Television, said SAPPRFT took a negative view of the game and others of the same kind, and any licences for it were unlikely.

Reuters’ telephone calls to the game's publisher, Bluehole Inc., to seek comment, went unanswered. Leading Chinese gaming and social media company Tencent Holding Ltd., which hinted on its verified site on China’s Twitter-like Weibo that it might introduce the game on its WeGame platform, did not respond to requests for comment.

Still, Chinese gamers can access the game through overseas gaming platforms, though the association, in its statement on Monday, said Chinese companies should not seek to research, develop and import such games.

Gaming platforms and live streaming sites should not provide promotion and advertisement services to such games, it added. Audiovisual content featuring topics ranging from drug addiction to homosexuality and incest should be restricted, a government-affiliated entity said in June.

China also bans a number of American television shows, such as “The Big Bang Theory” and “House of Cards”.