In their resignation letters, tech leaders did not name Trump directly but hinted that the move was in protest to his remarks on Charlottesville violence.

Following a series of comments US President Donald Trump made over the violence in Charlottesville, tech leaders have resigned en masse from the President's tech advisory board as a mark of protest. 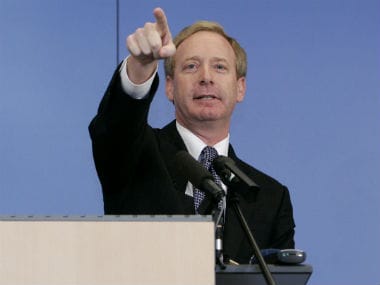 According to a report in Politico on Friday, more than half of the members of the 15-person Digital Economy Board of Advisors have quit. It was during the administration of former President Barack Obama last year that the board was set up to guide the federal government on the digital economy. "It is the responsibility of leaders to take action and lift up each and every American. Our leaders must unequivocally denounce bigotry, racism, sexism, hate, and violence," Mitchell Baker, executive chairman, Mozilla, was quoted as saying.

Microsoft president and chief legal officer Brad Smith also quit the panel on Friday, with a spokesperson saying: "Effective today, Brad is no longer a member of the group". Trump had blamed "both sides" for the deadly violence at the white supremacist rally. In a show of defiance, Trump told reporters in Manhattan that there were "two sides to a story" just a day after he had belatedly condemned racist hate groups for the mayhem at the "Unite the Right" rally in Virginia, the Washington Post reported.

He equated the white supremacists on one side with the "alt-left" on the other side and said that "alt-left" groups were "very, very violent" when they sought to confront the white nationalist and neo-Nazi groups that had gathered in Charlottesville. In their resignation letters, tech leaders did not name Trump directly but hinted that the move was in protest to his remarks on Charlottesville violence.

"There must never be equivocation in denouncing hate, bigotry, violence and racism," Baird said. Other confirmed resignations so far include president of the Institute of Electrical and Electronics Engineers (IEEE) Karen Bartleson; Sonia Katyal, a professor of law at the University of California; CEO of the Markle Foundation Zoë Baird; Greg Becker, CEO of Silicon Valley Bank; Oisin Hanrahan, CEO of Handy; and Corey Thomas, CEO of Rapid7.

For Trump, the mass resignation of the top tech leaders is troubling as he has been cultivating a pro-business image with them. Trump has also held several top level meetings with tech honchos since he assumed power. Earlier, CEOs of Intel, Merck and Under Armour also resigned from the US President's Manufacturing Council created by Trump, because of the noncommittal way he responded to the racist attack in Charlottesville.

Breaking their silence over the violence at a white supremacist rally in the US, Microsoft's Indian-born CEO Satya Nadella, Apple's Tim Cook and Facebook's Mark Zuckerberg also condemned the incident as "horrific" and a "disgrace" to the nation.