As neo-Nazi agitation claimed the life of a 32-year old paralegal, Heather Heyer, historically neutral tech companies have stepped out of their comfort zone and openly condemned far-right extremism. 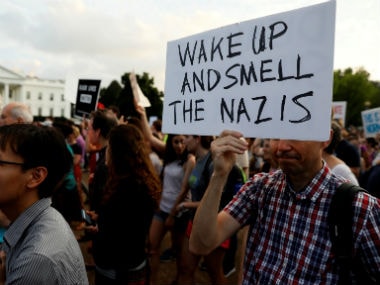 Many internet firms have flexed their muscles against white supremacy. Reuters.

The Daily Stormer, an alt-right website, which used to be hosted by GoDaddy, had organized the rally in Charlottesville. Anti-racism protesters marched out in a counter-rally, but then things turned lethal. Amidst sporadic violence, an alt-right protester drove his car into the ranks of anti-racism protesters, killing Heyer. If that wasn't bad enough, The Daily Stormer, in an article, were reportedly jubilant about the death of the woman and appeared to have taken great pleasure in denigrating her.

While Democrats and Republicans alike denounced the violence, Donald Trump's response did yet more damage by arriving late and accusing both sides of causing the carnage. Apple CEO Tim Cook called out Trump's response in a letter to employees stating that equating racists, white supremacists and Nazis with people standing up for human rights "runs counter to our ideals as Americans."

Tech companies in the past few months have been criticized of giving shelter to terrorist and extremist groups by giving them a space to conspire against fellow humans. These companies normally stay neutral by claiming that they stand for free speech. The Charlottesville violence, however, appears to have forced Silicon Valley into action and they have taken pro-active steps to condemn such behaviour and take a stand against white supremacists.

One of the first to be impacted by Silicon Valley's new stance was the organiser of the protest, The Daily Stormer. GoDaddy, horrified by The Daily Stormer's article on Heyer, promptly kicked the domain from its platform. It did not end there. Cloudflare, which provides CDN services and notorious for its stance on free speech, kicked Stormer further and dropped support as well. The site then sought refuge with a Russian host. Within 24 hours, the company was kicked off that host as well. The Russian govt cited intolerance for extremism as their reason.

In the meantime, Apple’s CEO, Tim Cook, not only condemned Trump's speech and the actions of the white supremacists, but even offered a donation to Southern Poverty Law Centre (SPLC) and Anti-Defamation League. Both are human rights groups. In his letter to Apple employees he said, “Hate is a cancer and left unchecked it destroys everything in its path. Its scars last generations.” Apple will also match employee donations to humanitarian organisations on a 2-to-1 basis and provide Apple users with an easy payment option for donating to SPLC via iTunes.

PayPal, which has blocked extremist sites in the past, is now actively seeking out and blocking more such sites.

In a similar attempt, even hospitality service provider AirBnB in October 2016 had pledged to treat everyone equally regardless of their background or orientation. In a statement given to The Verge, company CEO, Brian Chesky had said, “The violence, racism and hatred in demonstrated by neo-Nazis, the alt-right and white supremacist should have no place in this world.”

Meanwhile, Facebook’s CEO Mark Zuckerberg has condemned the attacks. Calling it equivalent to terrorism, the issue seems to be closer home for him, considering his Jewish ancestry. Mentioning his ancestry, Zuckerberg also said that Facebook would be deleting any comments or posts that glorify neo-Nazis. It will delete all white supremacist groups and does not intend to support them.

Moreover, Microsoft’s Satya Nadella and Google’s Sundar Pichai have condemned the attack. Calling for glorifying diversity, Nadella said, “There is no place in our society for the bias, bigotry and the senseless violence we witnessed this weekend in Virginia provoked by white nationalists,” he said in a note sent to his employees, in a report by PTI.

Google recently came under the scanner for a leaked memo on gender discrimination. Pichai tweeted his and the company’s unwillingness to glorify such trends of discrimination in the US.

Condemnation has reached even with dating sites, where OKCupid received an alert from users of an existing user who resembled Cristopher Cantwell, a neo-Nazi from a VICE documentary where he was upfront about his belief in white supremacy. The man was identified and banned for life ‘within ten minutes’ of the alert, tweeted OKCupid. Company CEO, in a statement to Gizmodo said, “We make a lot of decisions everyday that are tough. Banning Christopher Cantwell was not one of them.” As per the company, the removal was done based on the code of conduct, which every user must agree to before signing on for the service.

We were alerted that white supremacist Chris Cantwell was on OkCupid. Within 10 minutes we banned him for life.

Even Discord, a free chat service has shut down accounts related to Nazi ideology, one such being altright.com. According to a report by Gizmodo, the chat service meant for gamers community was also hosting forums for extremist groups.

Meanwhile, GoFundMe, a fundraising website, has generated close to $800,000 according to The Washington Post. This money generated would be used for those injured during counter protests. However, it has removed campaigns created for neo-Nazi or white supremacy agenda. In a similar fashion, Uber, in a message to its users, condemned these attacks and promised to provide round-the-clock assistance to its users.

These actions send a strong message of support for equality and diversity from tech companies, but a number of white nationalist, racist and neo-nazi sites still remain available online. Wiping out such content is never going to be easy, however.

Meanwhile, US digital rights group, Electronic Frontier Foundation, believe that by taking a political stance, the tech firms are infringing neo-Nazis’ right to online freedom of expression. However, the entire point of white supremacy means exclusivity and no diversity. Tech firms, especially Silicon Valley, which has tech CEOs belonging to different races, who are catering to a global audience on an everyday basis, cannot shy away from the responsibility they must shoulder.