The LHC is the world's most advanced particle accelerator, which began work in September 2008.

The European Organisation for Nuclear Research (CERN) is in the middle of giving the Large Hadron Collider (LHC), the most powerful particle accelerator in the world, a major upgrade. This is the second such long shutdown since the LHC opened in September 2008. Work on the reactor is scheduled to go on for two years.

CERN scientists are working on each individual part of the collider to get it running to its maximum potential. They are reinforcing and upgrading the entire accelerator complex and detectors. They are also changing the accelerator's interiors to make it more 'high-luminosity tolerant and radiation tolerant' and adding in four new connection cryosats to ensure all parts in the LHC remain at the same temperature (-271 degrees Celsius). The LHC's superconducting magnets, which are crucial to the bending and tightening of trajectories that the particles take, will also be removed and replaced, according to a statement.

After all the planned tweaking and replacing, the LHC is expected to be back in business by 2021. While out of commission, CERN is keeping LHC's followers updated every step of the way via its Instagram account. The pictures are popping!

📸 Our #PhotoOfTheWeek shows an interconnection between two magnets in the Large Hadron Collider (#LHC). ⠀ -⠀ During the second long shutdown (LS2), 22 magnets (including 19 dipoles) have to be replaced. Twelve have already been brought above ground and the last one is scheduled to be dismantled at the beginning of July. 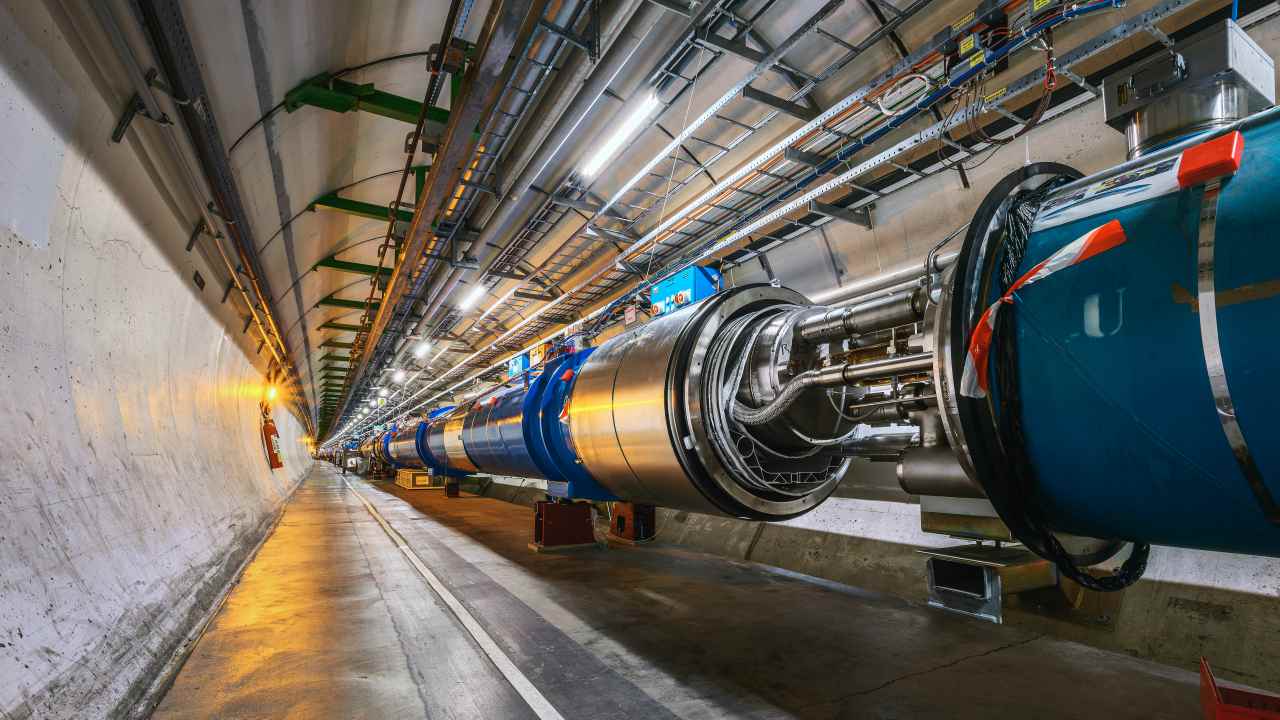 In the LHC tunnel during an upgrade. Image credit: CERN

CERN is the largest particle physics laboratory in the world, and the LHC, its most advanced particle accelerator. The organisation has shared images of the particle collide, with its exposed steel, colourful components and detailed explanations alongside each image.

The LHC is a 27-kilometer ring in which particles travel in a continuous loop with the help of superconducting magnets and several accelerating structures to give the particles' energy a boost at multiple steps along the way. CERN uses eight accelerators and two decelerators, joined together, to reach energies.

The LHC, an experiment that got off to a bumpy start in September 2008, is located in a 27-km-long tunnel deep beneath the border of France and Switzerland, the LHC has high-energy particle beams crash into each other at nearly the speed of light. It boosts particles, such as protons, which form all the matter we know.

📸 Our #PhotoOfTheWeek shows the Large Hadron Collider (#LHC) tunnel during the second long shutdown (LS2). ⠀ -⠀ #DidYouKnow that work for the High-Luminosity LHC is currently in progress 100 metres underground? This next generation LHC, which will begin operation in 2026, will reach luminosities five to ten times higher than its predecessor. This increased number of collisions will increase the chances of observing rare processes.   A post shared by CERN (@cern) on Aug 28, 2019 at 9:02am PDT

Accelerated to a speed close to that of light, the particles collide with other protons in collisions that release massive particles. By measuring their properties, scientists increase their understanding of matter and of the origins of the Universe. These massive particles only last a blink of an eye, and can't be observed directly. Almost immediately they transform (or decay) into lighter particles, which in turn, also decay.

CERN also has plans for starting a high-luminosity LHC, which is expected to begin functioning from 2026. The new collider will reach five to ten times the luminosities (a way to characterize the performance of an accelerator) than any previous CERN experiments.