The policy will provide that charging Electric Vehicles would be a service and not a sale of electricity, which requires a license.

The Centre will soon unveil a policy on  electric vehicles (EVs), Power Minister RK Singh said on 7 March, while launching the National E-Mobility Programme here in line with the government's vision of having 100 percent e-mobility by 2030. 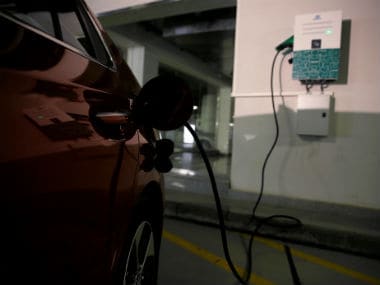 On the occasion, Singh, who is also the New and Renewable Energy Minister, also announced that state-run Energy Efficiency Services Ltd (EESL) will issue a fresh tender on 8 March for procuring an additional 10,000 EVs.

"We will come shortly with a policy, including regulatory framework and technical standards on e-vehicles," the Minister said.

"Besides, we also have a plan for electric vehicle charging infrastructure in the next 15-20 days for setting up charging stations along corridors to be identified."

According to officials, the policy will provide that charging EVs would be a service and not sale of electricity, which requires a licence.

The policy on electric vehicle charging stations on points along identified corridors, draft of which has been finalised by the Central Electricity Authority, would provide that the price of power for charging electric vehicles be capped at the average cost of supply in the state, excluding discom transmission and distribution (T&D) losses, plus 15 percent, officials said.

This would help the tariff for charging at an economical level of below Rs 6 per unit, they added.

The Minister said that EVs make economic sense as their per km running cost is less than a rupee, whereas the same cost for petrol and diesel works out to an average of Rs 6.50.

"It will be a policy framework for distribution companies (discoms) to set up charging stations.

"Industry should note that we are the biggest market for e-vehicles, apart from China, so it makes sense to invest in making cars and batteries, and start early," he added, promising all government assistance in setting up projects.

The governments's National Electric Mobility Mission Plan launched in 2013 aims at gradually ensuring a vehicle population of about 6-7 million electric and hybrid vehicles in India by 2020.

The vision enunciated two years ago is for India to have 100 percent EVs by 2030.

In fact, the second EESL tender for 10,000 EVs going out this week is for double the number of EVs currently plying in the country (5,000).

EESL mostly supplies EVs to the government for its fleet, and Managing Director Saurabh Kumar said that the firm has a demand of 500 electric vehicles in Delhi and has laid out charging infrastructure at 150 locations.

He also said that EESL has signed an agreement with Andhra Pradesh to supply 10,000 electric cars from May onwards and another agreement will be inked with Gujarat next week to supply 8,000 e-cars.

Marc Llistosella appointed Tata Motors MD and CEO; to take over from July 1, 2021

New Tata Safari review: It’s so much better that it’s not the same