The Canon EOS R10 is a great camera for those who want to get serious about vlogging or just want to seriously start pursuing photography. Its main competition, however, isn’t from other cameras, but smartphones.

Entry-level mirrorless cameras, like the Canon EOS R10 represent a conundrum for tech enthusiasts and content creators. On the one hand, they are a befitting successor to entry-level DSLRs like the EOS 550D, or the Nikon D3500, and are a great gateway to get into photography and filmmaking, today. The EOS R10, in particular, is a great way to get started. It would make the perfect first camera for a lot of people today. On the other hand, though, not only is it going up against stalwarts like the Sony A6400, and the Fuji X-T30 II, but also against smartphone cameras. Over the last couple of years, cameras in smartphones have become incredibly capable, especially if creators are only posting online.

So how does the EOS R10 hold up against the best that smartphone cameras have to offer?

The Sensor, Image & Video Quality
First things first, the sensor. Straight off the bat, this is the reason why you should be getting the EOS R10 over any other camera that it competes with, at this price point. The EOS R10 uses a 24.2MP APS-C sensor with a 1.6X crop factor and the DIGIC X image processor which produces some phenomenal results. The EOS R10 has a pretty good dynamic range and is adept at preserving data in the shadows. However, it did have some very slight issues in bringing back the highlights, especially if you blow them badly in the original shot. Nonetheless, you get plenty of room to edit and play around with your photos, if you know what you’re doing.

Low-light performance is not great, but it is good enough. Go beyond ISO 6400 and you’ll start seeing some considerable noise, especially if you try to boost blacks on underexposed shots.

As a stills camera, the EOS R10 can shoot at up to 15 fps in mechanical shutter mode, which is an impressive number. What is even more impressive, is that in electronic mode, it can hit 23 fps. However, you’ll need to beware of rolling shutter, which can skew a few shots here and there, especially if you have a fast-moving subject.

As a video camera, the EOS R10 is in a league of its own. You get extremely sharp, downsampled 4K at 30 fps or less, and cropped video at 60 fps, which may not be as sharp as the 30 fps output, but certainly still usable. For slow motion, it can shoot at 120 fps at 1080p. The video again gets a bit softer, but it looks cinematic. 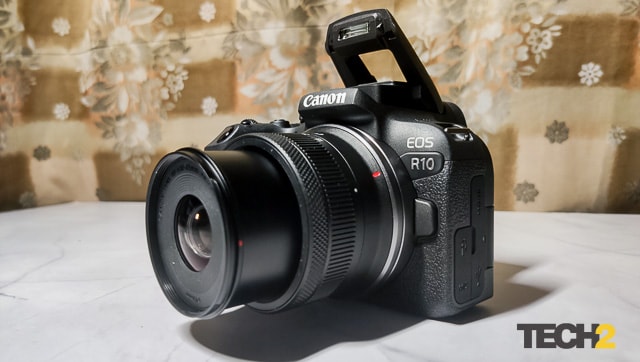 You don’t get a flat C-Log profile so you won’t have that much freedom for colour grading your videos. With the EOS R10, you can use any of the built-in picture profiles for 8-bit 4:2:0 SDR or 10-bit 4:2:2 HDR footage. However, given that this is a camera mainly intended for vloggers and amateur filmmakers, we doubt that anyone using this camera intended to colour grade their videos in the first place. This means that you need to get your exposure and white balance settings spot on before you hit the record button. Again, something that is completely acceptable for a camera at this price point.

Our biggest gripe with the EOS R10 is the lack of in-body stabilization. This can be remedied to a certain extent by using Canon’s IS marked lenses that come with some image stabilisation, or, alternatively by using electronic stabilization. Do keep in mind, that electronic IS adds a significant crop, on top of the 1.6X APS-C crop.

Click here for some unprocessed and uncompressed images from the Canon EOS R10.

The Ergonomics
The Canon EOS R10 has a very compact size, which means if you have small or regular-sized hands, it is fairly easy camera to operate. If, however, you have a large set of hands, the buttons, joystick and screen can be a tad bit challenging to work with. Nonetheless, the EOS R10 has a good grip that suits all sorts of hands, making the camera a lot easier to handle. It makes using the camera very tactile. 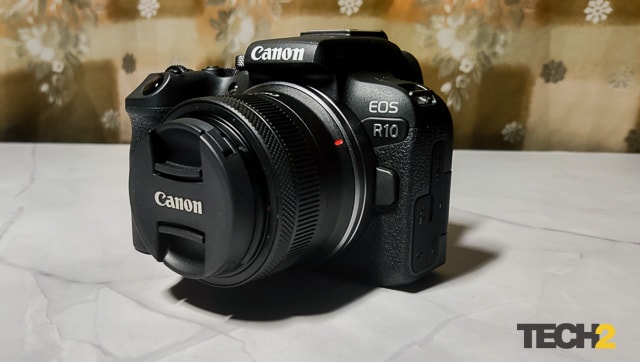 With the battery in place, the body of the EOS R10 weighs just over 420 gm. The included kit lens also weighs very light. As a result, you don’t get the natural stability that you would normally get with a heavier body. The feathered weight of the camera also does not instil confidence in the build quality of the body itself. The upshot, for this, however, is that it is great for vlogging and single-handed use, and your hands do not fatigue that quickly, meaning you can use the camera for longer stretches at a time.

You get a nice slanted shutter button as typical of Canon cameras, a front and rear dial for controlling a couple of different methods of exposure, multi-controller joystick control for moving focus points quickly, and a user-programmable four-way D-pad. There’s also a dedicated AF/MF switch on the front with another programmable button. All the buttons are very easy to reach, and properly tactile. 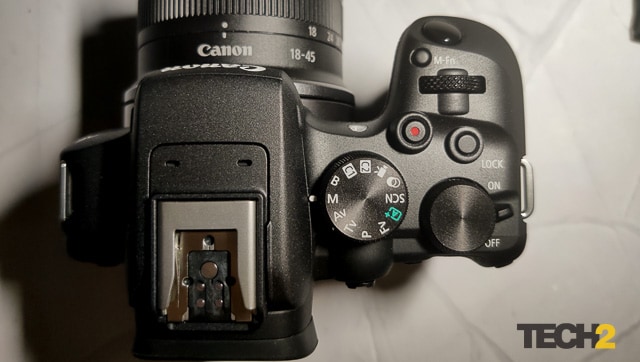 You get a single opening at the bottom of the camera, for your battery and a single UHS-II SD memory card slot. We wish the EOS R10 had dual card slots because data redundancy is important. Also, we would have loved to see a spring on the battery door and some form of weatherproofing. However, given the price of the EOS R10, the lack of a spring on the battery door and weatherproofing are acceptable omissions.

The Autofocus System
This is where the EOS R10 really shines. Canon had struggled a little with their AF systems when they first launched their M series. The EOS R10 is a testament as to how far they have come along. It has Canon’s AI-powered Dual Pixel CMOS II AF system with 651 phase-detection points. What this means is that even under conditions that are far from optimal, it locks focus on quickly, and more importantly, tracks focus brilliantly. It also has subject recognition that helps it focus and track subjects in a much better manner. The autofocus system in this one is responsive, reliable and very easy to use, once you get the hang of it.

The LCD Panel and OLED Viewfinder
The EOS R10 comes with a vari-angle articulating, 3-inch LCD display with touch functionalities. It is quite sharp at 1.04 million dots and has excellent brightness, colour, and viewing angles. It is very usable outdoors, under direct sunlight. Users can tap on the screen to set the point of focus or take a picture. Although people will mostly be using the touch display, Canon has also added an EVF. It isn’t the biggest or sharpest EVF that you will see in a camera at this price point, but it is pretty decent. It has a resolution of 2.4 million dots and a refresh rate of 60 fps, which can be increased to 120 fps without any noticeable drop in resolution. Canon also claims the EOS R10 has a magnification of 0.95x.

Ports and Connectivity
The EOS R10 comes with a USB-C which can be used to charge the battery with a power bank. It also has a micro HDMI port to connect to an external video recorder, a 2.5mm wired remote port, and a 3.5mm microphone input. Users also get a hot shoe to mount accessories and Canon’s range dedicated flashes, called the Canon Speedlite. You also get Bluetooth and WiFi connectivity to share files, as well as the Canon Camera Connect app to connect to Android and iOS devices. Needless to say, all your connectivity needs are well sorted, especially when it comes to recording and monitoring audio.

The Battery Life
The EOS R10 uses the LP-E17 battery. Despite its diminutive size, the battery packs a punch. You can easily have a couple of photo shoot sessions that can last hours or shoot 4K 30fps videos for almost an hour before you need to change the battery. In any case, you should be investing in an additional battery in case you’re planning to use the camera for your vlogging business. Do keep in mind, that using the screen instead of the viewfinder to take photos, and using the wireless connectivity options a lot, drains the battery faster, as is the case with all mirrorless cameras that have those options.

Verdict
To put things simply, the EOS R10 is a great stills camera, and an even better APS-C video camera. In fact, it is better than what most other camera manufacturers have to offer at this price point, in a number of ways. That autofocus system, has no match from any other major manufacturer, at this point.

Sure, there are a few hits and misses. We really believe that Canon should have added IBIS to the EOS R10 and that it should come with two SD card slots. However, at this price point, it is not just competing against other cameras, but against smartphones as well. It certainly is better than smartphone cameras, irrespective of what you put it up against. You get far better videos and images from the EOS R10 than you would from a smartphone. When it comes to photos and videos, software trickery is no match for plain ol’ physics. The advantages of using great quality glass and a much bigger sensor can never be overcome by software trickery.

The problem is the learning curve that comes with using a camera, as opposed to the ease of using a smartphone. Canon and most other camera manufacturers have their work cut out for them in educating new-age content creators and vloggers. I know vloggers who have invested lakhs of rupees on cameras and lenses, who then shoot primarily on their iPhones, simply because of the convenience that it provides.

Regardless of what most new-age content creators choose to do, I for one would definitely bet my money on the EOS R10, and a few fast prime lenses from Canon, if I was to take up vlogging or content creation as a proper profession.