Priced at Rs 2,200, the phone will support 3G connection as well.

State-owned telecom firm BSNL today launched unlimited calling and a data plan for Rs 97 a month for the buyers of Micromax's 4G VoLTE enabled Bharat phone. Priced at Rs 2,200, the phone will support 3G connection as well. "I am glad that BSNL has come with 2 new schemes. This will not only increase BSNL subscribers but also strengthen their financial position. On monthly recharge of Rs 97, BSNL will provide unlimited calling and data on Bharat Phone. I believe that BSNL wi 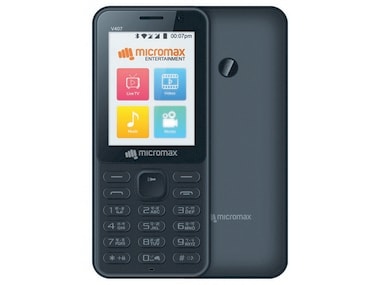 l get a special spot in the ongoing competition in the sector," Telecom Minister Manoj Sinha said while launching the service. BSNL at present provides 3G services and is planning to upgrade it for 4G services from January 2018. "We are proud that we are partnering with Micromax, a home-grown player on the auspicious occasion of Dhanteras. This will connect the unconnected masses in rural area at a very affordable rate. We are in process to start 4G services in January," BSNL CMD Anupam Shrivastava said, while announcing the agreement with Micromax.

At present, only Reliance Jio and Airtel are offering 4G VoLTE (voice long term evolution) services. BSNL, which operates across the country except Delhi and Mumbai, has over 98 million mobile subscribers and 16 million landline customers. Micromax Co-founder Rahul Sharma said that BSNL will provide unlimited calling and data along with free incoming and outgoing calls during roaming, under this partnership.

"The phone will cost Rs 2,200 and its effective price will be cheaper than that of competitors in the market," Sharma said. Built on Googles Android platform, the dual sim Bharat phone has 2.4 inch screen, Qualcomms 4G chipset, 2 megapixel rear camera, VGA camera on the front, 2000 mAH battery, 512 MB RAM and 4G internal memory. It will come preloaded with Facebook, BSNL and Zenga TV (for live television) for watching live television applications.

Sharma said that cost of phone along with bundled service from BSNL is most affordable offering in the market. "After one year of use, the Bharat Phone cost along with monthly coupon of Rs 97 from BSNL will be around Rs 28 expensive compared to the rate of competition but after completion of 2 years it will be cheaper by about Rs 600 compared to competition," Sharma said.

BSNL will offer 4G services in spectrum that it presently uses for 3G services. The company is also working to start 4G services in broadband spectrum that it acquired 2010. The telecom minister also launched online education service of BSNL in partnership with digital content provider Extramarks. "I am announcing that the digital education service will be free for first 15 days," Sinha said.