British lawmakers said last month the country could be put at a competitive disadvantage and the police could lose access to intelligence if the government failed to retain unhindered flows of data.

Britain will set out a plan to co-operate closely with Europe on data protection rules after it leaves the EU, hoping to reassure businesses and law enforcement agencies that there will be no disruption to exchanges of information. 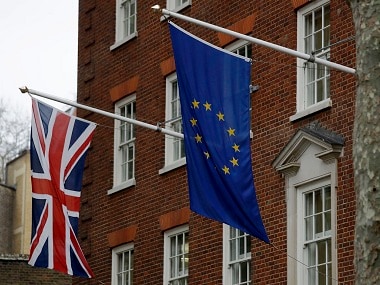 Minister for Digital Matt Hancock said Britain was leading the way on data protection laws and had worked closely with its European Union partners in developing standards.

"We want the secure flow of data to be unhindered in the future as we leave the EU," he said.

"So a strong future data relationship between the UK and EU, based on aligned data protection rules, is in our mutual interest."

In the latest paper looking at its future relationship with the EU, the British government said it would outline on Thursday how it wanted collaboration in data security to continue.

"Our goal is to combine strong privacy rules with a relationship that allows flexibility, to give consumers and businesses certainty in their use of data," Hancock said.

Noting that the digital economy in Britain was worth 118.4 billion pounds ($151.5 billion) in 2015, he said any disruption in the free flow of data could be costly both to Britain and to the remaining members of the bloc.

British lawmakers said last month the country could be put at a competitive disadvantage and the police could lose access to intelligence if the government failed to retain unhindered flows of data.

Britain has published a number of papers this month to try to nudge negotiations with the EU on Brexit forward, tackling subjects such as laws, customs and the border between Ireland and Northern Ireland.