A parliamentary watchdog said in January that Britain had spent 168 million pounds on two failed initiatives to help to fund CCS technology.

Britain will spend one billion pounds to promote electric and other low-emission vehicles, and step up spending on research and innovation, as part of plans to invest 2.5 billion pounds ($3.3 billion) by 2021 to help meet its climate change targets. 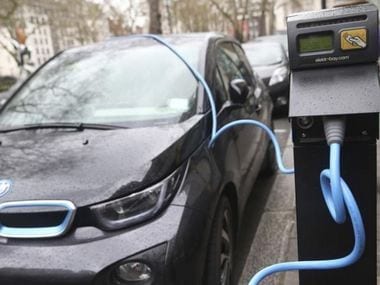 Electric car charging at a station in UK. Reuters

The funding will cover programmes in the energy, transport, agriculture and waste sectors.

The government said it said it would spend one billion pounds “supporting the take-up of ultra low-emission vehicles, including helping consumers to overcome the upfront cost of an electric car,” but gave no details of how the scheme would work.

In July, the government said it would ban the sale of new petrol and diesel cars and vans from 2040.

Britain has a legally binding target to cut greenhouse gas (GHG) emissions, blamed for global warming, by 80 percent by 2050 compared with 1990.

Government data showed by the end of 2016 Britain was more than half way to meeting the target, having cut GHG emissions by 42 percent compared with 1990 levels.

However, with many of the cheaper and easier emission reductions completed, the government said it would “not be easy” to meet its targets.

Britain said it was committed to using a price on carbon dioxide as a means of reducing emissions but said it is yet to determine whether it will remain in Europe’s Emissions Trading System (ETS) when it leave the European Union.

The plan showed the government is keeping faith with attempts to develop technology to collect emissions from power plants and industry and store them underground despite high-profile setbacks.

The government will invest up to 100 million pounds in technology to capture, use and store carbon dioxide emissions and in industrial innovations to drive down emissions, according to the plan published on Thursday.

The British government had viewed carbon capture and storage (CCS) as vital to help it to meet emissions targets, but two competitions over the past 10 years have failed to produce a commercial-scale project.

A parliamentary watchdog said in January that Britain had spent 168 million pounds on two failed initiatives to help to fund CCS technology.

The government confirmed a plan, first announced in 2015, to phase out coal-fired power stations by 2025 unless they are fitted with CCS technology.

The government hopes clean energy projects will be an important driver of growth, adding to the 430,000 jobs it says already exist in British low-carbon businesses. It believes the low carbon economy could grow by 11 percent a year up to 2030.

Business lobby group the CBI welcomed the plan and said it provides clarity for the investment community.

“There remains significant heavy lifting in other parts of the economy, such as heat, transport and improving the efficiency of our homes and industry, and concerted efforts will be needed to ensure we can meet our ambitions,” Neil Carberry, the CBI’s managing director for people and infrastructure, said.