Bragi launches The Headphone and Dash Pro earphones for the Indian market; priced at Rs 12,999 and Rs 27,999 respectively 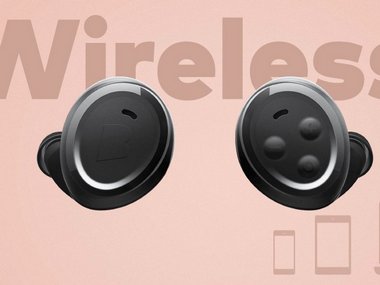 The Headphone by Bragi

The Dash Pro is a premium set of wireless earphones which the company claims has the advanced audio codec with reduced white noise and louder bass thanks to the foam tip. For ease of accessibility, the earphones feature a one-touch access to Google Assistant, Apple's Siri or Windows Cortana.

Another feature present in this earphone is the Knowles balanced armature drivers which claim to provide premium sound in an ultra-small package. The earphones also have 4 GB of onboard storage and can playback music for up to 5 hours on a single charge.

A case comes along the Dash Pro which can be used for charging the earphones. The Versant technology from Knowles filters out noisy environments which enable you to hear your voice clearly while on a call. The Dash Pro can also translate more than 40 languages in real time. The earphones have automatic activity tracking powered by Bragi AI which can track your steps and also give feedback about your exercise performance. The earphones are also IPX7 rated, so they are water resistant and can be used while swimming and measuring laps. The custom Bragi OS allows the user to interact with the headphones using body movements such as a tap on the cheek or a nod of the head. The Bragi OS also allows for the device to become smarter and learn new skills. All of the features present in the Bragi Dash Pro can be accessed by the Bragi App on Apple App Store and Google Play Store.

The Headphone by Bragi features a similar design as that of the Dash Pro but with a much more affordable price tag. The earphones also feature the Knowles balanced armature drivers and Bluetooth 4.0 connectivity as seen on the Dash Pro. However, The Headphone has volume controls present on the earbuds and an audio transparency feature which allows the user to hear ambient sounds without taking out the earphones. The Headphone does not come with the motion tracking, Bragi AI or OS and water resistance that is present in the Dash Pro. Also, there is no onboard storage. The Headphone can, however, provide up to 6 hrs of music playback and can be charged in the same case as provided with the Dash Pro.

IFA 2016: IBM Watson and Bragi come together to make IoT hearables for workplaces

Microsoft is likely to have your Windows 10 Recovery Key: Report