Blue Origin conducts first ever hot-fire test with Blue Engine 4; plans to use it on the New Glenn heavy-lift rocket

Aerospace manufacturer Blue Origin has conducted its very first hot-fire test with the Blue Engine 4 (BE-4). It is powered by liquid oxygen and liquid methane propellants and the company plans on using the engine on its upcoming New Glenn heavy-lift rocket. 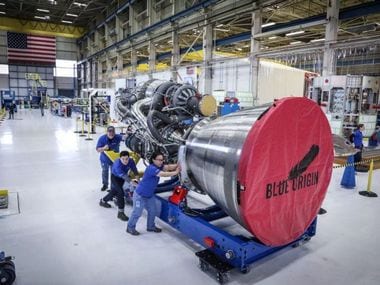 BE-4 engine in a transport cradle.

However, the engine could be used earlier than expected for boosting United Launch Alliance's new flagship rocket, Vulcan. The hot-fire test was at Van Horn, West Texas which is Blue Orgin's testing ground. ArsTechnica reported that the engine reached to about 50 percent of its power in three seconds.

Blue Origin, founded by Amazon CEO Jeff Bezos was initially focused on making a small, suborbital rockets called New Shepard. However, the company plans on using the BE-4 engine for lifting satellites and crew into the low Earth orbit via the Glenn heavy-lift rocket. Blue Origin plans to use the BE-4 on the rocket by 2020.

First hotfire of our BE-4 engine is a success #GradatimFerociter pic.twitter.com/xuotdzfDjF

ULA's plan to use BE-4 engine has surprised Aerojet Rocketdyne who have been responsible for manufacturing nearly all the significant rocket engines like the F-1 which was used in the Saturn V rocket.

This news comes after Bigelow Aerospace entered into an agreement with United Launch Alliance (ULA) to launch the expandable module B330 on ULA's Vulcan launch vehicle. The module B330 is a standalone commercial space station that can operate in low Earth orbit, cislunar space and beyond. Bigelow Aerospace said it is developing two B330 commercial space station habitats that will be ready for launch any time after 2020.