A Blockchain-based Aadhaar would ensure that records are difficult to tamper with and are more secure.

Aadhaar, a brainchild of the Indian Government, provides a 12-digit numeric code to its citizens for an unforgeable identity. Backed with 10 fingerprints and facial biometrics, it is the identity layer of a large ecosystem that can be built around it to solve real-world problems. Till date, more than 1.19 billion personally identifiable information (PII) records are stored and managed centrally by the government. The question arises that how can this massive data be used to solve real-world problems? Can we solve the taxation problem, problems in government subsidies distribution, etc.?

The central government is pushing citizens to link their Aadhaar number with a host of services, including bank accounts, mobile phone connections, welfare schemes, Employee Provident Fund, etc. However, the Supreme Court has now extended indefinitely the 31 March deadline for mandatory linking of Aadhaar with bank accounts and mobile phones.

Since its inception, Aadhaar has been criticised as a project encompassing ample scope for forgery and fraud.

How can Blockchain help?

The blockchain is a distributed shared peer-to-peer ledger, like a spreadsheet that can record any transaction. In Blockchain, a ledger gets created on entering an individual’s biometric and demographic details. A copy of the same ledger shall be shared between all stakeholders, specifically government departments and private entities requiring Aadhaar linking. Any transaction pertaining to an individual, such as transfer of subsidy, initiation of any new subsidy, stoppage or termination in case of demise etc. shall be recorded with no one having the capability to tamper the data. Any update on the data shall be visible to all related parties instantly. In addition, all updated changes would be visible to everyone without involving an intermediary. If someone tries to cheat the system, the other record keepers can detect it.

Getting the right data at the right time without relying on any single data provider is the motive behind Blockchain adoption. Blockchain is an immutable shared ledger. Data could be created and read but it cannot be updated or deleted.

Since the data stored in the Blockchain is securely encoded, no plain data can be simply retrieved from the underlying ledger until the given user has required permission and entitlement to get the data. Owner of the data can retrieve it by using secure credentials only. Therefore, it can be almost 100 percent safe.

Let us analyse one use case to solve the problem of fair distribution of government subsidies by linking Aadhaar data without compromising on data privacy and data security. 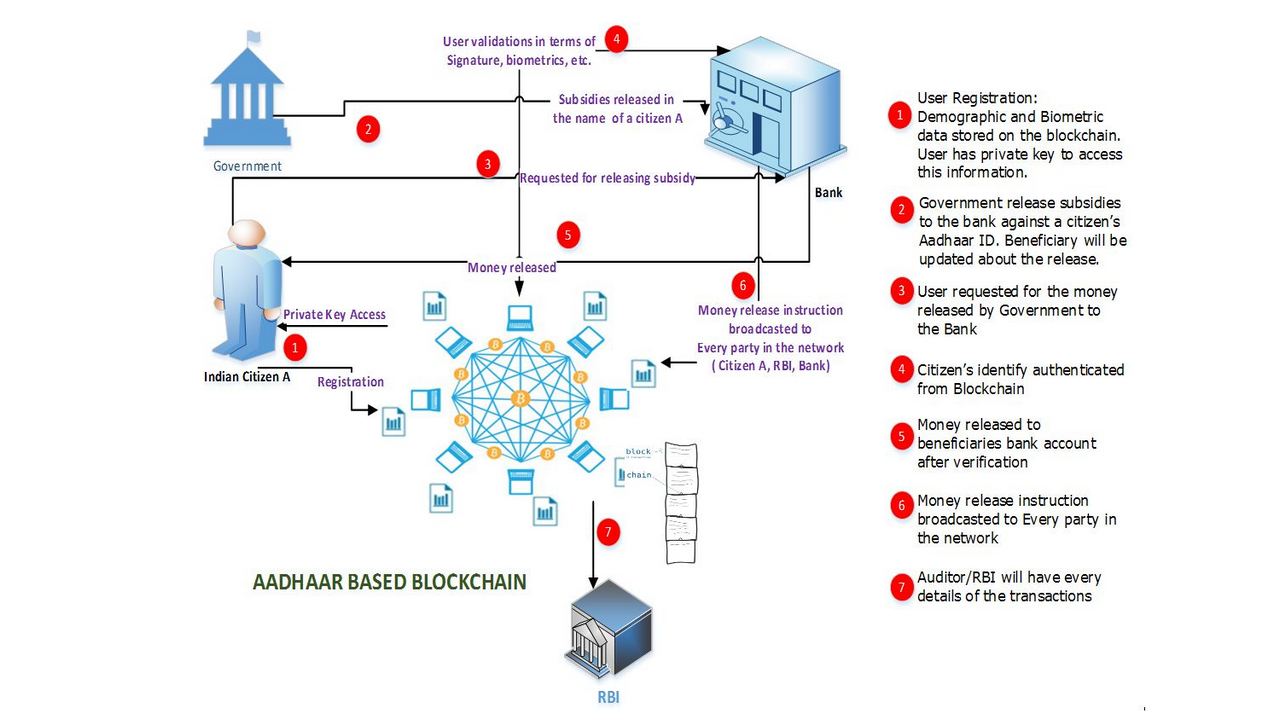 Simultaneously it will be broadcasted to the other parties on the network. Therefore, the beneficiary will be intimated about the disbursement and will approach the bank for withdrawal of the amount.

Before disbursement of the subsidy amount to the claimant, the bank will validate the requestor’s identity from the Blockchain. Once the PII information matches between the claimer details and the data shared by government, subsidy amount would be disbursed by the bank.

After disbursement, the bank updates the same in the ledger to provide a transparent record of the transaction for auditors. This way it would ensure that the subsidies reach the right people directly within the right amount of time. In this case, peer-to-peer network approval works and is a classic example of how data can be updated and the same is relayed to the user. The system has a consensus algorithm, which runs on a distributed network, and provides a tamper-free environment for the participants for any transaction.

While Blockchain is firmly footed to play a transformational role in determining the future, it is also important to note that Blockchain technology is not yet fully explored. This can prove to be a challenge for a Blockchain-based Aadhaar, as developing smart contracts covering the complex rules for authentication and record keeping of digital transactions may not be straightforward. The performance may also be a little slow, as we need to keep multiple identical data stores.

The author is a manager at Sapient Consulting