Ofo users are clamoring for their deposits to be returned and the firm’s founder has admitted considering bankruptcy.

On the sidewalks of Shanghai and Beijing, once bright-yellow Ofo bicycles lie in varying states of disrepair - chains unhooked, wheels buckled and paint starting to fade - reflecting the quick rise and sharp fall of the Chinese bike-sharing startup. 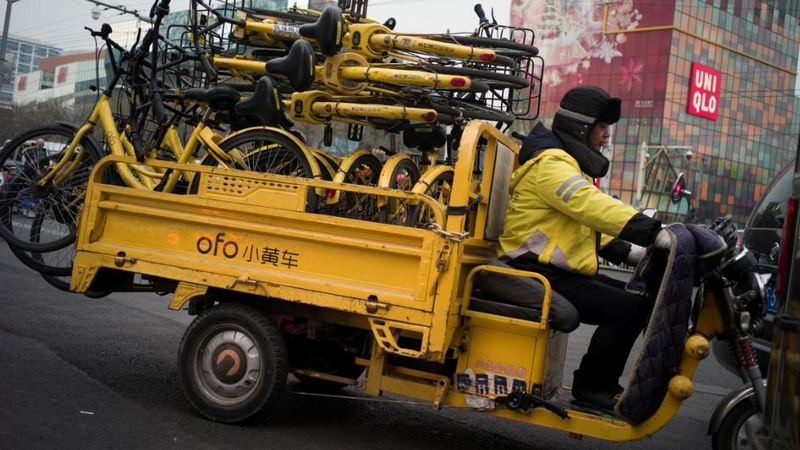 Millions of Ofo users are clamoring for their deposits to be returned and the firm’s founder has admitted considering bankruptcy.

Ofo’s plight is a warning for China’s tech investors, who have plowed tens of billions of dollars into loss-making businesses such as bike sharing, ride hailing and food delivery. Not long ago, Ofo was racing into markets overseas and raising billions from backers including Alibaba Group Holding Ltd (BABA.N) and Didi Chuxing.

“It now appears bike sharing is the stupidest business, but the smartest brains of China all tried to get in,” Wu Shenghua, founder of now bankrupted bike-sharing company 3Vbike, told Reuters. “It really now seems ridiculous.”

Ofo was a phenomenon. Its dock-less bicycles, which could be picked up by scanning a QR code and left anywhere, grew from Beijing campuses to become an icon of young, urban cool. The firm garnered a valuation of $2 billion.

Its bicycles - and those of main rival Mobike - could be found on almost every city street corner, often in staggering numbers. Ofo’s advertisements featured major Chinese popstars and showed trendy youngsters pedaling around the hippest areas of town.

Dozens of smaller rivals emerged in China over the last two years, only to go out of business, leaving Ofo, fellow Alibaba-backed Hellobike, and Mobike, backed by Chinese social media and gaming giant Tencent Holdings (0700.HK), as the major players.

But costly battles for market share have meant Ofo and its rivals have struggled to turn popularity into profit. Ofo’s very survival is now at risk as debts to suppliers have come due and user demands for deposits have mounted.

“It’s a very tricky business, all the profits are eaten away by competition. It’s something that really needs to be part of a bigger business,” said Maxwell Zhou, founder of tech startup metaapp.cn and a former employee of Mobike in China.

“It’s very similar to email in that way. It has a lot of benefits for society, but none of the email providers were able to create a barrier to entry, so anybody could host emails, and eventually nobody could make any money.”

At its peak, Ofo had bike fleets in more than 20 countries, from France to Australia and the United States. Company insiders, however, said it tried to grow too fast, and found itself facing a wide array of hurdles, from traffic regulations to vandalism, as well as spiraling costs.

“In retrospect of course there was problem with management, and we were expanding too rapidly,” said a former Ofo executive who worked on international expansion, asking not to be named.

The firm has pulled back from markets like Israel, Germany and the United States, and has been forced to sell assets, including some bikes for as little as $2, the person said.

Ofo and Alibaba did not respond to requests for comment.

The former executive pointed to an unsuccessful push into Japan, where the firm had looked to expand in a partnership with SoftBank Group Corp (9984.T). That plan went sour after a breakdown in takeover talks with SoftBank-backed Didi Chuxing, said the executive.

With bikes sitting in storage, fees piled up. “We lost a lot of money, and now the bikes are still stuck in warehouses,” said the executive.

Didi declined to comment but pointed to earlier statements saying it had never intended to buy Ofo and promised to keep supporting its “independent development” in the future.

In China, once-loyal users have turned on Ofo, lining up at its offices in Beijing to demand the return of deposits paid up-front to use the service. Over 12 million people have so far requested repayment online.

Jiang Zhe, 21, a university student in Beijing, said he usually bought a month pass for Ofo bikes, but has lately struggled because so many are broken. “I haven’t used Ofo recently because I can’t find any working bikes,” he said.

He is now one of the many seeking a refund.

In a letter to employees last week, Ofo CEO Dai Wei said the company was struggling to resolve a cash shortage, in part because of user refunds as well as payments to suppliers. He said the firm was battling on amid “pain and hopelessness”.

A court in Beijing has placed Dai on a credit blacklist that restricts him from going to fancy hotels, traveling first class or sending his children to expensive schools, according to the court’s Dec. 4 order seen by Reuters.

The rare near-implosion of a wildly popular and innovative firm in China has spooked some authorities. The transportation ministry said on Friday it was asking Ofo to optimize its refund procedure, but also called on the public to be more “tolerant” to allow domestic innovation to thrive.

Many weren’t convinced, including the former Ofo executive.

“It would be tough for the company to get back to its golden days, I don’t think it can be like before. I think most people are really just waiting for the final days,” he said.