Social media platforms are mounting a vigorous campaign against misinformation before the general elections.

Facebook is opening up a war room to quickly respond to election hoaxes. Twitter is banning political ads. Google plans to crack down on bogus videos on YouTube.

Social media platforms say they are mounting a vigorous campaign against misinformation in the lead up to next month’s general election in the United Kingdom. But digital misinformation experts believe British voters remain vulnerable to the same type of misleading ads and phony claims that played a role in the vote to leave the European Union three years ago. 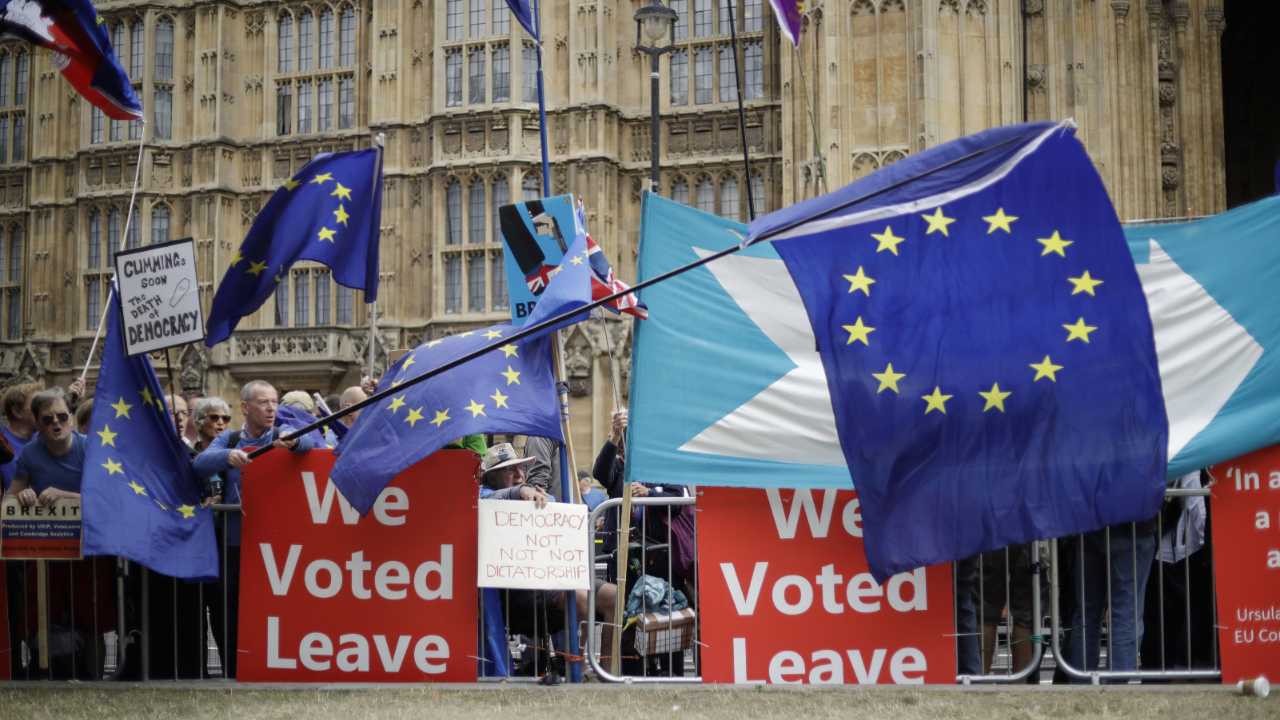 Leave and remain supporters try to block each others' banners as they protest opposite Parliament Square in London. Internet companies say they’re working to fight misinformation ahead of next month’s general election in the United Kingdom, but bogus online claims and misleading political ads remain a threat due to government inaction. Image: AP

Government inaction on online misinformation and digital ad regulations have added to the pressure internet companies are under as they face growing criticism for amplifying false claims during the run-up to the 2016 Brexit referendum and the 2016 election in the U.S.

Prime Minister Boris Johnson pushed for the snap Dec. 12 election, in which voters will choose 650 representatives to the House of Commons, hoping his Conservative Party will gain enough seats to break a stalemate over his plan to take Britain out of the EU.

And with campaigns barely underway, falsehoods are already spreading online.

A video posted this week on Twitter and Facebook by the Conservative Party contains a misleading edit of a television interview with a senior Labour Party figure. The video had been altered to show the official failing to answer a question about Brexit, when, in fact, he responded quickly.

The chairman of the Conservative Party called the doctored video lighthearted satire, but it’s part of a serious problem confronting British voters, according to Will Moy, chief executive at Full Fact, an independent, London-based fact-checking organization.

“The biggest risk to people in the U.K. right now is being lied to by their own politicians,” said Moy, whose organization works with Facebook and others as a third-party fact-checker, as does The Associated Press. He said laws written decades ago to cover political advertising for print, radio, and television can’t be applied to the reach and speed of the internet.

The public debate surrounding the 2016 Brexit vote was driven in part by a number of false claims. They included promises that Britain could recoup 350 million pounds per week by leaving the EU — an unfounded claim that a survey later found was believed by nearly half of all Britons.

The threat has grown alongside the influence of social media and the proliferation of online political ads. The proportion of campaign spending on digital advertising has increased from 0.3% in 2011 to 42.8% in 2017, according to the U.K.’s Electoral Commission.

The 2016 U.S. presidential election and the Brexit referendum also highlighted concerns about online foreign interference, after allegations that Russia tried to use social media to divide Americans into hot-button topics like race and religion. A similar tactic may have been used ahead of the Brexit vote: A 2017 study by the University of California Berkeley and Swansea University in Wales found more than 150,000 Twitter accounts with ties to the Kremlin that dispersed messages both supportive and critical of Brexit. Russia has repeatedly denied meddling in the election.

Despite reports urging new regulations designed to combat misinformation or regulate the way digital ads are targeted at voters, officials in Britain have made no significant changes to laws governing online ads, social media, and election disinformation.

The U.K. election will be among the first since the start of Twitter’s new policy prohibiting paid political advertisements, which takes effect Nov. 22. The move was hailed by some as an important step in reducing election misinformation, though critics said it was overly broad and questioned its significance, given Twitter’s relatively modest number of political ads.

“We believe political message reach should be earned and not bought,” Twitter CEO Jack Dorsey tweeted.

Twitter’s ban stands in stark contrast to Facebook’s policy of not fact-checking ads from politicians and allowing demonstrably false ads to remain up.

This week a group of 10 U.K.-based technology researchers, transparency advocates, and non-profit tech organizations called on Facebook and Google, which operates YouTube, to follow Twitter’s lead.

Despite the criticism, Facebook’s leaders insist they understand the stakes and take the threat of misinformation seriously.

“We have learned the lessons of 2016 when Russia used Facebook to spread division and misinformation in the U.S. presidential election,” Richard Allan, Facebook’s vice president of policy solutions, wrote in a piece published last month in The Telegraph.

With 42 million users in Britain, Facebook has the largest social media reach in the U.K. and has faced the most scrutiny for its role in spreading false information ahead of the Brexit vote. Facebook also owns Instagram and WhatsApp.

Last year, the company began requiring political ads in Britain to carry a disclaimer explaining who paid for it. Political ads are also archived in a public database that includes information such as the age of people targeted by the ad and how much money was spent on it.

Other changes include a ban on political ads that discourage voting, and the launch of an operations center to find and remove hoaxes and misinformation related to the U.K. election.

Following an 18-month investigation into online privacy and the use of social media to spread disinformation, an influential parliamentary committee in February urged the government to urgently approve new laws to address internet campaign techniques, insisting that democracy itself was under threat.

The Electoral Commission offered its own proposals, including banners on digital political ads clearly identifying their sponsor and increased fines for campaigns that violate the rules.

None of the recommendations have been approved.

“There’s been absolutely no response to the recommendations,” said Susan Banducci, a political scientist at the University of Exeter who studies the impact that social media plays on elections. “We know there’s a problem. You’ve got to wonder why governments are unwilling to take action.”