Bhutan is boosting its economy and development through happiness and mindfulness

“How can human values and the needs of business, work together to create prosperous and civilised societies?”

What is your country’s GDP (Gross Domestic Product)?
Does it in any way define how your country is progressing?
How do you know if its people are really happy?
Is economic growth alone, the single source indicator of people's happiness?

If advancement (in the materialistic sense) and economic development led to happiness, the most developed countries should also be the happiest. Yet, we’ve found that this isn’t necessarily true.

New-age economists are constantly juggling “GDP” and its relationship to happiness. Since happiness is a transient, finite emotion, it is challenging to measure in analysis, using numbers. Moreover, when we capture happiness, it needs to be in contrast with some base level.

Scottish scholar Adam Smith, also referred to as the Father of Modern Economics and among the most important thinkers in the field, raised an important question, one as relevant today as it ever was: “How can human values and the needs of business, work together to create prosperous and civilised societies?”

Happiness… as ancient wisdom defines it

In ancient Hindu scripture, happiness is referred to as “ananada” or “sukh” which translated to joy, a state of bliss and satisfaction, which can be achieved in three forms.

Bhautik, or materialistic, which develops from physical and material achievements and comforts of life
Mansik, meaning mental, emotional or psychological, which arises from a sense of freedom from worries, afflictions, fear and anxieties. It also comes with attaining success, power and position, name and fame, getting acknowledged or recognised, respected and loved. 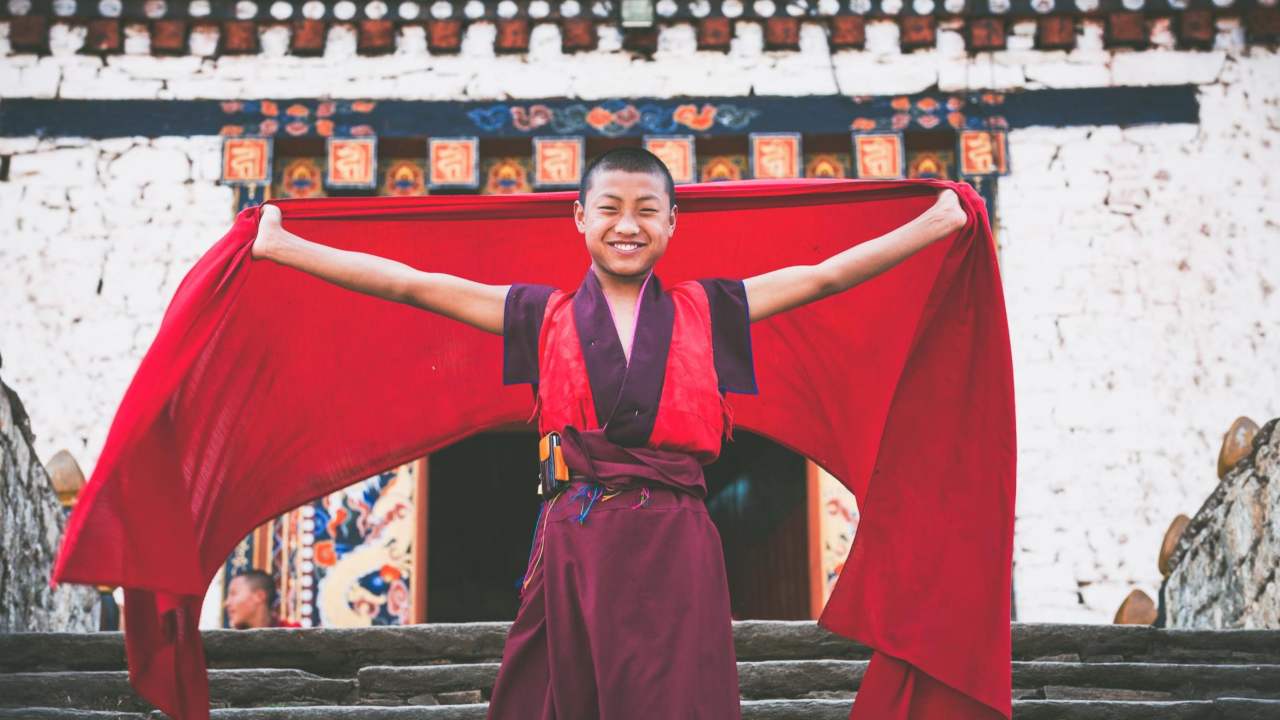 Bhutan is in pursuit of happiness.

Adhyatamik, meaning spiritual. This kind of joy arises from serenity of one’s own mind, in finding peace and purpose, helping other people, the environment and society. It also come with attaining deeper self-awareness and spiritual knowledge.

(Also read: How Japanese concepts of IKIGAI, mindfulness can make our lives wholesome and rewarding)

Understanding this, social scientists have looked into various measures to capture this state such as individual and social well-being, life satisfaction, freedom, sense of belonging, self-worth and sense of security, to name a few. But throughout history, there are examples in ancient wisdom that this is not a modern quest.

Bhutan and its “pursuit of happiness”

Very early in his life and monarchy, the young king of the Himalayan kingdom of Bhutan understood this well. He questioned the prevalent economic growth indices system and strongly opposed the notion that GDP alone could deliver happiness and wellbeing to society.

In 1970, King Jigme Singye Wangchuck, the fourth king of Bhutan, a teenager wise beyond his years, believed that individual happiness is indicated by growth and signs of progressive development of his people. On a trip to India in 1972, he was interviewed by a journalist at the Bombay airport, and he announced the term “Gross National Happiness” (GNH), as a holistic and sustainable approach to development.

The term symbolizes the importance of sustainable development with a holistic approach towards the concept of growth and progress, with an equal importance to non-economic aspects of wellbeing.

The concept of happiness isn’t new to this mountain kingdom, if we went by Bhutan’s legal code in 1629. It stated that, “If the government cannot create happiness for its people, then there is no purpose for government to exist.”

The Code stressed on laws to promote happiness for all living beings – not through economic progress of Bhutan, but by creating a flourishing human society living in harmony with nature.

Bhutan – a living example of a mindful nation

Who wouldn’t like to live in a country which has 78 percent of its land under forests, and is one of the happiest places on the planet?

Bhutan, where 92 percent of the population reported happy, is regarded as one of the most peaceful places on Earth – free of terrorism, riots, social, religious or communal hatred, racial biases, and prejudices or any kind of discrimination or domination by powerful. With pristine and beautiful nature, rivers and streams pure enough to drink water from them directly, Bhutan is also the only carbon-negative country in the world.

Bhutan is a land where ruler loves his people and is determined for their realistic development. Healthcare, education and public services are free, human life and values are safe, and people live in harmony with nature and culture.

Wisdom and the environment are still frozen in time in Bhutan.

This is perhaps because the yardstick for progress and development in the country is GNH, and not GDP like every other nation in the world. 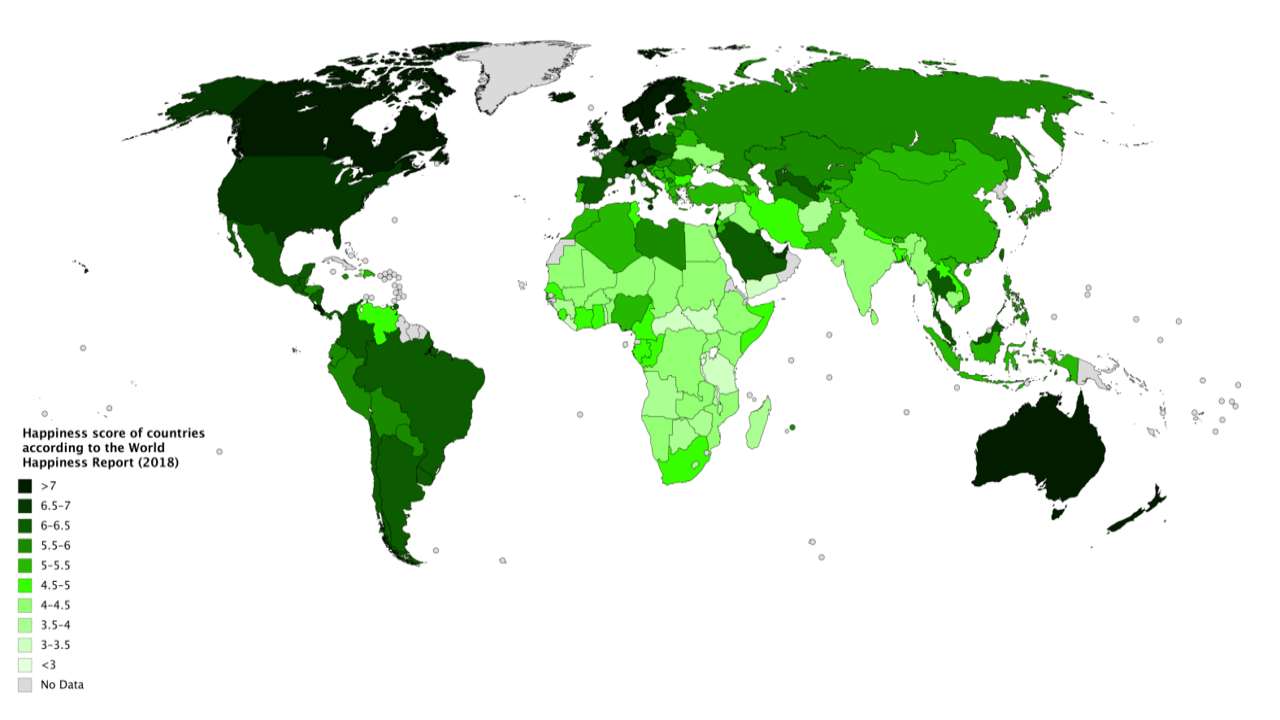 Happiness score of countries according to the World Happiness Report 2018. Image: Wikimedia Commons

Over the years, world leaders and economists have developed a dogmatic neurosis on GDP as a measure of progress. National policies revolved around means to boost GDP and very little attention is given towards genuine environmental and socio-economic wellbeing and standard of living. Today there is a lot of research that shows that wealth alone does not contribute to life satisfaction or happiness.

Researchers and economists were always on the lookout for how human satisfaction and happiness can be identified and measured. In any economy, there is a need to measure these factors to drive policies towards a more holistic and realistic benchmark for development. With the introduction of term GNH, Bhutan has sparked a debate on what real human development truly is.

(Also read: Mindfulness is not just about meditation, but has proven scientific benefits)

Today, Bhutan is considered a living example where GNH reflects their understanding of human development and happiness. Measuring this progress indicator is extremely important for the holistic development of a society. Now, this small Kingdom of Bhutan is showing the world, the power and value of equal and harmonious society. Their constitution stipulates "the State shall strive to promote those conditions that will enable the pursuit of Gross National Happiness.”

The core of GNH was based on its 4 primary pillars:

To cultivate widespread understanding and holistic coverage, the range of pillars was expanded to nine domains:

With this broadening of scope, Bhutan's GNH Index today examines both socio-economic attributes like living standards, health, and education and non-traditional areas of culture and psychological wellbeing. It has now become a holistic scale of the general wellbeing of Bhutanese people rather than a subjective psychological ranking of ‘happiness’ alone.

A key takeaway from the GNH Index is respect for not only human materialistic progress. It also acknowledges a thriving society and well-rounded wellbeing of the nation. A timeline of Gross National Happiness growing in acceptance.

Recently, in my interview with former Cabinet Minister Lyonpo Norbu Wangchuk (who served as Minister of Economic Affairs and later as Minister of Education from 2013 to 2018), he said, “GDP based progress model contributed to world economies for some time but now we also are getting clear evidence and signs from Bhutan’s GNH initiative that the old model of GDP is broken.”

He shared Bhutan’s GNH model of the last few decades where they don’t strive for unsustainable material pursuit but reinforce holistic development through respecting nature, ecosystem and balancing with inclusive human aspects of life, family, community and social development.

Bhutan's approach to GNH is radically different from the global general approach to measuring a country’s progress on levels of happiness of its people.

United Nations Ex-General Secretary Ban Ki-Moon appreciated the Bhutanese government's efforts in initiating a debate on the link between happiness, well-being and prosperity and paving the way through its labors. The UN's sustainable growth panel noted that while material prosperity is important, it is far from being the only determinant of wellbeing.

All major policies created in Bhutan consider in view their impact on the country’s Gross National Happiness. The policies take into account equality, family integrity, health, gender equity, and satisfying jobs, among other things. A positive effect of such policies are leading to the foundation of a safe and supportive community where trustworthiness of the people is high, and fear of victimization by other human beings is ideally non- existent.

Mindfulness and happiness from Bhutan

Mindfulness along with focus and agility promotes kindness, compassion, joy, equanimity, peace of mind, wisdom, and contentment which are the important ingredient for human happiness and progress.

Taking GNH to next level Bhutan is now they are introducing Mindfulness and Emotional Intelligence Meditation to all the schools and government institutions. They feel it is one of the best ways to harness human potential and cultivating realistic happiness.

Bhutan Honourable Minister Lyonpo Norbu Wangchuk acknowledges the power of Mindfulness as one of the ways to find and fulfill the happiness of Bhutanese people. Through practices of Mindfulness Meditation they are training teachers, government officials and creating a culture of compassion and empathy for all its people. In his belief, through a change with educators and government officials, a culture of happiness and well-being can be reinforced.

The Honourable Minister is coming to India to share his experience and knowledge at Mindfulness India Summit 2019. He will talk about bringing happiness and wellbeing in our daily life, education, communities, society and nation and learn ways to improve environmental, political, educational and organisation degradation.

It is my humble and earnest request to all governments of nations and my fellow humans to make GNH base for human happiness and implement this mindful approach to shift the culture in prosocial and compassionate direction to foster appreciation of human diversity and common humanity while pursuing social and economic goals.

The author is the founder of Mindfulness India Summit, Mindful Science Centre and Beyond Mind Learning.

This Pride Month, watch these multifaceted and enlightening stories that go beyond tokenism

Book review: ‘What’s a Lemon Squeezer Doing in My Vagina’ is a harrowing tale of infertility treatment in India