In 2008, the Guardian predicted that then President-elect Barack Obama would be the worlds first "Internet President". The way in which Obama utilized email lists, social media and discussion forums to galvanize both support and contributions for his campaign, was unprecedented. It was also largely instrumental in capturing the imagination (and votes) of a largely apolitical American youth. 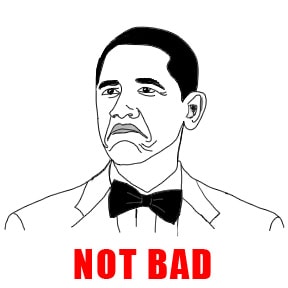 Three years later Obama's overwhelming popularity may have taken a few hits, but his Internet presence has not. Not only is his Twitter feed and Facebook profile extremely popular, he is also a favorite subject of video editing, image altering, wisecracking Internet youth, who have him doing all manner of things from kicking down doors to be "a boss", to toppling podiums after lashing out at the Republicans and doing multiple back flips after announcing the death of Osama Bin Laden. Then there is also the famous Obama "rage face" , better known as the "Not bad" icon - which is widely used on Internet forums.

These are a few of the funnier, better done videos/memes available online right now:

2. Opening doors is too mainstream - Presidents kick them down

This one is so good, you can barely tell its edited.

4. Obama does a Fresh prince of Bel-Air handshake

5. Obama gets the Senate rocking thanks to a stirring speech on unemployment and autotune