Obama recently appeared on Netflix as the first invitee on David Letterman's new interview series, “My Next Guest Needs No Introduction”.

The New York Times reported that Barack and Michelle Obama are in the process of negotiations with streaming giant Netflix to produce content for the streaming platform. 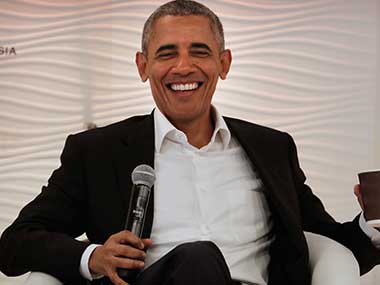 Former US president Barack Obama laughs after answering a question during a leadership summit in New Delhi. AP

The former presidential couple might take on the roles of producer or even moderate shows. No details of the proposed content, which would be exclusive to Netflix, are available yet. Sources told the Times that it might focus on highlighting inspirational stories and issues close to the Obamas' hearts such as nutrition and healthcare.

Barack Obama recently appeared on Netflix as the first invitee on David Letterman's new interview series, “My Next Guest Needs No Introduction”.

Barack and Michelle Obama recently also signed a joint book deal reportedly worth as much as $60 million with Penguin Random House. Teaming up with Netflix would provide them with a platform to reach over 55 million Americans and 117 million global subscribers.