By David Shepardson NEW YORK (Reuters) - Demand for electric vehicles remains low in the U.S. market, but industry executives at the New York auto show this week said they are pushing ahead with billions of dollars in investments even while preaching patience. Officials said their companies are charging ahead with a flurry of new electric vehicle (EV) models, citing rising regulatory requirements globally. 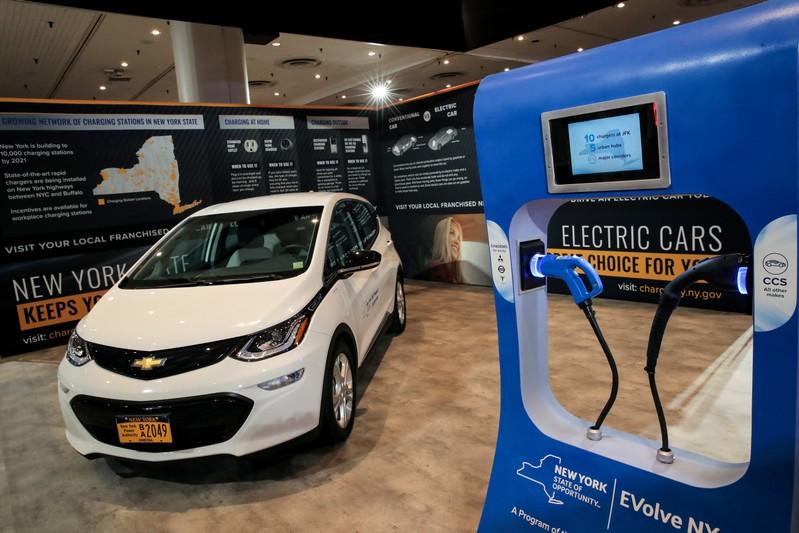 NEW YORK (Reuters) - Demand for electric vehicles remains low in the U.S. market, but industry executives at the New York auto show this week said they are pushing ahead with billions of dollars in investments even while preaching patience.

Last year, only about 2 percent of U.S. auto sales were comprised of full electric or plug-electric hybrid models, with Tesla Inc accounting for more than a third of those sales. The United States ranks seventh in EV sales as a percentage of overall sales, according to the International Energy Agency.

"It's going to be a pretty long runway," Krebs said, adding EV sales may first rise dramatically in government and corporate fleets.

Daimler AG showed a new Mercedes-Benz SUV called the EQC Edition 1886 that will go on sale next year "and then we have a whole lot of other electrics coming over the next couple of years," said Dietmar Exler, who heads Mercedes-Benz USA.

Jaguar Land Rover began selling its electric Jaguar I-PACE, in late 2018 in the United States and is selling only about 200 a month. "It will be a long, long time until we see mass adoption," said Joe Eberhardt, who heads the company's North American unit.

There are nearly 300 million gasoline-powered vehicles on U.S. roads, Eberhardt said. "Nobody is going to drive them into the ocean."

He noted the economic advantages of EVs are slight at current gasoline prices. He suggested an I-PACE owner would on average save about $500 a year by using electricity rather than using fuel, but they will also save on maintenance costs.

Germany's Volkswagen AG and its Audi unit are introducing a half-dozen new electric vehicles in the coming two years and have aggressive volume targets, aiming to have 20 to 30 percent of its sales as EVs by 2025.

As part of VW's $25 billion "dieselgate" settlement, the German automaker agreed to add at least three additional electric vehicles, including an SUV, in California by 2020.

Volkswagen U.S. chief Scott Keogh said the company, which showed off a concept ID Buggy EV, is investing in EVs not as a "guilt play" to address its prior diesel issues but to make money.

Keogh says there will be a flurry of launches in the next three years but it will still be a few years beyond that. "I think 2025 is where you're really going to see - is it taking hold?" Keogh said.

Audi said this week it plans to start delivering its new electric E-Tron SUV to U.S. consumers next month. It has just delivered test vehicles to its 300 dealers, said Mark Del Rosso, president of Audi of America, noting that many people who reserved an E-Tron are new to the Audi brand.

OPEC+ sticks to plan to ease supply cuts through July