The Toyota sedan will be placed between Etios and the Corolla and will compete with Hyundai Verna, the Honda City and the Maruti Suzuki Ciaz.

India's motoring trade show Auto Expo 2018 is about to start in few days and companies have started teasing vehicles to be showcased during the event.

Toyota has teased a sedan which is expected to be the Indian Asia-spec Toyota Yaris. 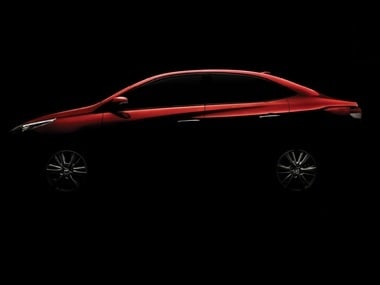 The company has teased a picture which shows the silhouette of the top portion of the car. According to a report on Overdrive the company was expected to enter the C segment with Toyota Vios sedan but now its clear that it will come as Toyota Yaris in India.

The teased picture shows sleek headlights, taillights, wide grille and pinched roof-line. The interior comes with a 7-inch touchscreen infotainment unit, 4.2-inch MID and analogue clocks. Bolstered steering and sleek air-conditioning vents have been spotted on the sedan. An all-black layout of the cabin is also expected on the Indian version of the Toyota Yaris.

It is expected to come in two variants a 1.5 L petrol engine and a 1.4 L diesel engine. The petrol variant of the India bound sedan is expected to be based on the 2NR-FE motor, same as seen on Etios sedan. It is going to vary in terms of valve timing on intake and exhaust port, the website reported.

The Toyota Yaris engine is expected to produce 107 PS and 140 Nm of torque. According to Overdrive, the diesel variant of the sedan will be exclusive to India and will borrow the 1.4 L D-4D drive-train from the Corolla.

It will deliver 90 PS of power and 205 Nm of torque, same as seen on Toyota Corolla.

The price of the sedan is expected to be placed between Etios and the Corolla. Yaris will compete with Hyundai Verna, the Honda City and the Maruti Suzuki Ciaz.

Auto Expo 2018: The Toyota Yaris sedan will arrive in May with a 1.5-litre engine in CVT and MT variants

Auto Expo 2018: Toyota to bring global-spec models to India in its bid to catch up with Maruti and Hyundai