The all-electric Audi Q4 e-tron sits between the traditionally powered Audi Q3 and Q5 in the line-up. The Audi Q4 e-tron - with its 77kWh battery - has a WLTP-certified range of 520 kilometres. Image: Audi

The smaller battery has 52 kWh of usable capacity while the larger one increases this to 77 kWh. Uniquely for an Audi, the Q4 35 e-tron and the Q4 40 e-tron variants are propelled by a single electric motor in the rear axle. The base version males 170 hp from the smaller battery pack while the Q4 40 e-tron makes 204 hp. Both make 310 Nm but the 35 can get from 0 to 100 kph in nine seconds while the 40 does this in 8.5 seconds. This mid-spec version with the larger battery pack is also the best in terms of range, managing 520 km (WLTP) on a full charge. The Q4 35 e-tron has a 349-kilometre range for the Sportback version (341 kilometres for the standard version). The range-topper is the Q4 50 e-tron quattro which adds another electric motor on the front axle for AWD capabilities. This makes 299 hp and 460 Nm, getting from 0 to 100 kph in 6.2 seconds and reach a 180 kph top speed. Ranges are 488 kilometres and 497 kilometres for the Sportback. The front motor is only called upon when added power is needed or when there isn't enough traction. A heat pump is also available optionally to improve efficiency. The Q4 e-tron twins can charge at up to 125 kW with the larger battery, which adds 130 kilometres of range in 10 minutes.

The 2021 Audi Q4 e-tron twins follow Audi's new EV design direction, debuting in the Audi e-tron GT flagship. There is a new interpretation of the Audi grille, which is now blanked out and finished in a contrasting shade. Other traits that have been possible with the EV architecture are the long wheelbase, short overhang and large wheels of 19 and 20-inch sizes. The bodywork has been tightened up with significantly more pronounced creases and smoother cuts. Another striking trait is the dropping roofline, more pronounced in the Sportback. The Audi USP of striking light signatures remains here as well, the highlight being the full-width tail-lights. 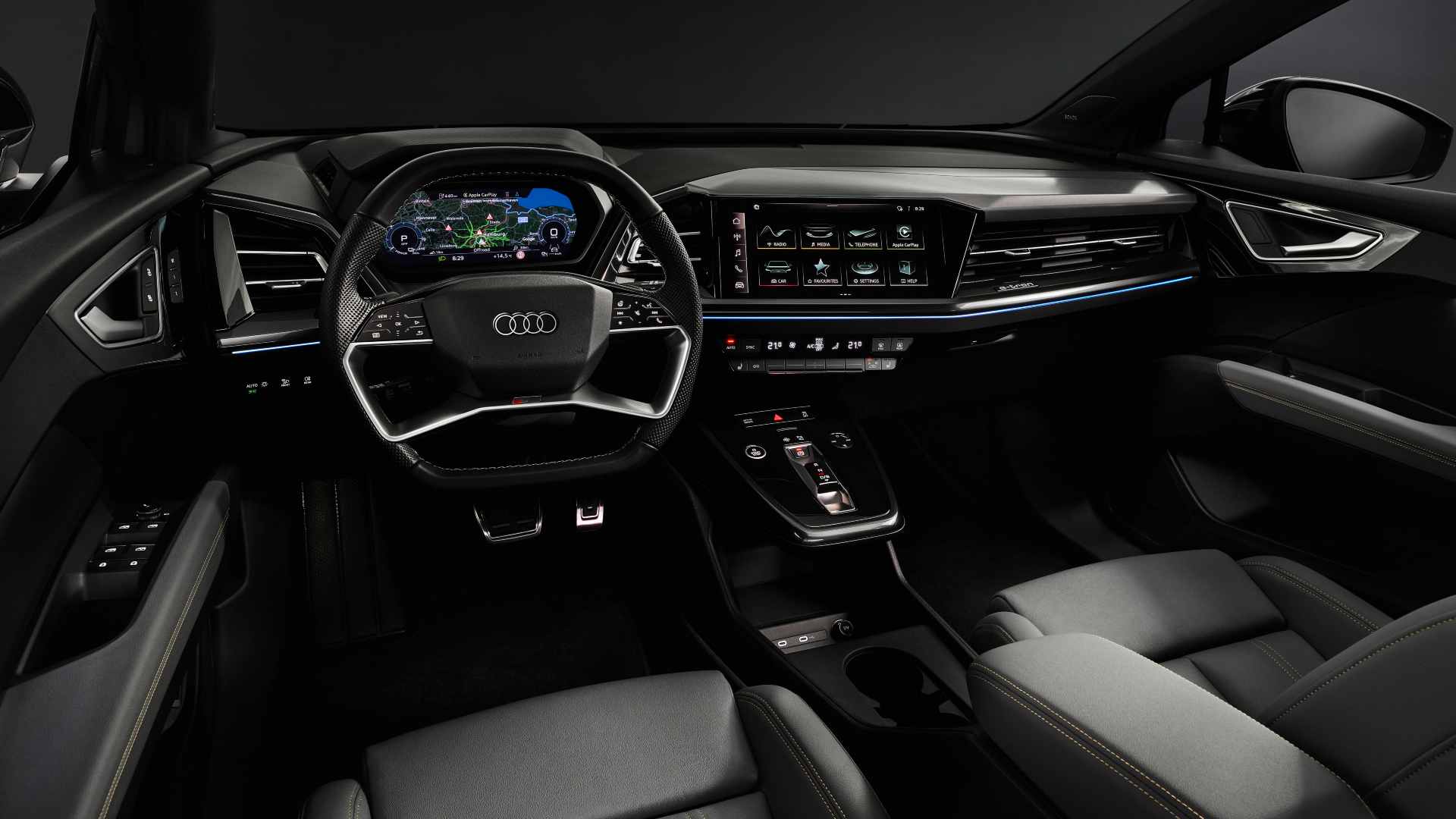 A highlight of the Audi Q4 e-tron's interior is the augmented reality head-up display. Image: Audi

The horizontal theme finds its way to the inside too. Here again, the new EV-focused Audi design theme is quite apparent with the sharply defined, stepped dashboard. The centre console is aggressively angled to the driver and the Q4 e-tron has reverted to a single central touchscreen of up to 11.6 inches. The digital instrumentation features new graphics while the new steering wheel has touch-sensitive controls. Another highlight is the AR-equipped HUD. Keeping with the theme of sustainability, each of the seats of the Audi Q4 e-tron is made from 26 recycled 1.5-litre PET bottles while recycled polyester is used to upholster the seats. Notably, the Q4 e-tron will be carbon-neutral by the time they go on sale.

The Audi Q4 e-tron will launch in Europe in June 2021, with Sportback following in a few months. Prices will start at EUR 41,900 (or around Rs 38 lakh) in Germany, before taxes and duties. There is no word yet on an Indian launch, but with Audi India preparing the e-tron and the e-tron Sportback SUVs for a launch here, these could eventually find their way here, too.