ASUS ZenBook UX435 laptop review: A decent Ultrabook if you ignore the gimmicks

If it wasn’t for the gimmicks, the UX435 would have been a decent enough laptop.

The ZenBook UX435 is an… interesting laptop, to say the least. It looks like a regular laptop and functions like one, and it’s powered by Intel’s “latest” 11th Gen CPUs with their relatively powerful and new Xe graphics chips. Strangely — and I’ll explain why in a bit — the CPU is paired with an Nvidia MX450 GPU.

The gimmick (because there has to be one, duh) is that the touchpad isn’t actually a touchpad. Oh no, it’s a tiny little display that masquerades as a touchpad. If it wasn’t for the gimmicks, the ASUS ZenBook UX435EG would have been a very decent Ultrabook. As it stands, these gimmicks are just frustrating enough to detract from the experience. Image: Anirudh Regidi

The design is the usual ASUS Zenbook fare: shiny black metal with concentric circular patterns on the lid. The 14-inch form factor and nearly bezel-less display is great, and it’s light enough that you won’t really notice it when tossed into a bag.

The display, a 14-inch FHD LCD, is alright. There’s a noticeable amount of backlight bleed and calibration could use some work, but it gets the job done. It covers about 90 percent of the sRGB spectrum so you don’t have to spend your days deprived of colour.

The speakers are quite decent. They’re loud enough that you’ll hear dialogue in a room with an air-conditioner and fan running, but they lack bass and so aren’t well suited for movies or music.

For all intents and purposes, this appears to be a bog-standard Ultrabook. And I’d have been fine with that, if it wasn’t for the gimmicks.

Discrete GPUs are expensive, both in terms of thermals and power draw. A discrete GPU, even a low power one like an MX450 will draw a lot more power and generate a lot more heat (~28 W) than an integrated GPU like the Xe (~12 W).

Given the additional power and cooling requirements, a laptop will have to be designed to deliver that power and dissipate additional heat. In an Ultrabook, this is a big problem because that slim form factor doesn’t allow for passive cooling. The result: a fan that needs to be running constantly to keep things cool, and even more power draw and poorer battery life.

Given the added cost of a discrete GPU, it only makes sense to use one when its advantages are significant, like it would be in a gaming or content creator’s machine.

Benchmarks indicate that the MX450 is about 20–30 percent faster than the integrated Xe graphics, but these results are misleading.

In gaming — the only real use-case for this GPU — performance starts out strong (about 80 fps at 1080p High settings in CS: GO), but drops to the high 40s within minutes. The laptop also gets quite hot and consequently, the fans get a bit loud.

If I switch to Xe graphics, I get a more stable 50 fps average at the same settings. The same can be seen in Shadow of the Tomb Raider, where the MX450 starts out strong, but then immediately drops below Xe graphics performance levels due to the heat.

When it comes to video encoding or rendering in apps like Handbrake and Blender, the MX450 provides little to no real-world benefit. In Photoshop and Lightroom, performance with the MX450 is at par with the Xe graphics chip, and perhaps even a bit slower in Lightroom when the laptop starts getting hot.

If a touchpad isn’t a touchpad, what’s the point?

The other issue is that display that pretends to be a touchpad. The idea is intriguing, but it’s not very useful in practice, and creates more problems than it solves.

The touchpad is too small to be worth using as a secondary display in most scenarios, and having to look down every time I want to refer to something on that secondary display is only a hassle. Even the calculator app isn’t really designed to work on that tiny display, further reducing the utility of the display. 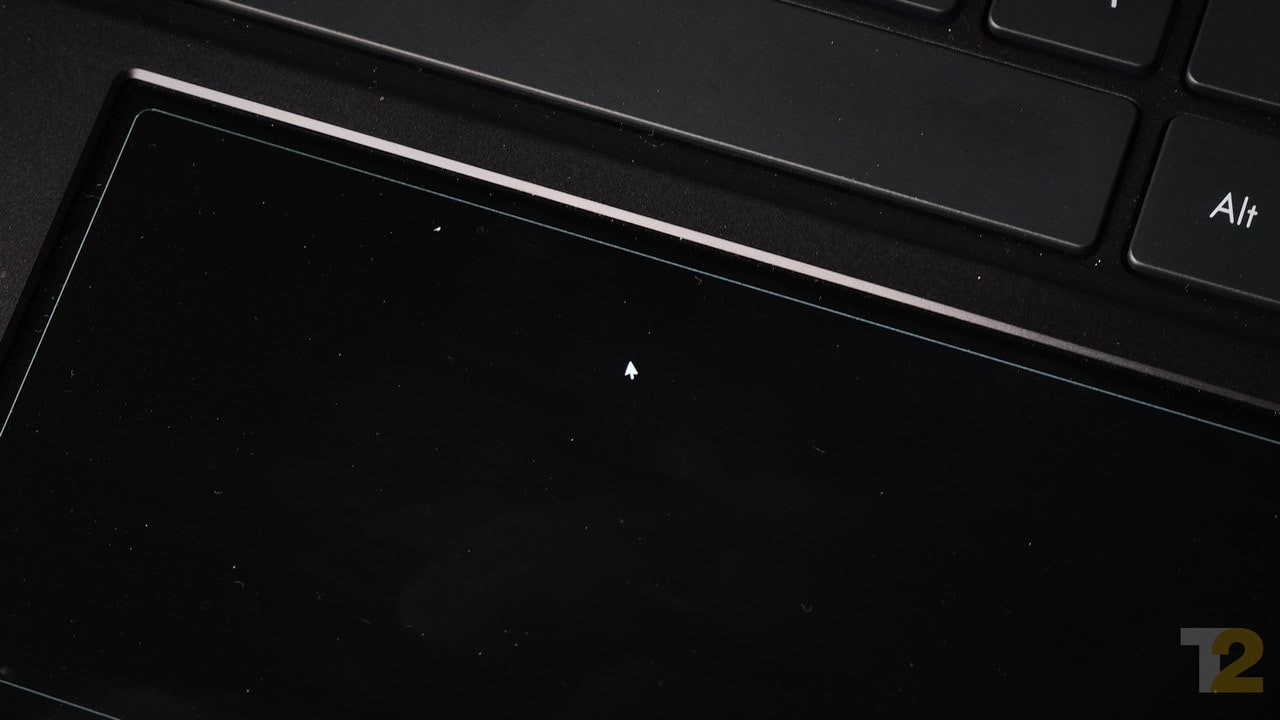 Yes, that is a mouse in the touchpad. I can’t fathom how anyone thought this was a good idea. Image: Anirudh Regidi

Lastly — and this is very irritating — since the touchpad is a secondary display, it’s detected as such in Windows 10. Is that good? Nope. And that’s because this secondary display captures the mouse from time to time. You can also drag the mouse down below the taskbar and have it end up in that touchpad. I can’t tell you how many times I got stuck trying to figure out where my mouse cursor disappeared only to find it hiding in the touchpad.

Another silly “feature” is that by default the touchpad display acts as a shortcut menu and not a touchpad. You have to manually activate the touchpad, or tap the display with three fingers, or manually adjust settings as needed. This secondary display is too small to be useful, and too out of the way to be accessible. It’s also worse as a touchpad, which isn’t at all helpful. Image: Anirudh Regidi

This is just bad design and I hope ASUS cans the concept.

Verdict: It’s the gimmicks that make no sense

If it wasn’t for the gimmicks, the UX435 would have been a decent enough laptop that I wouldn’t have minded recommending for people looking for Windows 10-based ultrabooks. Assuming that the price dropped a bit, of course.

The unnecessary MX450 GPU and the gimmicky touchpad are what hold back this device, and I just can’t see why it made sense to include them in the first place.