Astronomers are eager to study gas giant exoplanet Wasp-127b, which is thought to be filled with metals, and maybe even water: Report

According to a team of astronomers in the University of Cambridge and IAC, in Spain, the exoplanet, WASP-127b has shown possible signs of Water.

WASP-127b is a very unusual exoplanet, and that's what has piqued the interest of astronomers. An exoplanet is simply a planet that resides our Solar System, but what makes 127b interesting is its orbit and its size. 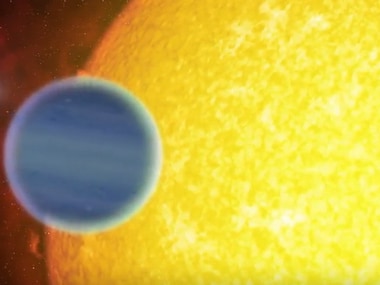 The exoplanet is 1.4 times the size of Jupiter, but only 20 percent dense in comparison to it. It has a surface temperature of 1,127 degrees Celsius, and it takes around four days to orbit its star, WASP-127. Thus making it a giant gas planet.

According to the report in Outer Places, WASP-127b is one of the last places that one would expect to find water, but according to a team of astronomers in the University of Cambridge and the Instituto de Astrofiscica de Canarias (IAC) in Spain, due to the planet being extremely metallic, it is possible that it may contain water.

They were able to analyse this by observing the planet through the 'Gran Telescopio Canaris' in the Canary Islands since the planet has about 50 percent clear skies.

The report also claims that the exoplanet atmosphere is filled with sodium, potassium and lithium. Even the planet's star is full of lithium.

The report further states that researches are "hesitant" of concluding that there is water, but have declared that there are possible signs that the planet may contain water.

The James Webb Space Telescope is scheduled to launch in 2020 and may help in exploring whatever is hidden under the "clear, metallic skies" of WASP-127b.

Here's a video of the WASP-127b orbiting the star.