Asteroid that led to dinosaur extinction increased the Earth's temperature for 100,0000 years: Study

The Chicxulub asteroid — which caused the extinction of dinosaurs — drove a long-lasting era of global warming when it smashed into Earth 65 million years ago.

The Chicxulub asteroid — which caused the extinction of dinosaurs — drove a long-lasting era of global warming when it smashed into Earth 65 million years ago, with a rapid temperature increase of 5 degree Celsius that endured for roughly 100,000 years, a study has found. 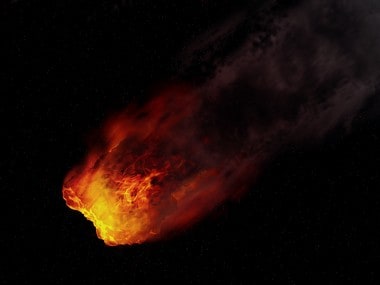 The monumental event is a rare case where Earth's systems were perturbed at a rate greater than what's occurring now from human activity.

It provides valuable insights into what may happen from sudden, extreme environmental changes.

The after-effects of the Chicxulub impact remain debated, with some scientists advocating that soot within the atmosphere blocked out the Sun sufficiently to drive global cooling.

Others suggest that carbon released from the Earth's crust into the atmosphere upon the asteroid's impact, as well as carbon from wildfires, had a warming effect.

To better understand how the temperature changed during this time, researchers —including those from University of Missouri and University of Colorado Boulder in the US — analysed a robust collection of well-preserved, sand grain-sized remains of fish teeth, scales and bone from a site in Tunisia.

These samples retain oxygen isotopic signatures that reveal the temperature at the time that the related animal was alive.

Researchers were able to collect samples from sediments that span the time leading up to the Chicxulub impact, until long afterwards.

Based on their analysis, they propose that global temperatures increased by about 5 degree Celsius and did not cool to previous values for roughly 100,000 years after the impact, a magnitude and duration of warming closely matching levels of carbon dioxide that some types of analyses have estimated were emitted during the same period.