In the inaugural edition of Intel SHIFT, a business focussed initiative from Intel, one technology was the underlying leitmotif - Artificial Intelligence (AI). In the day-long event lined up with talks covering various aspects of how technology will disrupt ways of doing business, artificial intelligence and the insights which machines would be able to derive from big data as well as data analytics was an area of focus. Intel through its various line up of product portfolios such as Xeon processors, non-volatile memory express storage, hybrid cloud to its most recent announcement of the Intel Nervana Neural Network Processor, has partnered with various companies and businesses to help them deploy solutions to stay competitive in the ever-changing digital world we live in.

On the sidelines of the event, we spoke with Amir Khosrowshahi, vice president and general manager of the Artificial Intelligence Product Group (AIPG). Khosrowshahi and his partner Naveen Rao are the founders of Nervana which was bought by Intel in August last year, and which is getting its own processor line now to focus specifically on AI processing. Nervana led to the formation of the AIPG group within Intel. CEO Brian Krzanich while announcing the Intel Nervana NNP family, hinted that it will have multi-generational NNP products to enable new levels of scalability for AI models, helping the company achieve its goal of 100 times greater AI performance by 2020. The first NNP chip will be available to some Intel customers by the end of next year.

According to Khosrowshahi, making the AI-focussed processor is just one part of the story. “It is hard to adopt new technology. So on top of this processor, we have built a full stack of software libraries, machine learning innovations and solutions which can be applied to different domains such as text, speech, and other problems,” said Khosrowshahi.

Intel Nervana NNP aims to provide solutions to businesses working in industries such as financial services, healthcare, automotive, social media and more. Since the acquisition, Nervana apart from getting its own product group is also getting access to Intel’s customers, which help with ensuring an aggressive product cycle for the AI chips, which is expected to have a yearly cadence.

According to Khosrowshahi, the architecture for NNP is built from the ground up for neural networks and its efficiency would improve with time. The first generation of NNP processors was built on TSMC’s 28 nm process just to be on the safe side and ensure things were working. He says that with the Intel backing, NNP would move to a lower process node. Khosrowshahi didn’t commit to an exact roadmap - 14 nm or 22 nm, etc.

Deep learning workloads are expected to intertwine with other kinds of computing. Khosrowshahi gave the examples of AlphaGO AI which uses multiple workloads in its algorithms and even mentioned edge devices such as the iPhone that have multiple function-specific processors inside it. With the NNP, there is a plan to have a family of chips which will fulfil different needs. “It’s a question of mixing and matching. So we have FPGA, Xeon, deep learning technologies which are different functionally. So say in a data centre, we could have a rack of FPGAs alongside a race of deep-learning chips and the enabling technology may not be AI-related at all and can be used for functions such as silicon photonics (an emerging tech where data is transferred among computer chips via laser light),” says Khosrowshahi.

In the panel discussion during Intel SHIFT, representatives from the healthcare and movie business, for instance, stated that they were not technology companies, so deploying and implementing solutions to make sense of big data and using AI was something that needed expert intervention. Would Intel’s role in that case just be to make the chip or to actually identify those specific use cases which industry vertical CXOs may miss out on?

“We work alongside our clients (most of whom aren’t deep-learning companies) to solve issues which they present us with. So the next time they have similar issues, they can take care of it themselves. They can discover ways of improving their processes, but it will take them much longer. Whereas since we already have the underlying technology and have made all the possible mistakes, it is just easier for our clients to let us provide the solutions,” says Khosrowshahi.

Lately, there have been a lot of discussions on the rise of AI. Visionaries such as Elon Musk have even gone to the extent of saying that AI could be vastly more risky than North Korea and has the potential to cause World War III. Khosrowshahi agrees that there are areas of concern and there have to be public policy discussions on it. But he also feels that what Musk is describing are problems which could arise 30-40 years down the line and there are more immediate problems facing us with regards to AI.

“The problems that are of immediate concern and are difficult to address are building AI models which have an inherent bias in them. If you are trying to build a model to solve a problem then you need to ensure that your data set is vast, to avoid any inset of bias, as that could lead to some bad things. The second biggest concern is to do with data privacy. How do you build a model by using someone’s personal data, in a way that it cannot let anyone else reverse engineer it and arrive at deductions? These are the difficult AI-related problems that need to be addressed today,” says Khosrowshahi. 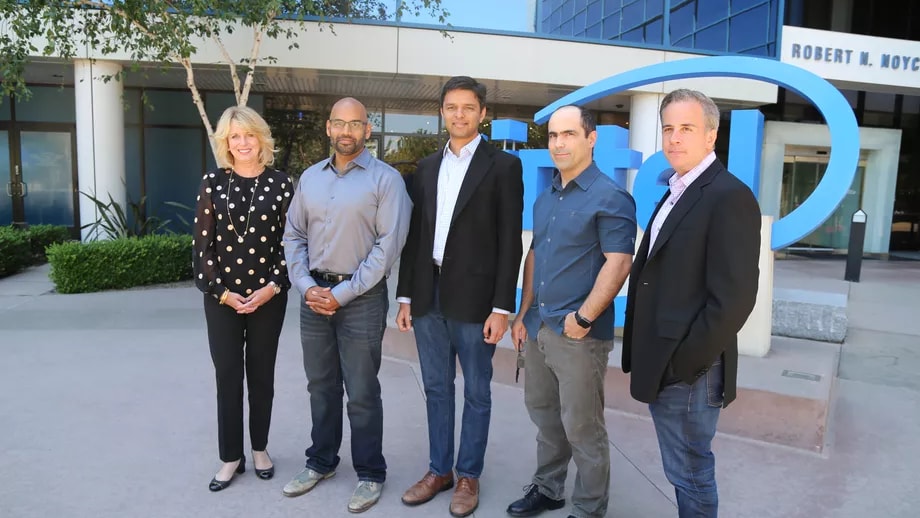 When one talks about processors built specifically for AI and machine learning tasks, one cannot escape Google’s Tensor Processing Unit (TPU) that has been around for a while now. But unlike Intel, the TPU is being used only in Google’s data centres.

Khosrowshahi says that the TPU is an interesting product but it is built to address a Google-specific issue - to resolve the speech workload, which was growing rapidly. “They had a specific workload which they had to accelerate in a limited amount of time. Google does not have to sell the chip to anyone, which is a huge differentiating factor from Intel. TPU is an in-house product custom made for their needs, so Google can make it quickly. The architecture of the TPU is a big memory (SRAM) component and a big systolic array, which has been known for ages. It is not new, but it helps resolve their needs. But it is not general purpose enough for different workloads and will not scale as easily,” says Khosrowshahi.

On being asked if there will be a consolidation in the chipset families going forward, as the AI workloads are going to be a common theme in the future, Khosrowshahi says that it is still early days and Intel would like to have the product differentiation. Intel would want this ideally from a business perspective, as it gives it a larger product portfolio to woo more clients.

“The future would hopefully be more heterogeneous and that is the bet Intel is making. I don’t know what the actual distribution is going to be like. I see our competitors betting on one architecture - scaling it up or down based on their needs. It’s definitely not the right strategy,” says Khosrowshahi.

Disclaimer: The correspondent was invited by Intel to attend the Intel SHIFT conference in New York, USA. All travel and accommodation costs were borne by Intel.