Arm's current gen Cortex A76 CPU is seen on flagship chipsets such as the Qualcomm Snapdragon 855 and the HiSilicon Kirin 980 SoC.

Chip design firm Arm has announced its latest chip architecture for premium smartphones that should be seen on devices by the end of the year or in early 2020. The new designs include the Cortex A77 CPU, Mali G77 GPU and a relatively energy efficient and powerful machine learning processor. Arm's current gen Cortex A76 CPU is seen on flagship chipsets such as the Qualcomm Snapdragon 855 and the HiSilicon Kirin 980 SoC.

Expected to be based on the 7 nm manufacturing process, Arm is promising a 20x improvement on the instructions per cycle (IPC) as compared to Cortex A76 CPU. The Cortex A77 uses the same micro-architecture as its predecessor. The focus this time around is on a more optimal machine learning performance. The graphics chip design, Mali G77 GPU architecture, is expected to offer performance improvements in augmented reality (AR) and virtual reality (VR) experiences. The Mali G77 GPU is based on the Arm's Valhall GPU design and claims to have a 1.4x improvement over the Mali G76 GPU along with being 30 percent energy efficient. 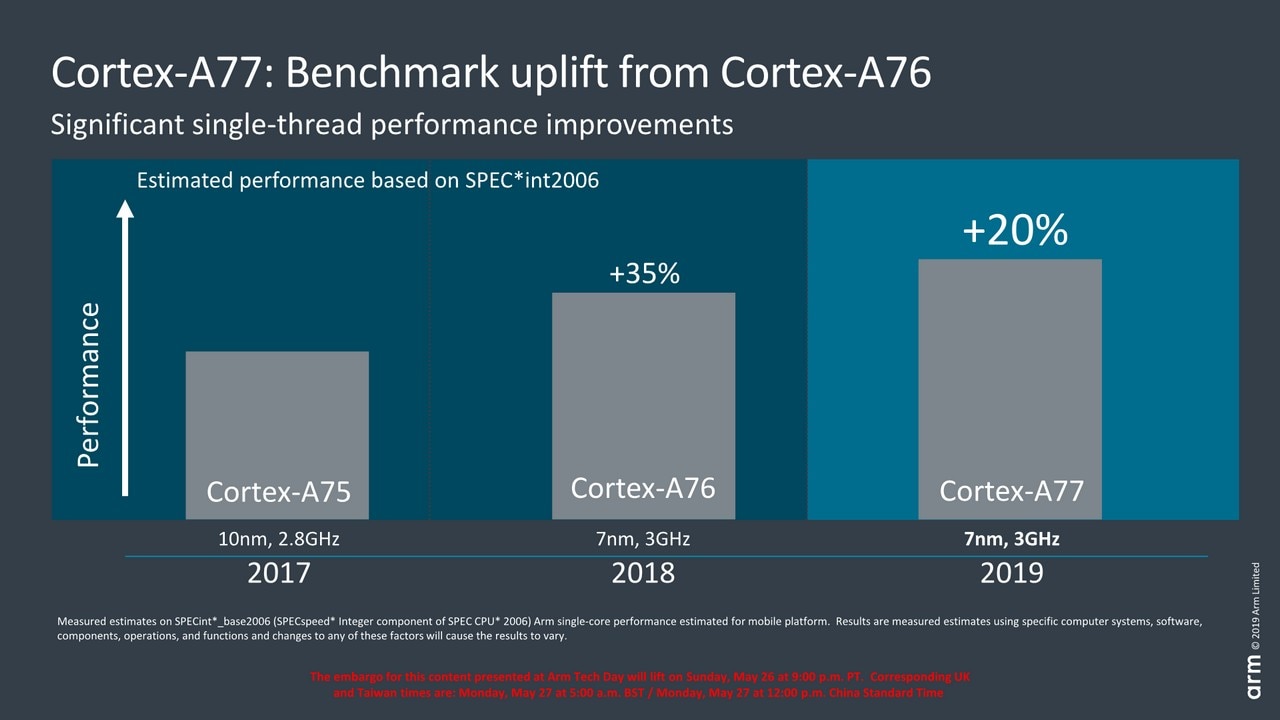 In addition to the CPU and GPU, Arm is also offering a second-generation machine learning processor design which is expected to be twice as efficient as the first-gen. The peak performance claims to offer 5 trillion operations per second (TOP/s) performance which requires 1 W of power.

"For developers, the CPU is more critical than ever as it not only handles general-compute tasks, as well as much of the device’s ML, compute which must scale beyond today’s limits. The same holds true for more immersive untethered AR/VR applications, and HD gaming on the go," said Arm in a press release.

Arm was recently in the news after it announced that it would not be sharing its technology with Huawei and its subsidiaries.

Internal documents from the BBC stated that Arm wanted its employees to “halt all active contracts, support entitlements, and any pending engagements” with Huawei and its subsidiaries. The company memo stated that its designs contain “US-origin technology”. Arm in a statement to BBC said that it was "complying with all of the latest regulations set forth by the US government”. Huawei hasn’t spoken on this yet.

Explained: Could China wage a war against Taiwan?