'Get them aliens': UFO enthusiasts arrive at Nevada to 'storm' Area 51, rumoured to house secrets of extraterrestrial life

Area 51 is a military site was shrouded in secrecy for decades, stoking conspiracy theories of flying saucer remains and alien bodies.

Scores of UFO enthusiasts converged on rural Nevada on Thursday for a pilgrimage of sorts to the US installation known as Area 51, long rumoured to house government secrets about alien life, as law enforcement officials beefed up security around the military base.

Visitors descended early in the day on the tiny desert town of Rachel, a short distance from the military site, in response to a recent, viral social-media invitation to "storm" Area 51 on Friday, raising concerns by local authorities of unruly crowds overwhelming the community. Situated about 240 km north of Las Vegas, the remote hamlet of just 50 year-round residents lacks a grocery store or even a gasoline station.

Thursday’s visitors established a small encampment outside Rachel’s only business — the extraterrestrial-themed Little A’Le’Inn motel and restaurant — parking themselves in cars, tents and RVs. Some tourists hung inflatable aliens from their campers.

One couple, Nicholas Bohen and Cayla McVey, both sporting UFO tattoos, traveled to Rachel from the Los Angeles suburb of Fullerton with enough food to last for a week of car-camping.

"It’s evolved into a peaceful gathering, a sharing of life stories," McVey told Reuters, sizing up the crowd. "I think you are going to get a group of people that are prepared, respectful and they know what they getting themselves into."

Music was scheduled to begin Thursday night and continue for two more days. It remained unclear if there would be a mass trek to the grounds of Area 51 on Friday.

The military site was shrouded in secrecy for decades, stoking conspiracy theories that it housed the remnants of a flying saucer and the bodies of its alien crew from the crash of an unidentified flying object in Roswell, New Mexico, in 1947. The US government did not confirm the base existed until 2013, when it released CIA archives saying the site was used to test top-secret spy planes.

Rachel and its surroundings have nevertheless celebrated their place in UFO lore as a tourist draw. A 158-km road running through the area is dubbed the Extraterrestrial Highway, a purported hotbed of UFO sightings.

In June, California college student Matty Roberts posted a facetious Facebook invitation exhorting the public at large to run into Area 51 on foot to "see them aliens".

When more than 1 million people expressed interest, the US Air Force admonished curiosity seekers not to breach the gates at the military base, which it said is still used to test combat aircraft and train personnel.

Roberts then teamed up with Connie West, co-owner of the Little A’Le’Inn, to plan a music festival in Rachel dubbed "Alienstock".

To all those people planning to raid Area 51 tomorrow, I wish you luck, soldiers! Don’t forget the plan! #Area51 pic.twitter.com/vRJiIraa20

In early September, however, Roberts disassociated himself from the Rachel event, saying it was poorly organized and he feared it could devolve into a public safety crisis. Instead, he helped stage an alternative Alienstock set to take place Thursday night in Las Vegas.

3D plan on how to escape Area 51 after the raid pic.twitter.com/g3i56Ex5CU

West said the event in Rachel would go on as planned.

About 64 km to the east, the small town of Hiko planned an event called "Storm Area 51 Basecamp" at a gift shop dubbed the Alien Research Center. Organizers promised musicians, artists and "prominent ufologists", and by Thursday had sold 3,200 tickets, according to Linda Looney, the shop’s manager.

"This whole thing has been a shock to this little community," she said, adding that organizers had hired 15 security guards and a private ambulance and ordered 80 portable toilets, adding, "It’s going to be really cool. I’m excited."

The influx of alien hunters prompted Lincoln County, which encompasses both Rachel and Hiko, to draft an emergency declaration that could be invoked to call in help from the state. 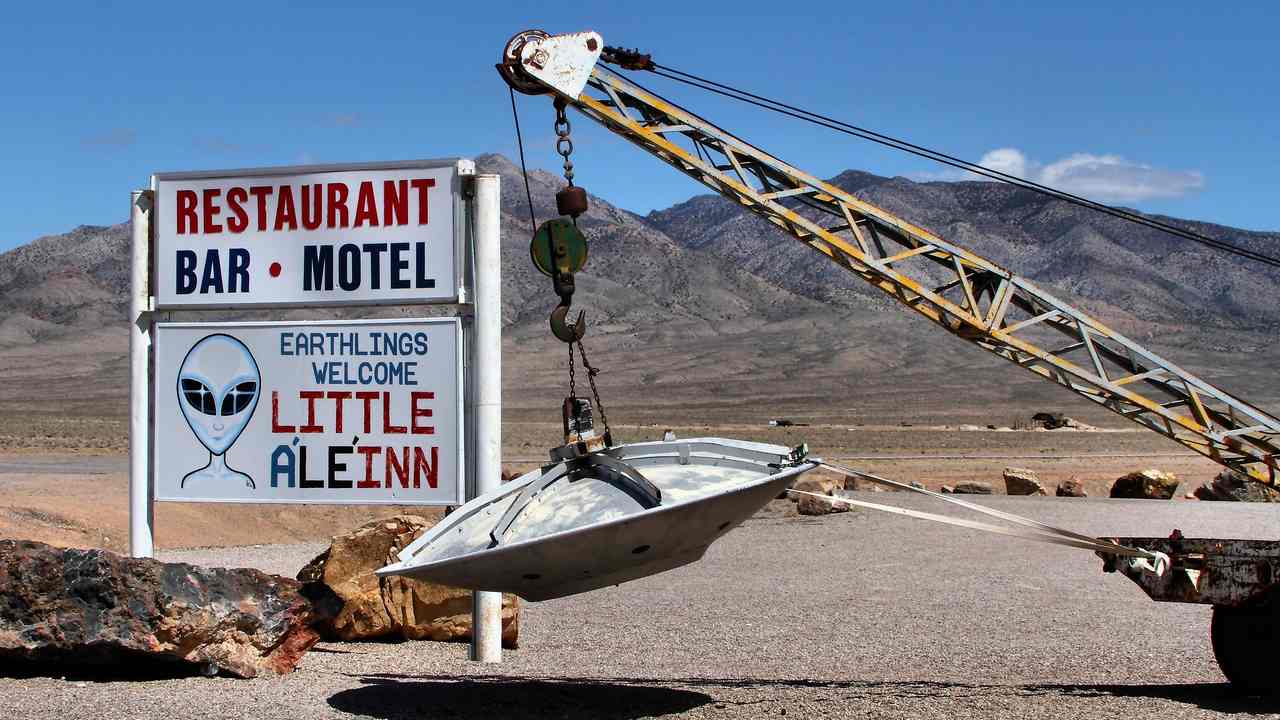 The sheriff’s office said visitors should expect "a large presence of law enforcement". Authorities urged everyone to bring ample supplies of food, water and fuel.

Five sheriff’s patrol cars were posted on Thursday just outside the Area 51 gate, where a handful of people had come to take photos.

Despite a festive, peaceful mood back in town, the official Rachel website was decidedly unwelcoming.

"If any event still happens it is going to be a pretty sad affair with no bands, no food, very little infrastructure and a lot of unhappy campers," it said.