We’ve been hearing rumours of this partnership since the beginning of this year, but given the lack of evidence, dismissed the rumours as being too fanciful

In what is a completely unexpected, and possibly unprecedented move, arch rivals AMD and Intel have partnered to build a single chip for notebooks that combines an Intel CPU with a semi-custom AMD Radeon graphics chip. 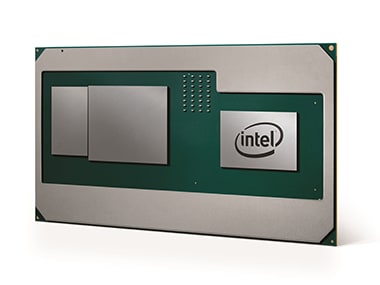 We’ve been hearing rumours of this partnership since the beginning of this year, but given the lack of evidence, dismissed the rumours as being too fanciful. And anyway, hearing of an Intel-AMD partnership is almost as crazy as coming to hear that Samsung’s Galaxy phones will run Apple’s iOS.

As per the partnership details, Intel and AMD are developing a single chip that houses the CPU, GPU and dedicated graphics memory (HBM 2). The advantage of such a design is that the GPU and CPU are much closer together, leading to several advantages including increased bandwidth and reduced latencies, improved power handling, improved thermal management and higher system efficiency.

A traditional laptop with a discrete GPU would normally have separate CPU, GPU and memory dies that are scattered all over the motherboard. Each of this would normally have to be individually cooled, complicating the thermal management of the device.

Intel proposes to put the GPU and its storage on one chip, drastically reducing the size of the overall chipset

To facilitate the new design, Intel is using its EMIB (Embedded Multi-die Interconnect Bridge) technology to connect the GPU to its dedicated memory — HBM 2 (High Bandwidth Memory 2), in this case. Anandtech speculates that since the distance between the CPU and GPU seems a bit high for EMIB, they must be connected via more traditional PCIe lanes.

EMIB is an interconnect technology developed by Intel for connecting multiple chips to each other via a compact and efficient structure. The advantages of this type of structure are many and the interconnect can be used to create scalable designs that can be customised to a customer’s needs, which is exactly what Intel is doing here.

HBM 2 is a very interesting memory chip design that AMD has been using in its graphics cards for at least two generations. Normally, graphics cards use multiple GDDR memory modules that are scattered around a graphics core. In this scenario, the surface area required for the GPU is relatively high. With HBM, it’s possible to stack these memory chips on top of each other, resulting in a graphics memory module that is compact and has a very high bandwidth (hence the name).

According to Intel, the idea behind the deal is to bring the power and performance of a high-end, but chunky, laptop to something like an Ultrabook form factor. Laptops with discrete graphics chips are usually over 27 mm thick, Ultrabooks are usually around 17 mm thick.

Intel says that it will first bring this design to its 8th gen Core family of chips in the H-series SKUs. In layman’s terms, Intel’s latest high-performance CPUs will include AMD graphics chips. H-series chips are 45 W TDP units (Thermal Design Power), which means that these are high-performance units, the likes of which are normally found in mobile workstations and gaming notebooks. Devices like MacBooks and Dell XPS 13s use U series Intel chips which are rated at a 15 W TDP.

Anandtech’s report suggests that rather than a true design partnership, Intel is purchasing graphics chips from AMD. The report speculates that Intel is likely licensing EMIB technology to AMD to enable it to connect its GPU and memory. These licensing terms likely restrict AMD’s use of EMIB only to those chips sold to Intel. AMD will, of course, be providing Intel with the required drivers. 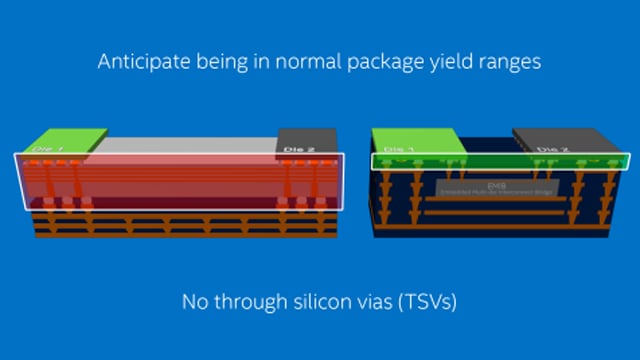 A render showing the structure of an EMIB implementation vs a traditional interconnect. Image: Intel

Intel has apparently purchased multiple SKUs from AMD, meaning that we will see multiple designs and hopefully, even U-series Intel chips with AMD graphics units.

Intel currently includes its own integrated graphics technologies on its own CPUs. These graphics units are more suited for high-resolution video playback and very light gaming. The criteria here is power efficiency rather than performance.

Integrating an AMD GPU with an Intel CPU could be the perfect compromise. In fact, Intel specifically mentions a new power sharing framework for the chips, and if Anandtech is right about the PCIe lanes, this means that Intel can easily support graphics switching technologies.

Intel and NVIDIA currently have a technology-sharing partnership, and until now, Intel CPUs with discrete NVIDIA GPUs has been the way forward for all high-performance systems. However, Intel and NVIDIA haven’t been on good terms for many years now, which is a possible reason for Intel’s switch to AMD as a graphics provider.

Apple, one of the largest consumers of Intel’s chips, also favours AMD for GPUs, hinting at a possible Apple connection to this deal.